The Ford Contour was a North American variant of the European Ford Mondeo sedan sold by Ford Motor Company. It was sold in North America from 1995 through 2000. The platform also underpinned a Mercury version called Mystique and the 1999 to 2002 iteration of the Mercury Cougar.

Ford introduced the Contour to the North American market in late 1994 to replace the aging Tempo. Development of the Contour, the nearly identical Mercury Mystique and the Mondeo in Europe was a major project for Ford Motor Company; reportedly US$6 billion was invested in the development of the CDW27 platform. The Contour filled the market and size gap between the Escort and the larger Taurus. The Contour was slightly larger than the Tempo and was only available as a sedan. By contrast, the European Mondeo was also available as a hatchback and a wagon. 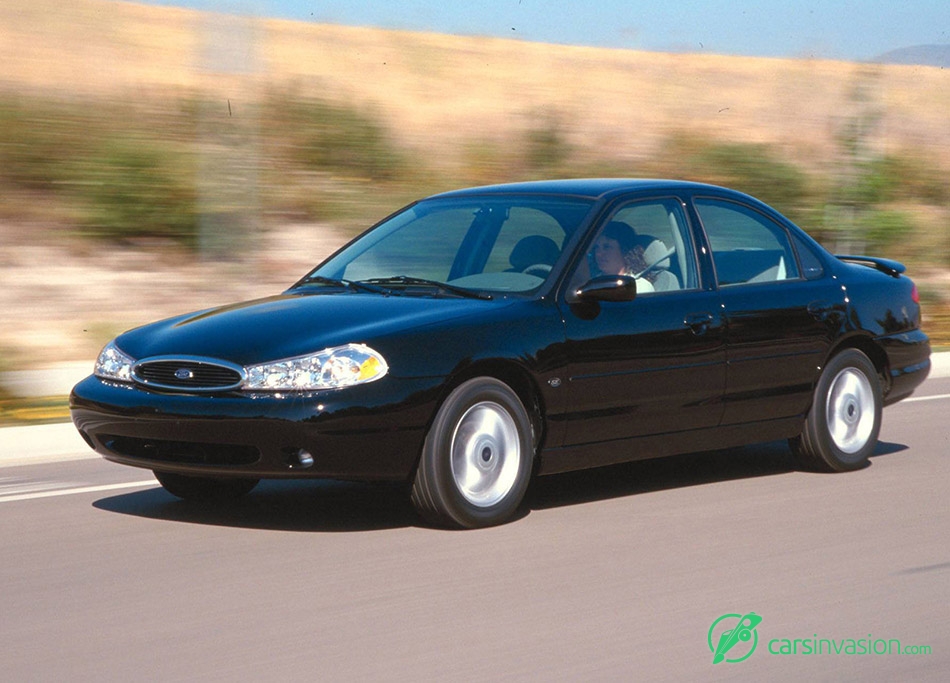 Initially, three trim levels were available; a base GL, a more luxurious LX and a sporty SE trim. A 125 hp, 2.0 L Zetec inline four-cylinder engine was standard on the GL and LX models, while a 170 hp 2.5 L Duratec V6, originally designed as a Porsche project before it was sold to Ford, was standard on SE models and optional on the LX model. A 5-speed manual transmission was standard on all models, with a 4-speed automatic as an option. Prices ranged from about US$14,000 for base GL versions to just under US$20,000 for an SE with all available options.

In 1998, Ford restyled the Contour and added the SVT version, which utilized a specially tuned and modified version of the 2.5 L V6 that produced 195 hp and was only available with a 5-speed manual transmission. The restyle was based on the facelifted Mondeo which had been launched in Europe two years earlier. Also included with the SVT Contour was new bodywork, seats and trim, white-faced gauges, larger wheels with ultra high performance tires, upgraded brakes and a retuned suspension. Slowing sales in later model years prompted Ford to cut back production of the Contour, and by 2000 only the SE model and the SVT version remained. The SVT Contour was available primarily by special order by specially designated Ford dealerships.

End of the Contour

After the 2000 model year, the Contour was cancelled because of decreasing sales. Many editors remarked that the car, sized for Europe, had a small interior compared to peers such as the Dodge Stratus, though many praised the car for its European handling and V6 power. Japanese carmakers Toyota and Honda offered each only one compact and midsize sedan. In the Ford lineup, the Contour was replaced by the Ford Taurus SE (a Taurus trim line, which was introduced in 1998). Those looking for a mid-sized car tended to purchase the larger Ford Taurus, while those looking for a small sedan tended to purchase the Escort. The Kansas City plant was then retooled to build the Ford Escape. Despite the car's relative unpopularity in terms of sales, it has obtained a cult following in the US, the SVT versions in particular.