Since its dramatic 1964 introduction, Ford Mustang has been the icon of American performance with its bold style, brawny engine and rear-wheel-drive excitement.

The legend continues in the 2005 model with an all-new platform and clean-sheet design that makes it faster, safer, more agile and better looking than ever.

The new Ford Mustang is pure American muscle. The signature long hood and short rear deck capitalize on 40 years of history, as do classic design cues that have defined Mustangs since the 1960s: C-scoops in the sides, three-element taillamps and a galloping horse badge in the center of the grille. The Ford Mustang's menacing shark-like nose imparts an attitude not seen since the 1967 model, while jeweled, round headlamps in trapezoidal housings are part of its striking new modern architecture. 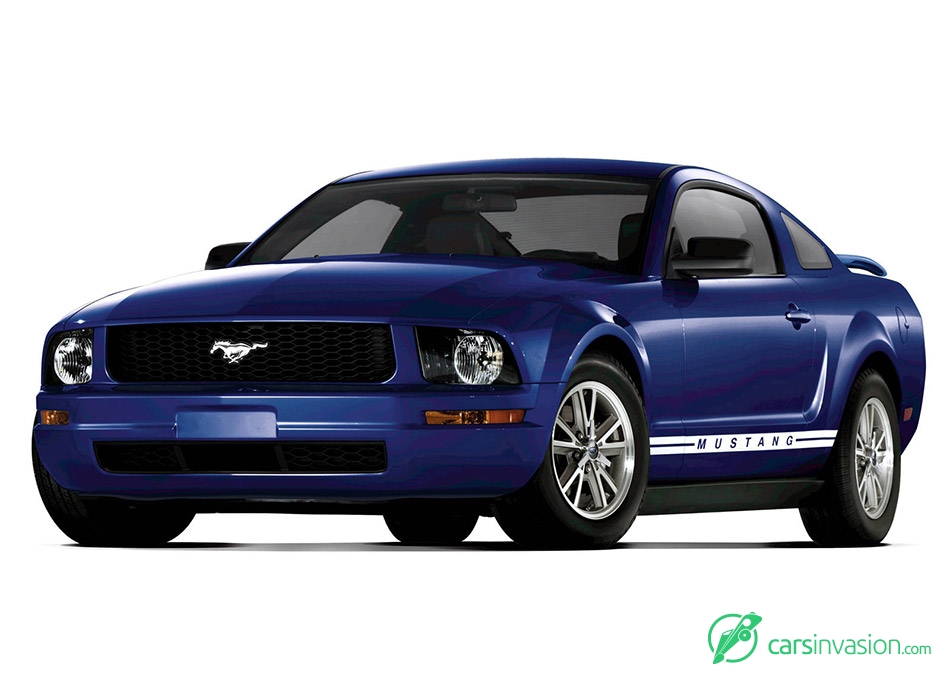 The 2005 Ford Mustang has an aggressive rake that puts the car in motion even when it's standing still. The wheels were pushed to the corners of the body, better anchoring it visually and physically to the road. The 6-inch wheelbase gain over the 2004 Ford Mustang makes it look bigger than life.Design influences of the 2003 Ford Mustang GT Coupe Concept are clearly visible.

The industry-first, color-configurable instrument panel offers the ultimate in personalization. Ford Mustang owners can mix and match lighting at the touch of a button to create more than 125 different color backgrounds to suit their personality, mood, outfit or whim. The colors, set against a striking backdrop of aluminum panels spanning the dashboard and dual chrome-ringed gauges, add a look of technical precision.

These modern touches mix with Ford Mustang history and heritage. Chrome-ringed air vents are aligned vertically across the dash, precisely in line with the gauges, and the steering wheel has three spokes with a center hub marked by the horse and tricolor bars logo, echoing the design of the 1967 Ford Mustang.

Muscular new engines infuse Ford Mustang with tire-smoking performance. The 4.6-liter all-aluminum V8 that powers the 2005 Ford Mustang GT has three-valve heads and cranks out 300 horsepower. Because it has an aluminum block, it weighs 75 pounds less than a comparable cast-iron design while delivering 40 more horsepower than the 2004 engine. That's more than 50 percent more power than the small-block 289-cubic-inch V8 found in the classic 1964 Ford Mustang.

The standard engine is a 60-degree 4.0-liter SOHC V6. It replaces the 3.8-liter 90-degree pushrod engine in the 2004 model. The 210-horsepower, 240 pound-feet engine - gains of 23 horsepower and 15 pound-feet - is inherently smoother and more compact, providing more power and torque.

For the first time, Ford Mustang is available with a five-speed automatic, which provides a unique combination of off-the-line jump and good highway fuel economy.

Five-speed manual transmissions are standard. The V8 powered Ford Mustang GT is equipped with a rugged Tremec 3650 gearbox, while V6 cars get a Tremec T-5 manual.

The chassis is new from the ground up, with MacPherson-strut front suspension using reverse "L" lower control arms, which deliver both comfort and control.

For 2005, Ford Mustang's rear suspension has new three-link architecture with a lightweight, tubular Panhard rod that provides precise control of the rear axle. This technology stabilizes the rear axle as the wheels move, particularly during hard cornering.

The standard four-wheel disc brakes have the biggest rotors and stiffest calipers ever fitted to a mainstream Ford Mustang. Twin-piston aluminum calipers clamp down on 12.4-inch ventilated front brake discs on Ford Mustang GT models - an increase of more than 15 percent in rotor size. The V6 Mustangs get 11.4-inch ventilated rotors that also are 30 mm thick.

In the rear, the brake rotors are 11.8 inches in diameter - more than 12 percent larger than on the 2004 model. Rear rotors are vented on the GT and solid on the V6.

An optional four-channel anti-lock braking system is available for a greater degree of brake control. It uses electronic sensors to constantly monitor road conditions and feed the information to a dedicated control computer capable of determining, within milliseconds, whether the vehicle is on dry pavement or negotiating a slippery surface. When traction control isn't desired - like when a smoky burnout at the drag strip is in order - drivers can deactivate the system with a simple button on the instrument panel. 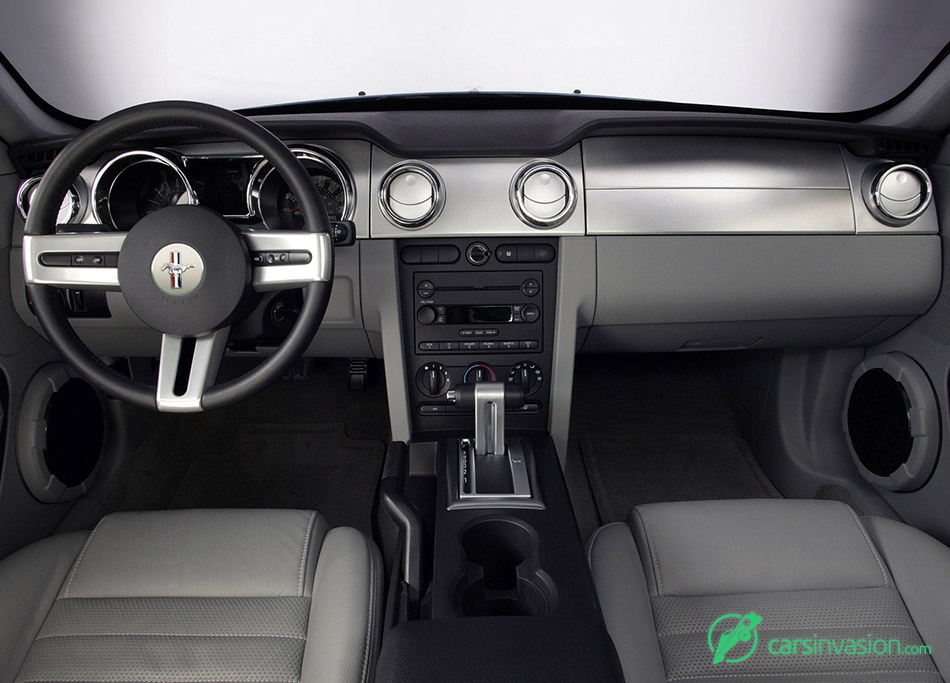 Standard occupant classification sensing builds on the strength of the Personal Safety System™ to tailor deployment of the front-passenger air bag. If the passenger seat sensor detects no weight - or very little weight, like a briefcase - the passenger air bag is automatically switched off. If more weight is on the seat, like a small child, the air bag remains deactivated and an instrument panel light alerts the driver. If an adult is in the passenger seat, the air bag automatically switches on.

An optional active anti-theft package offers customers a new level of security. It includes a sensing module to guard against tow-away thefts, an interior motion sensor to detect "smash-and-grab" break-ins, a separate alarm sounder - instead of vehicle horn - to thwart thieves trying to disable the horn and a high-capacity, 60-ampere-hour battery that sounds the alarm longer.

2005 Ford Mustang - an all-new version of America's best-selling sports car - was priced at $19,410 for the V6 Coupe. The V8 powered Ford Mustang GT prices started at $24,995, making it the most affordable 300-horsepower sports car in the industry.