In a flowing transition, Mercedes-Benz lands the next coupe: the GLC Coupé Concept is a near-production-standard study that carries the successful GLE Coupé formula over into a more compact segment. The dynamically expressive show car combines typical stylistic features of a coupé with the sensually pure design idiom of coming SUV generations. This emotively appealing fusion is further enriched with details that are strong in character. A twin-blade radiator grille, powerdomes on the bonnet and a four-pipe exhaust system form an aesthetic contrast to the harmonious, almost organic main body section. On the other hand, elements from the rugged off-road world, such as enormous 21-inch tyres, front and rear underbody protection, increased ground clearance and side running boards, are indicative of the off-road performance potential of the GLC Coupé Concept.

Gorden Wagener, Head of Design at Daimler AG, puts it in a nutshell: "With its modern and sensual design idiom, the GLC Coupé Concept gives a foretaste of future SUV models from Mercedes-Benz. At the same time, it embraces the typical values of tradition-steeped Mercedes-Benz coupés". 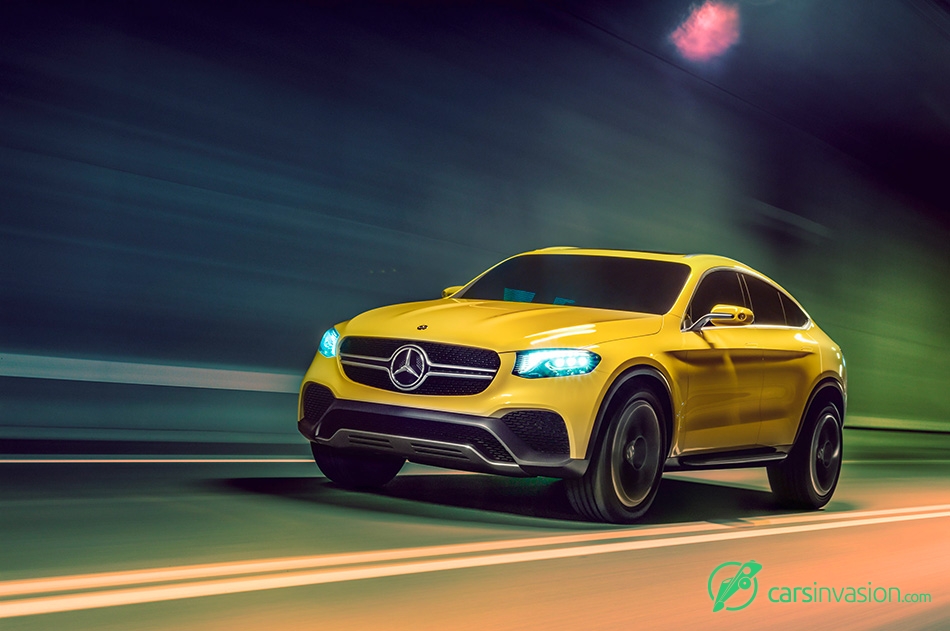 The same successful blend of the multifunctional SUV and the emotively appealing coupé world of Mercedes-Benz that was so enthusiastically welcomed with the GLE Coupé is now repeated with the GLC Coupé Concept. However, the near-production-standard show car inhabits a more compact segment, as demonstrated by the external length of 4.73 metres and the 2.83-metre wheelbase. These two dimensions, together with the striking and muscular main body section, elongated greenhouse and large 21-inch wheels, provide an ideal basis for the typical, almost dramatic proportions of the sportily youthful coupé generation with the characteristic off-road touch.

At the front, a short, crisp overhang with upright radiator grille and twin-blade louvre so characteristic of sporty Mercedes-Benz models give a first indication of the sporty philosophy behind the GLC Coupé Concept. The credo "Born to race on every ground" is confirmed by the powerdomes on the bonnet, the sweeping lines of the A-wing below the radiator grille, the large side air intakes and the visually dominant underbody protection. Like all the trim elements on the concept vehicle, this typical SUV feature radiates in silver shadow to form an attractive counterpoint to the solar-beam paintwork and the all-round claddings in matt gun metal magno paintwork.

Reminiscent of light sculptures, striking LED headlamps decisively shape the expressive face of the GLC Coupé Concept. All functions are united in one housing: for illumination, the daytime running lamps and turn indicators use the upper strip inserts, dubbed "eyebrows" by the designers. Below them are three rotating lenses, which appear to positively float in the deep, three-dimensional space and which adapt to the situation to optimally illuminate the road or terrain. Of course, the headlamps are non-dazzling for oncoming traffic in lower beam, upper beam, cornering light or active light mode. This is achieved by blanking out the light cone in the area of oncoming vehicles.

Side profile with low-slung coupé greenhouse and large SUV wheels

The perfection with which the intrinsically contrary design worlds of the coupé and the SUV have been brought into harmony with each other is revealed in particular by a side view of the just under 1.60-metre-high GLC Coupé Concept with the typical, elongated roof line of a sports coupé. Like the integrated roof rails and fully recessed door handles, the squat greenhouse with its frameless side windows blends perfectly into the vehicle's flanks to additionally underscore the coupé-like character. The interplay with the high beltline, wide shoulders and accentuated wheel lips gives rise to extreme proportions that lend the GLC Coupé Concept a thrilling dynamism. This highly charged interaction is given extra emphasis by the drawn-in waist between the dropping line and the lower, rearwards ascending light-catching contour.

A clear indication of the more prominent SUV genes is given by sill extensions reminiscent of the side running boards on a classic SUV. Flush with the outside edge of the body, wide 21-inch wheels with large, heavily profiled tyres combine with the relatively high ground clearance to endorse the sportily dynamic off-road ambitions of the GLC Coupé Concept.

The rear view of the precisely two-metre-wide GLC Coupé Concept in particular reveals the wide, muscular shoulders with harmoniously modelled wheel arches that house 53.3 cm (21-inch) wheels with 285/45 R 21 wide-base tyres. The four polished stainless-steel tailpipes of the exhaust system provide a visual highlight. Mounted in pairs above an A-wing similar to the one at the front and featuring characteristic underbody protection, the tailpipes underscore the sporty look of the coupé.

Overall, it is the styling of the rear end that most clearly accentuates the coupé genes of the concept vehicle. Narrow, split tail lights, centrally positioned brand star and a sharp spoiler lip emphasise a design line that made its debut with the S‑Class Coupé and which all Mercedes-Benz coupé models have since followed. Relocated to the lower section of the bumper, the number plate as well as the typical form of the rear window with its rounded upper area are among the further stylistic features.

The night design of the LED tail lights sets a new tone. Adapted from the headlamps, the strips at the top are home to the turn indicators, which use chasing lights to signal a change of direction. A circular rear light encloses a central lens that adaptively augments the brake lamp for even better visibility. 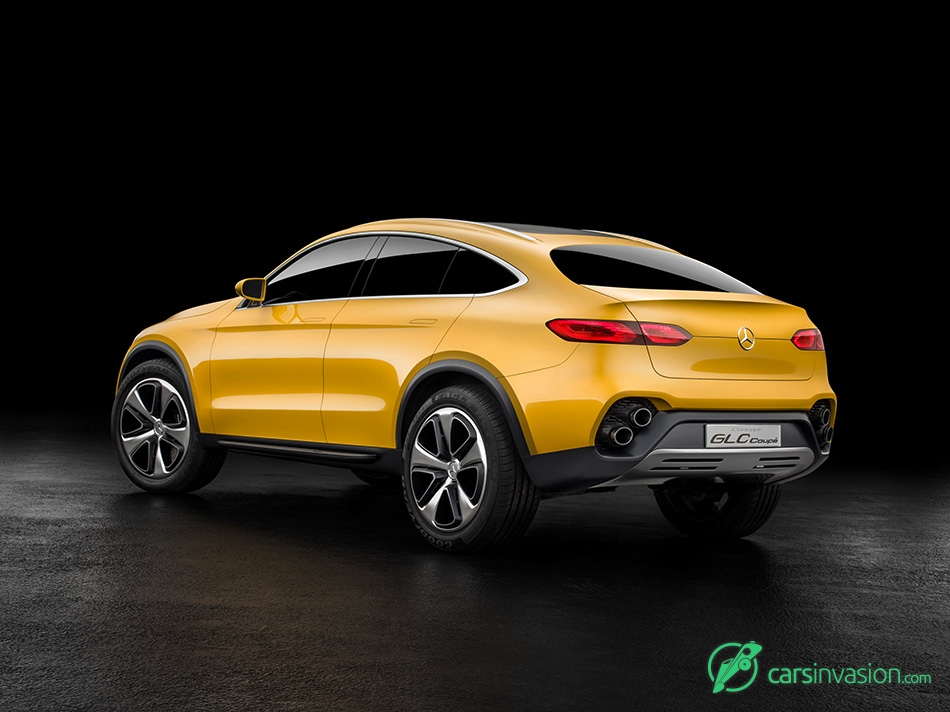 Hard technical details give an additional emotive appeal to the GLC Coupé Concept with its almost organic form of the main body section. For example, excitingly designed components such as two-part, open light-alloy wheels, wing-look exterior mirrors and the already mentioned four exhaust tailpipes set a deliberate stylistic contrast intended to underscore the technological claim of the show car. The same goes for the underbody protection with front and rear cooling ducts and the headlamps and tail lights, which resemble light sculptures.

The drive technology aboard the GLC Coupé Concept matches the vehicle's looks. A V6 powerplant delivering 270 kW (367 hp) and 520 Nm makes for a highly sporty level of performance. Familiar from AMG sports models, the direct-injection biturbo engine is teamed with a 9G-TRONIC nine-speed automatic transmission and 4MATIC permanent all-wheel drive to provide the show car with emphatic acceleration while at the same time giving an acoustically audible note to the impressive performance. Depending on the transmission mode setting, the tailpipes give off either a commandingly subdued rumble or the passionate sound of a high-powered sports car.

Extension to the SUV world of Mercedes-Benz

The SUV world of Mercedes-Benz has room for further models, such as a production version of the GLC Coupé Concept. The range would thus include seven models, allowing customers to order a tailor-made vehicle to suit their personal preferences. At the same time, the show car would enrich the trendsetting coupé world of Mercedes-Benz with a new all-rounder while providing a logical addition to models such as the four-door coupés and Shooting Brakes of the CLS and CLA series. In addition to spawning entirely new classes of vehicle, these model series have also exerted a considerable impact on the model policies of all manufacturers. They have also proved an outstanding success on the sales front.