Ford and Shelby Automobiles are at it again, this time in celebration of the fortieth anniversary of the 1968 Shelby Cobra GT500KR. Unveiled at the 2007 New York International Auto Show, the 2008 Ford Mustang Shelby GT500KR — the most powerful Mustang to date — will once again mark Mustang as 'King of the Road.'

"I'm proud to once again be a part of an historical moment, bringing back the 'King of the Road' Mustang, and collaborating with Ford SVT and Ford Racing" said Carroll Shelby. "I'm committed to continuously upping the ante when it comes to performance, and it's great to be doing it with Ford." "The return of the Shelby GT500KR further establishes Mustang as the true king of the pony car segment," said Robert Parker, manager of Ford Car Brand. "With the unveiling of the new KR we are staying true to the promise we made our loyal Mustang fans to continue Mustang's prowess by bringing new, exciting and more powerful Mustangs to market."

Forty years ago, at the 1967 New York Auto Show, Ford introduced the most powerful Shelby Mustang ever. Like every Mustang that bore the name 'Shelby,' the GT500KR carries with it its own unique story.

The 1968 Shelby Cobra GT500KR was a mid-year introduction, based on the 1968 Shelby GT500. Ford added 'Cobra' to the Shelby's moniker to help usher in the beginning of a new performance era at the company. The Cobra name referred to the new 428 Cobra Jet V-8 that was planted under the KR's custom fiberglass hood. It was the engine that would once again vault the Mustang to the head of the pack. 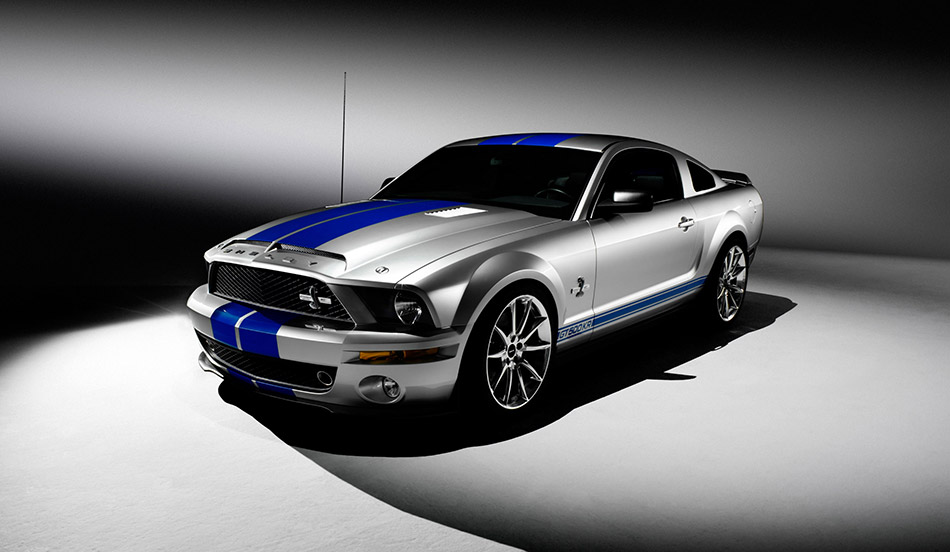 Ford conservatively rated the 428 CJ at 335-horsepower, but in reality it made more than 400-horsepower and 440 pounds-feet of torque. The KR model was also equipped with a modified suspension and was offered both in fastback and convertible models. Ford dealers sold 1,570 GT500KR models in 1968, 1053 fastbacks and 517 convertibles.

While the name 'King of the Road' may have been the perfect fit for the world's most powerful Mustang, it also provided Shelby the chance to steal the thunder from cross-town rival General Motors. As the legend goes, Shelby learned that GM was planning to introduce a high-performance model and call it 'King of the Road.'

Since he had always wanted to use the name, and as one to never miss an opportunity, Shelby set his organization in gear, registering the name and designing new badging for the Cobra Jet-powered Mustang, christening it the GT500KR, and bringing Ford's 'King of the Road' to market before GM ever got a chance to apply the name to their product.

Just like its 1968 namesake, the 2008 Ford Mustang Shelby GT500KR builds on the strong foundation of the Shelby GT500. Packing 40 more horses under its custom-designed carbon composite hood, the GT500KR is the most powerful production Ford Mustang ever produced.

The modern Shelby Mustang line-up started with the 2007 Shelby GT500 coupe and convertible. With the launch of the 2007 Shelby GT, the 2008 Shelby GT500KR becomes the third production high-performance Mustang brought to market through the relationship of Shelby Automobiles and Ford. Ford and Shelby Automobiles also partnered up with Hertz to produce a special limited run of 500 Shelby GT-H "rent-a-racer" Mustangs available only for rent.

The 2007 Shelby GT500 has been one of the most successful vehicle programs in the 14-year history of Ford Special Vehicle Team (SVT) and that success has opened the door for more performance collaborations with Shelby Automobiles and Ford Racing. Working together, these three performance powerhouses are driving Mustang momentum on the street and on the racetrack. Dealers cannot keep the cars on their lots, customers are clamoring for more, and racers are bringing home championships.

Shelby Mustangs have already achieved some impressive highlights showcasing an enthusiast demand that is unmatched in the business:

The Shelby GT500KR will be produced in an exclusive run of 1000 units and will begin arriving in Ford dealers in the spring of 2008.

Crowning the New "King of the Road"

Doug Gaffka, Ford SVT chief designer, and his team worked closely with Carroll Shelby and the Shelby team to make certain the new KR was crafted in the spirit of the original Shelby muscle car.

"This was a great effort between Ford and Shelby Automobiles," said Gaffka. "The Shelby team and I were in constant contact melding Carroll's classic design cues with some modern concepts and ideas and finessing them into the design of the new KR."

Gary Davis, vice president of production and product development for Shelby Automobiles, played a key role in defining the look of the custom designed carbon composite hood for the GT500KR. His knowledge of the original GT500KR helped sculpt a modern interpretation of the original's bulging hood scoop, a visual indication of the extra horsepower packed beneath it. The hood is secured by a pair of stainless steel, twist-down hood pins. The composite front valance houses a pair of chrome-trimmed, functional brake ducts to cool the large 14-inch, vented Brembo front brakes.

Side stripes are true to the original KR right down to the font used for the 'GT500KR' lettering, while the classic LeMans-style striping that races down the center of the car has been deleted between the leading forward edge of the hood scoops and the front of the hood, accenting the scoops and giving the KR its distinctive face. "That was Shelby's idea," said Gaffka. "It's a special touch that adds some down-the-road differentiation. There will be no doubt that it's a 'King of the Road' Mustang that's filling up your rearview mirrors."

Each KR model is identified by special 40th Anniversary KR badges on the fenders and grille, distinctive body colored mirror caps and Shelby lettering stretching across the front of the hood and along the rear portion of the deck lid. A special Shelby VIN tag is affixed to each vehicle, mounted in the engine compartment. 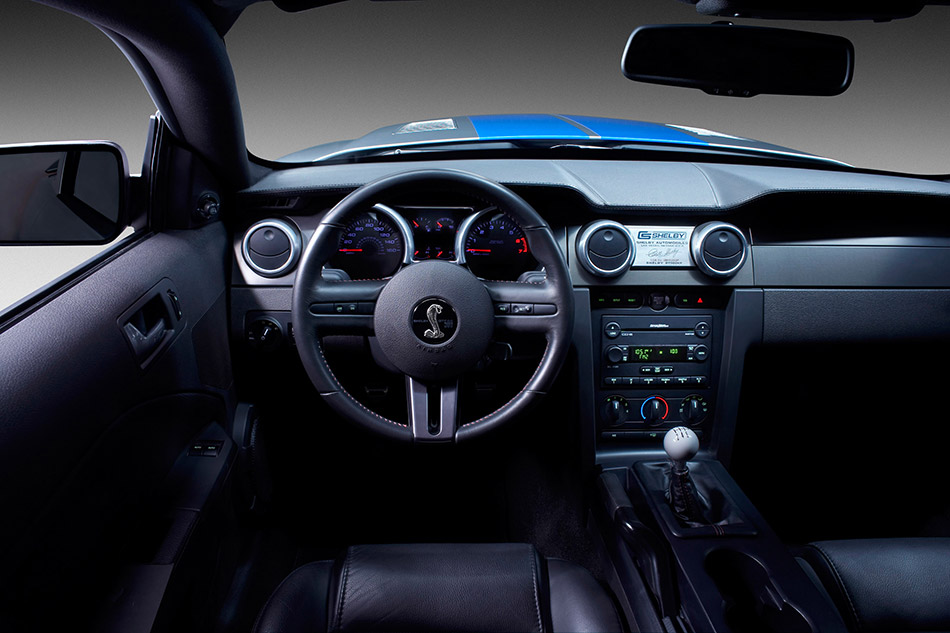 The KR's 5.4-liter V-8 Gets the Royal Treatment

Just like its namesake, the 2008 'King of the Road' packs a walloping dose of Ford performance power under its massive composite hood scoops. The Ford SVT-engineered 5.4-liter supercharged V-8 is treated to a Ford Racing Power Upgrade Pack that boosts horsepower to an estimated 540 and torque to 510 ft.-lbs., thanks to revised ignition and throttle calibration and a cold air intake system that replaces the stock unit.

Calibration modifications include advancing the ignition timing as well as re-mapping of the electronic throttle settings to provide quicker throttle response for better off-line and mid-range acceleration. Increased throttle response will be met with a sharper roar from the Ford Racing-inspired exhaust system.

Power is delivered to the rear wheels through a Tremec TR6060 six-speed manual transmission and 3.73:1 rear axle ratio, upgraded from the standard GT500's 3.31:1. Gear selection is courtesy of an all-new Ford Racing short-throw shifter making its debut on the KR. Topped with a white ball, the new shifter is 25 percent shorter than the unit on the GT500 providing for crisper, sharper shifts.

Ford SVT, Ford Racing and Team Shelby worked together to develop the KR's suspension tuning. Based on initial work by Ford Racing and the team at Shelby, often at Shelby's own facility on the grounds of Las Vegas Motor Speedway, Ford SVT chassis engineers will apply fine tuning techniques to prepare it for the streets.

"The production Shelby GT500 was maximized to deliver the perfect balance between ride and handling," said Jamal Hameedi, chief nameplate engineer, Ford SVT. "In that same ride versus handling continuum, the KR will lean heavier towards all-out handling while still making it drivable on the street."

Chassis engineers worked closely with the engine department in a holistic approach to the development of the KR, tuning the suspension to best optimize the engine enhancements.

"We aren't fixing our attention on one or two attributes, but working on the vehicle as a whole," stated Gary Patterson, vice president of operations for Shelby Automobiles. "The throttle response, power delivery, exhaust note, and handling should all gel together to deliver a total driving experience."

The GT500KR will feature unique spring rates, dampers, stabilizer bars, and strut tower brace, all designed specifically for the KR, to deliver the precision handling package.

Unwilling to wait for the impending pony car war to heat up, Ford is extending Mustang's leadership position by feeding the enthusiast demand for more models, features, performance parts, and special editions. Ford has committed to at least one new Mustang 'feature' vehicle per year. For 2007, it is the Shelby GT, and for 2008, there will be at least two including the Ford Mustang Shelby GT500KR and the previously announced Mustang Bullitt. Ford's 'Steed for Every Need' strategy currently offers four horsepower options for Mustang, with pricing from $19,995 for a 240-hp V6 Mustang coupe to $46,500 for a 500-hp Shelby GT500 convertible.