2010 Ford Escape, the small SUV with the best crash test ratings of any vehicle in its class, is increasing its technology leadership with the addition of five new features that improve safety, reduce driver distractions and aid drivers by automatically parallel parking their vehicle.

The new Ford Escape, in showrooms this summer, will add MyKey™ teen-safety technology, Integrated Spotter Mirrors - both offered standard (MyKey on XLT and above models) - optional Rear View Camera System and SYNC with real-time Traffic, Directions and Information. The new model also will be the North America's first SUV to offer Active Park Assist, which uses an ultrasonic-based sensing system and Electric Power Assisted Steering (EPAS) to position the vehicle for parallel parking, calculate the optimal steering angle and quickly steer the vehicle into a parking spot.

The new technologies build on Ford Escape's unsurpassed crash ratings - a "Top Safety Pick" award from the Insurance Institute for Highway Safety (IIHS) and 5-star government ratings in all crash tests. The Ford Escape, which Kelley Blue Book editors recently named one of the "2009 Best New Family Vehicles," also is the only compact SUV to offer standard AdvanceTrac® with RSC® (Roll Stability Control) and a standard Safety Canopy® side curtain air-bag system. 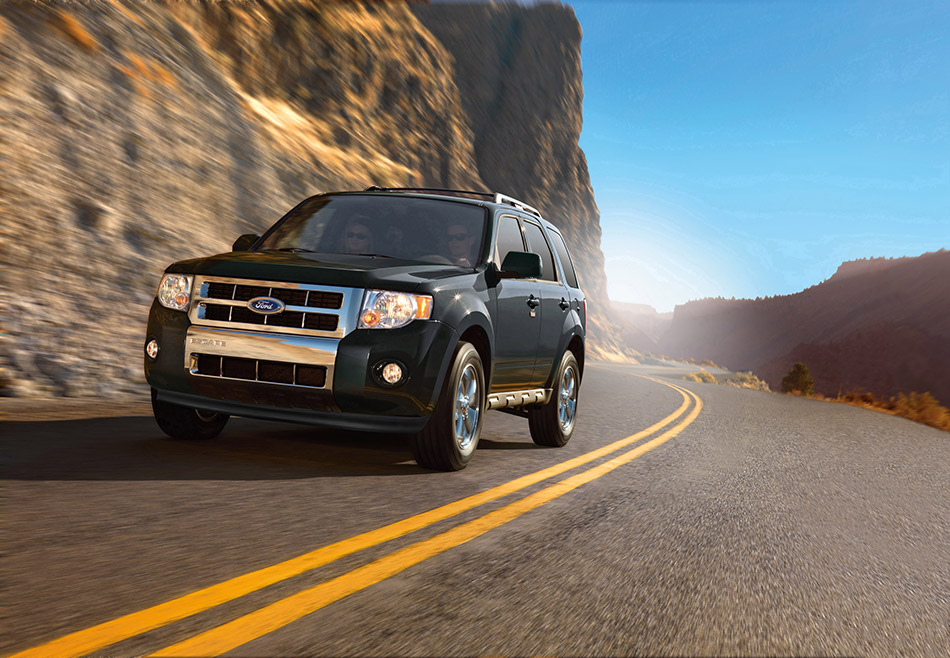 "The Ford Escape is one of few vehicles that earned both full 5-star crash ratings and a 'Top Safety Pick' in the small SUV segment," said Susan Cischke, Ford's group vice president of Sustainability, Environment and Safety Engineering. "These new technologies will help to take the new Ford Escape to the next level of safety and driver satisfaction."

According to 2008 Ford market research data, nearly nine out of 10 Escape and Escape Hybrid buyers rank safety features - including the road-holding capability delivered by roll stability control - as one of their top purchase reasons.

"Our vision with SYNC, MyKey and other new technologies is to be a technology leader, making it affordable for millions - just as Ford has done with safety and fuel-saving technologies," said Doug VanDagens, director of Ford's Connected Services Organization.. "We are a car company that through market-driven, customer-focused innovation is learning to think and act like an electronics company, leveraging partnerships with fresh technology leaders."

Integrated Spotter Mirror (standard) - a consumer-friendly, affordable blind spot technology that consists of an outside rearview mirror designed with a secondary convex spotter in the top outer corner, which is aimed exclusively at the driver's blind spot. When traffic enters the driver's blind spot on either side of the vehicle, it is visible in the secondary convex mirror, helping provide the driver broader peripheral view.

MyKey (standard) - allows owners to program a key that can limit the vehicle's top speed and audio volume. MyKey also encourages safety-belt usage, provides earlier low-fuel warnings and can be programmed to sound chimes at 45, 55 and 65 miles per hour. This feature is standard on Ford Escape models featuring a message center cluster, including XLT and above.

Rear View Camera System - uses an exterior camera embedded in the rear of the vehicle that sends images to a video display in the rearview mirror or the navigation system screen to help enhance visibility directly behind the vehicle when it is in reverse. Ford is leveraging the affordability of high-quality video cameras to widely offer the technology with navigation systems.

Active Park Assist - uses an ultrasonic-based sensing system and Electric Power Assisted Steering (EPAS) to position the vehicle for parallel parking, calculate the optimal steering angle and quickly steer the vehicle into a parking spot. The technology is a major leap forward in speed and ease of use compared with the camera-reliant systems offered by competitors. Ford's system requires less driver interaction and reduces the risk of selecting a parking spot that is too tight. Ford's Active Park Assist also works in downhill parking situations, unlike competing systems.

A recent study shows that SYNC's hands-free system significantly reduces the level of distraction when drivers select a phone number or choose a song on their MP3 player compared with the same operations performed with hand-held cell phones and music players.

"We know people want to stay connected in their vehicles, so Ford is continuing to deliver that connectivity for them responsibly and safely," says Susan Cischke, Ford's group vice president of Sustainability, Environment and Safety Engineering. "Our SYNC research backs up what most of us instinctively know - that it is better while driving to place a call using a voice interface than dialing manually, because you can keep your hands on the wheel and eyes on the road."