The 2010 Ford F-150 Harley-Davidson delivers a new standard of "custom cool," combining the smooth handling and legendary durability of America's best-selling truck with the authentic styling of Harley-Davidson, the industry leader in motorcycles.

This marks the 14th Harley-Davidson edition of an F-Series truck and latest in a line of Ford Harley-Davidson F-Series models dating back to 2000, which aim to appeal to customers who appreciate quality and unique details only this kind of collaboration can bring.

"Our successful co-branding, unmatched in the industry, offers customers true specialized truck luxury," said Derrick Kuzak, Ford's group vice president of Global Product Development. "Just like with our other associations, we've linked with an industry leader to offer the best of the best." 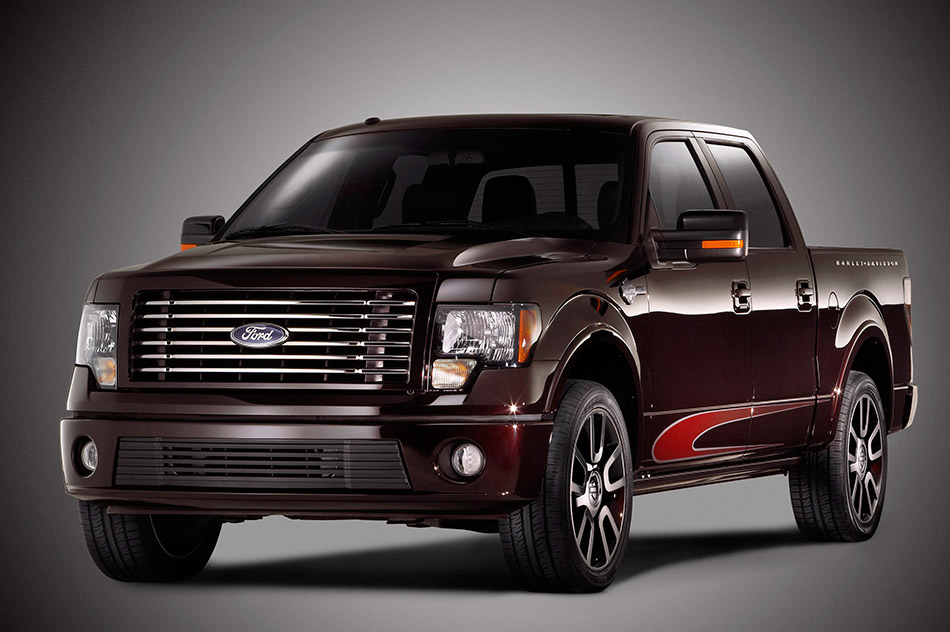 "This truck builds on the legacy of toughness that's been the hallmark of the Ford F-Series brand," said Matt O'Leary, chief engineer. "Now we're giving customers more of everything they love with the best F-150 and the boldest Harley-Davidson F-150 ever - featuring a fully differentiated design, all-wheel-drive capability, 22-inch wheels and a knock-out interior."

The exterior of the 2010 Ford Harley-Davidson F-150 offers a bold front fascia and six-bar shaped billet style grille and boasts specialized forged aluminum and Harley-Davidson® chrome badging. The truck will have a lowered appearance because of a fully integrated deployable running board.

Also standard are 22-inch low-profile performance tires - the largest in the F-Series lineup - and Euroflange forged wheels with a polished and painted center wheel cap. The paint selection is classic Harley-Davidson - Tuxedo Black and the first Ford application of Lava, a deep maroon with three-color metal flake.

The interior is customized to appeal to the truck buyer who appreciates the attention to detail for which both Ford and Harley-Davidson are renowned.

"There's a real tie-in between the truck's interior and exterior designs," said Patrick Schiavone, Design director. "It's very much like how some customized Harley-Davidson motorcycles have a prominent theme that runs through them. That's how we tie it in with custom bikes."

Also impressive are the seats and console lid, which features hand-made cloisonné badges; the console has a limited-edition serialization plate.

Linkage is apparent even in the smallest details, such as adornments on the seats.

"The theme of the seat was designed to resemble a Harley® biker jacket," Schiavone said. "We even used authentic materials you'd find on Harley-Davidson MotorClothes® brand apparel."

It is important to the Ford Design team that the truck remain genuine to enthusiasts of Harley-Davidson, customers who traditionally are as loyal to their motorcycles as F-150 owners are to their trucks.

That's why the team meets regularly with Harley-Davidson designers and travels to motorcycle events throughout the year - including Daytona Bike Week, Sturgis Motorcycle Rally and Harley-Davidson dealer meetings - to talk to current and potential customers. The team wants to be sure that when Harley-Davidson owners or enthusiasts need a truck, this is the truck they choose.

"We talk to everyone we can; we find out what the customer values," O'Leary said. "We look at what they like, what they want, and what they wish they had, and we go from there."

"No one understands their customers better than Harley-Davidson and Ford," said Joanne Bischmann, vice president - Licensing, Harley-Davidson Motor Company. "We're proud to share the spirit of Harley-Davidson authenticity in a unique interpretation of America's favorite truck, the F-Series."