The 2010 Ford Fusion is set to shake up the cut-throat mid-size sedan segment when it goes on sale early next year, bringing an all-new hybrid that will deliver the best fuel economy of any sedan in America, unsurpassed 4-cylinder gasoline fuel economy, more power, class-exclusive technologies including a blind spot detection and warning system and Ford SYNC, more total passenger and luggage capacity than the Toyota Camry, plus proven quality and reliability that has been recognized by the top consumer groups and magazines.

"With the new Ford Fusion, we are offering consumers more choice, even better fuel economy and the leading quality and reliability that they have come to expect," said Derrick Kuzak, Ford's group vice president of Global Product Development. "But that isn't all - we weren't satisfied with just matching the competition in the segment, we wanted to give consumers even more by delivering engaging driving dynamics and technologies that make the in-car experience more comfortable and connected."

Designed to stand out

Ford's attention to detail with the freshened Ford Fusion begins with a new design that gives the car a look that is both sportier and more upscale as well as improved aerodynamics. The car's newly designed front end, including a powerfully domed hood, and new headlamps, grille and larger fog-lamp area further enhance the sporty nature of the 2010 Ford Fusion. Aerodynamic enhancements and new underbody shields further boost Fusion's fuel economy. 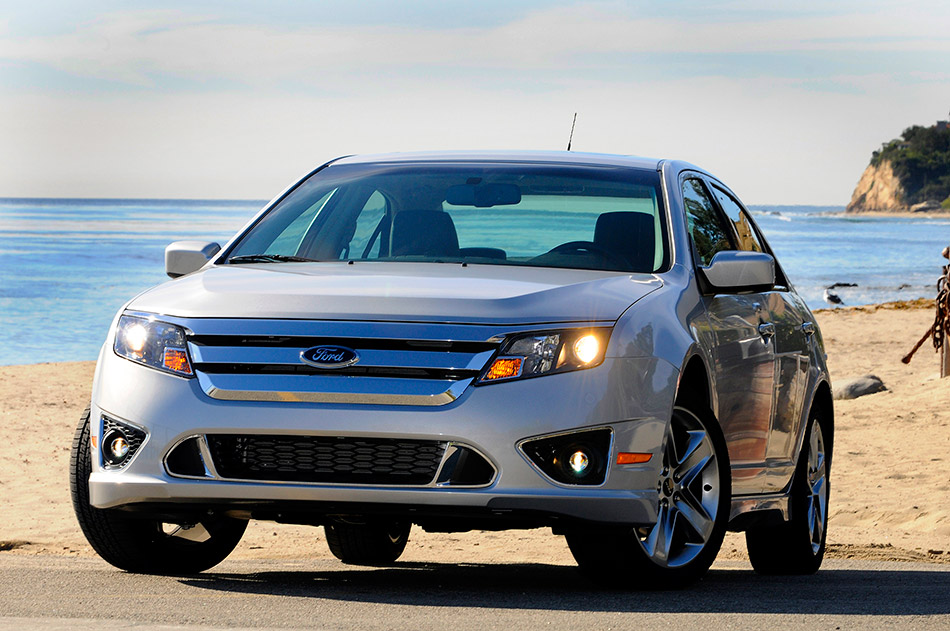 With all models, the interior design team created a more contemporary, technical look with metallic new finishes on the instrument panel that carry through on the center console, doors and steering wheel. The all new instrument panel is finished with a soft upper and lower skin and has much less hard plastic than Japanese competitors. The instrument panel displays and switches have also been updated with a contemporary iced blue lighting. A redesigned leather wrapped steering wheel with form fitting palm swells, a new shifter, and wrapped and padded armrests increase the Fusion's sportiness and comfort at all key driver touch points.

The seats received a makeover, as well. The seat contour has been revised, with more side support and overall a more comfortable seat with smoother bolsters and more-textural inserts. The seats also feature contrasting stitching and leather inserts to give the Ford Fusion even more attitude, befitting this mid-size sedan.

The gauge cluster has been designed with day time backlighting, a black lens, and 3-D elements to create a high tech jewel-like appearance, similar to a fine watch. Drivers will be greeted by a new "welcome" sequence that makes the Ford Fusion seem as if it's coming to life. Gauge needles sweep back and forth as the lighting and new chimes come on. The ambient lighting system offers the option of illuminating the front and rear footwells and front cup holders.

Both the inline four-cylinder and V-6 engines are upgraded for both improved fuel economy and power. The standard Ford Fusion S model equipped with Ford's new 2.5-liter I-4 engine is expected to deliver at least a 6 mpg improvement versus the 2009 model on the highway, resulting in fuel economy that is at least 3 mpg better than the Honda Accord and 2 mpg better than the Toyota Camry.

The 2.5-liter I-4 engine horsepower and torque also have been improved from the car's outgoing 2.3-liter 4-cylinger engine, jumping to 175 hp and 172 ft.-lbs. of torque from the previous 160 hp and 156 ft-lbs. As a result, 0-60 performance improves by more than a second, now topping Camry and Accord.

The additional gear on the I-4 provides better drivability and performance as well as fuel savings, said Matt Hettenhouse, Powertrain Team Leader for the Ford Fusion. "The gear ratios and the overall span of the transmissions allow us to have a more-efficient and higher performing shift schedule," he said.

The first gear can be made a little deeper, which provides smoother acceleration. At the top end, a higher gear allows the engine to run slower in highway conditions, which also aids fuel economy.

Front-wheel drive and on-demand all-wheel drive are available with models with a 3.0-liter engine and with the new Ford Fusion Sport 3.5-liter engine. Both V6 engines are also available with SelectShift for individual gear control. The versatility in the powertrain systems creates a wide range of options for customers designed to fit every need.

The 2010 Ford Fusion now comes equipped with Electric Power Assist Steering (EPAS) system on 2.5- and 3.0-liter models, improving the driving dynamics of the vehicle while delivering greater fuel savings because the steering system is operated by the electrical system rather than the engine. Additionally, EPAS provides customers with improved steering feel and reduced low-speed efforts that when coupled with a nearly 1 foot smaller turning circle for 2010 makes parking a cinch.

Fusion's front stay bar and rear suspension link geometry have been revised to improve steering, handling, and ride. The suspension springs, shocks, and sta-bars have also been retuned to take full advantage of the revised geometry and new steering system.

In addition to improvements in the 2010 Fusion's steering, handling and improved brake pedal feel, the Ford Fusion team also took a look at how to improve the comfort of the car, including reducing wind noise and road noise.

Improved body and door sealing also contribute to Fusion's best-in-class standing in wind noise. Overall, the reduction in wind noise and road noise puts Ford Fusion near some of the best luxury cars in terms of quietness and speech intelligibility. Wind noise, for example, is 3 sones better than Camry and Accord. Models with the I-4 engine are class leaders in wind noise.

For the 2010 model year, the Ford Fusion adds an all-new hybrid model. The Fusion and Mercury Milan Hybrid join the Ford Escape and Mercury Mariner Hybrids, doubling both the size and volume of Ford's hybrid lineup.

"With the new Ford Fusion and Mercury Milan hybrids, we are now able to offer even better range of travel on battery power at a greater speed, thanks to a more efficient, seamless transition between the battery-powered motor and gasoline-driven engine," he said. "These new hybrids will exceed expectations on all fronts - fuel efficiency, comfort, convenience and drivability."

The Ford Hybrid team has developed a powertrain system that combines the best attributes of the gasoline engine and electric battery-driven motors to deliver the optimal experience for the customer in terms of driving performance and fuel economy. Additionally, the propulsion system for the Ford Fusion and Mercury Milan hybrids transitions between gas and electric power and back more efficiently and seamlessly.

The overall system upgrade allows the Ford Fusion and Mercury Milan hybrids to operate longer at higher speeds in electric mode. The hybrid vehicles can operate up to 47 mph in pure electric mode, approximately twice as fast as some competitors. Plus, the city driving range on a single tank of gas is expected to be more than 700 miles.

"Because our hybrid can run at a much higher speed in electric mode, you can do so much more in city-driving situations," said Gil Portalatin, Hybrid Applications Manager. "Under the right conditions, you can drive in your neighborhood or mall parking lots without using a drop of gasoline."

The Ford Fusion Hybrid also offers drivers a way to be more connected to the hybrid driving experience thanks to Ford's SmartGauge with EcoGuide, a unique instrument cluster execution that helps coach them on how to optimize performance of their hybrid.

SmartGauge with EcoGuide features two, high-resolution, full-color liquid crystal display (LCD) screens on either side of the analog speedometer that can be configured to show different levels of information, including fuel and battery power levels, average and instant miles-per-gallon.

EcoGuide uses a multi-layered approach to coach the driver to maximum fuel efficiency.

A tutorial mode built into the display that helps the driver learn about the instrument cluster and the hybrid in a whimsical way that does not overpower. Technical enthusiasts will love the detailed gauges that will help them learn to become more efficient in their driving. Everyday drivers will love another new feature in this same gauge cluster. Called "Efficiency Leaves," the system "grows" leaves and vines on-screen to reward customers for efficient driving.

Drivers can choose one of four data screens to choose the information level displayed during their drives. They are:

Several other elements help differentiate the Ford Fusion Hybrid from its gas-powered sibling, including unique hybrid "road and leaf" badging on both sides and the rear of the vehicle; unique 17-inch, eight-spoke wheels; eco-friendly seat fabric made from post-industrial 100 percent recycled materials; and a standard 110-volt power outlet.

The base 2010 Ford Fusion already is a fun-to-drive mid-size car. With an even sportier look, a bigger, more-powerful engine, special 18 inch wheels and upgraded suspension tuning to go along with a distinctive interior, the new 2010 Ford Fusion Sport is a dynamic, welcome addition.

"We're maintaining the fun-to-drive elements that made the Ford Fusion such a huge success and building on those," said Chief Engineer J.D. Shanahan. "Our 2010 models are even more fun to drive with better steering and handling. It's all exemplified by the Ford Fusion Sport with its 3.5-liter engine, 18-inch wheels and sport tuning."

The interior reflects its sporty nature as well. As with the base models, the Fusion Sport's instrument panel and center console deliver a more-technical, content-driven look. Ford Fusion Sport includes a Charcoal Black interior with a high tech soft touch dark gray finish available. Sport Blue or Sport Red interior accents are also available, depending on exterior color selected. These give the instrument panel and console a sportier look as well, which carries over to the seat inserts and contrast stitching.