The new 2010 Ford Mustang Shelby GT500 delivers the most power and refinement ever for a Ford SVT-tuned performance Mustang - and a few surprises, too.

"We're proud of the many enhancements that were developed jointly by the Ford and Shelby Automobiles team last year that we've now incorporated into the new 2010 Shelby GT500," said Carroll Shelby, founder of Shelby Automobiles. "Building on what we learned to create the Shelby GT500KR, this new car offers a great combination of power, handling and braking. It is truly a special car that is a great deal of fun to drive."

Ford's Special Vehicle Team used the gains made on the 40th anniversary edition Shelby GT500KR "King of the Road" Mustangs as the performance starting point and built from there. The design team, with a nod to the original Shelby Cobras from the 1960s, takes those design cues even further with nuanced improvements in both the coupe and convertible, each of which boasts a more-refined interior. 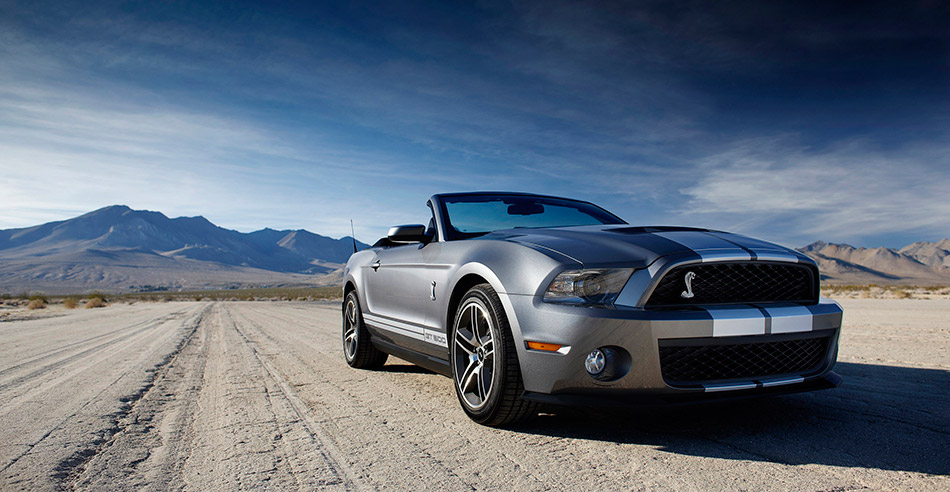 "Working together on the KR, the Ford and Shelby teams developed new systems to continually improve the iconic Mustang," stated Amy Boylan, president of Shelby Automobiles. "Those lessons learned are incorporated into the 2010 Ford Mustang Shelby GT500. This approach will help maintain Mustang's leadership position at the front of the pack and make the ownership experience even more enjoyable."

"The muscle car segment is becoming even more competitive," said Jamal Hameedi, chief nameplate engineer for SVT. "We need to uphold the Mustang badge with honor, the Shelby badge with honor and most importantly the Ford badge with honor. The 2010 GT500 is the car that will do all of that."

The combination of added horsepower, refinement and functionality makes the 2010 Ford Mustang Shelby GT500 a unique high-performance car. The 2010 Shelby GT500 delivers more horsepower and more torque than the outgoing model, thanks in part to advancements pioneered on the GT500KR.

The 2010 Ford Mustang Shelby GT500 is powered by a supercharged and intercooled 5.4-liter dual overhead cam V-8 engine expected to produce 540 horsepower and 510 foot-pounds of torque. The redline is 6,250 rpm. The car's aluminum power dome hood not only adds to the Shelby's appearance, it helps cool the engine through a hood extractor.

The Shelby's open-element air induction system features a conical air filter instead of a flat-panel closed system to reduce air restriction. This approach allows more air to be pumped through the engine, producing more power and increasing the engine's efficiency.

A cold-air intake feeds the coolest air possible directly into the air box, helping further increase horsepower. The intake necessitated moving the Cobra snake badge to the other side of the grille to enable maximum airflow.

The twin-disc clutch on the six-speed manual transmission has been significantly upgraded, improving drivability and NVH. The discs on the 2010 Ford Mustang Shelby GT500 are larger - 250 mm in diameter compared with 215 mm in diameter on the outgoing model - and made of copper and fiberglass to make them more robust.

A unique component of the twin-disc system is the control of the intermediate disc. Rather than floating, it instead has six straps that control the engagement of the clutch, improving drivability.

The 2010 Ford Mustang Shelby GT500 offers customers improved straight-line acceleration, plus fuel savings when cruising on the highway in the top gears. Gears 1-4 remain the same, but fifth gear changes from .80 to .74 while sixth gear goes from .63 to .50, meaning that the 2010 Ford Mustang Shelby GT500 will turn lower engine RPMs in those gears and deliver improved fuel efficiency. The new final drive ratio, from 3.31 to 3.55, enables the improved acceleration in lower gears while complementing the revised fifth and sixth gear ratios.

The Shelby's distinct sounds will be apparent as always, though with new refinements, thanks to the work of the Noise, Vibration and Harshness (NVH) team. A patented resonator placed between the air filter and engine throttle body helps keep unwanted noise in check.

"You still hear the supercharger but not so that it's intrusive," said Kerry Baldori, chief functional engineer for SVT. "It's the same with the exhaust. You want people to know you're driving something special, but you don't want an exhaust note that overpowers the whole interior.

"We spent a lot of time getting the right sound quality out of the exhaust so you get that nice, crisp Shelby sound outside and a pleasant sound inside the cabin. It's a nice balance; one isn't overpowering the other."

Driving dynamics also are improved, thanks to SVT's signature chassis tuning as well as new 19-inch Goodyear F1 Supercar tires and forged aluminum wheels on the 2010 Ford Mustang Shelby GT500 coupe and 18s on the convertible.

Spring and dampers have been optimized for better roll control, giving customers more confidence when braking, accelerating or turning. The new chassis tuning takes its philosophy from the KR program, with a greater emphasis placed on primary body control.

"All our changes were about making the car to respond as fast and as predictable as possible," Hameedi said. "The 2010 Ford Mustang Shelby GT500 conveys an athletic, confident feel. The shifter, clutch pedal, brake-pedal efforts and overall steering efforts are easier now. We wanted to make sure we had a nice, crisp short-throw shifter that was easy to go from gear to gear."

The Goodyear F1 Supercar 19-inch tires have been upgraded, too. SVT members developed a "recipe" for the attributes and characteristics they wanted in the tire, which Goodyear's team of engineers, designers and manufacturers brought to life. The result is better grip, better handling and better NVH properties, leading to a better customer experience.

The wheels themselves complement the high-performance nature of the 2010 Shelby GT500. The 19-inch wheels are forged aluminum wheels milled on both sides. The extra machining process creates "blade" spokes with very thin, yet strong, cross-sections. The spokes have a specific curve from the rim to the hub, not only for strength, but also to accentuate the offset and width of the tires.

The 2010 Ford Mustang Shelby GT500 features AdvanceTrac, Ford's stability control system with several options for performance. The default "on" mode accommodates every-day driving, and a Sport mode delivers for those wanting to put the Ford Mustang Shelby GT500 through its paces on the track. The system also can be turned completely off, although the anti-lock brake system and other active safety systems remain in place. Standard safety equipment includes: dual stage front air bags, side-impact air bags and Ford's Personal Safety System.

Numerous aerodynamic upgrades, including a redesigned splitter, were made to the front end of the 2010 Shelby GT500.

"We worked hard to get as much downforce with as little drag as possible," Baldori said. "We worked to seal off the air that comes in the front so it can't go underneath the car. We spent a lot time sealing components such as the radiator and intercoolor to get rid of all the leak paths.

"The result of this evolution of aerodynamics is we've increased downforce, reduced drag and improved the overall efficiency of the 2010 Ford Mustang Shelby GT500."

Directing the air so it's used most efficiently was a painstaking process that ultimately will be rewarding to customers. The design of the front fascia and the car's "flush" hood helps focus air flow. The top grille focuses air into the radiator, with a rubber flap inside the engine compartment helping to seal the system. The lower grille helps cool the intercooler. SVT engineers also went as far to block off specific diamonds in the front of the 2010 Shelby GT500's distinctive grille to help maintain the correct cooling and aerodynamic balance.

A meaner, reskinned snake ready to take to the streets

The 2010 Ford Mustang Shelby GT500 is the most-robust design and most-distinctive model of the new 2010 Ford Mustang lineup. "The design we chose was a 'flush' hood where the fascia defines the entire front of the vehicle," Hameedi said. "That's very hard to execute from an engineering standpoint, but it really sets the Shelby off as very, very different from the base Mustang."

"This epitomizes the ultimate Mustang," added George Saridakis, Exterior Design manager of the Mustang and Shelby GT500. "It's all about power and expressing power."

Saridakis said his team took a cue from the Shelby AC Cobra 427 with respect to the front grilles, which are gaping and appear ready to swallow the road. Another obvious difference for the Shelby is the addition of racing stripes, which also will now be available on the convertible. "Racing stripes made their mark on 1960s-era Ford performance vehicles," Hameedi notes. "That's something we feel is a key part of the Shelby performance DNA - maybe more so than some of our competition."

Rounding out the Shelby's exterior modifications are the unique signature coiled Cobra badges on the front grille and front fenders, a more aggressive front splitter and lower-drag rear spoiler, which added to improved aerodynamic features, round out the exterior modifications. "We wanted the spoiler raked back aggressively to minimize drag, but we also have an integrated Gurney Flap that provides the downforce," Saridakis said.

What's inside counts with the 2010 Ford Mustang Shelby GT500

The base 2010 Mustang received a powerful new interior design. For the GT500, the interior design team members challenged themselves to raise the bar even higher to create the ultimate Shelby Mustang interior.

Using genuine materials such as real leather in all seats, real aluminum on the instrument panel and Alcantara inserts on the seats and steering wheel gave the appearance a precisely crafted, jewel-like yet functional feel. "You'll definitely know you're in a Shelby," said Douglas Gaffka, Chief Designer, Shelby GT500.

The genuine aluminum finish panels have a unique-to-GT500 three-dimensional dimpled texture pattern inspired by racing clutch plates, braided hoses and cross-drilled racing brake rotors. The pattern has been painstakingly tuned to compensate for the compound curvature of the instrument panels. In addition, the "GT500" logo has been discretely engraved into the aluminum in front of the passenger as a nod to classic Shelby Mustangs of the 1960s.

All 2010 Mustangs and Shelbys feature bright 360-degree rings surrounding the gauge cluster, uninterrupted by the steering column. These rings will come in chrome for the Mustang and a Satin Liquid Chrome finish for the GT500. This finish is featured throughout the interior. An intricate cobra is etched into the center of the aluminum steering wheel badge. The Shelby Cobra appears at startup on the navigation screen, and the familiar red "SVT" logo utilizes new ambient lighting to illuminate the door scuffplate.

"When customers drive this car, they're not only going to be impressed by the performance and the Shelby heritage, but they're going to see all these carefully designed details and know they've bought a well-crafted car," Saridakis said.

Even the classic white shift knob - an icon of Shelby Mustang DNA from years past - received special attention. First, it had to be the traditional white. It also had to be specific to the Shelby. The answer was to combine the racing-stripes theme with the traditional "H" pattern found on shifters to create a one-of-a-kind knob. Like the exterior, the racing stripes wrap from end to end, encircling the knob.

This combination of outstanding performance coupled with a fresh, exciting, well-crafted interior intensely focused on improving the entire experience will make the 2010 Ford Mustang Shelby GT500 even more sought after, and a fitting addition to a long and proud history.