February 28, 2006, will mark the world premiere at the Geneva Motor Show of the Rinspeed concept car, "zaZen", created by the famous Swiss designer, Frank M. Rinderknecht. It represents his vision of the car of the future and will be showcased as a kind of "automotive enlightenment" on four wheels. The vehicle was produced in cooperation with Bayer MaterialScience, one of the world's largest plastics producers. It also embraces a technical revolution in car manufacture, with the transparent backlite being turned into a luminous holographic area. As if from nowhere, the third brake light shines out of what looks like a floating transparent hardtop.

The world premiere of the "zaZen", with its holographic brake lamp and smoothly contoured, transparent, one-piece roof dome made of high-tech Makrolon®, marks the beginning of a new era in lighting technology in vehicle design. For Ian Paterson, who is responsible for innovation on the Board of Bayer MaterialScience, this novel lighting system represents a small step on the way to building the car of tomorrow: "Together with Rinspeed, our goal is to get people thinking about the car of the future. We contribute our high-quality materials and the combined creative know-how of our engineers." 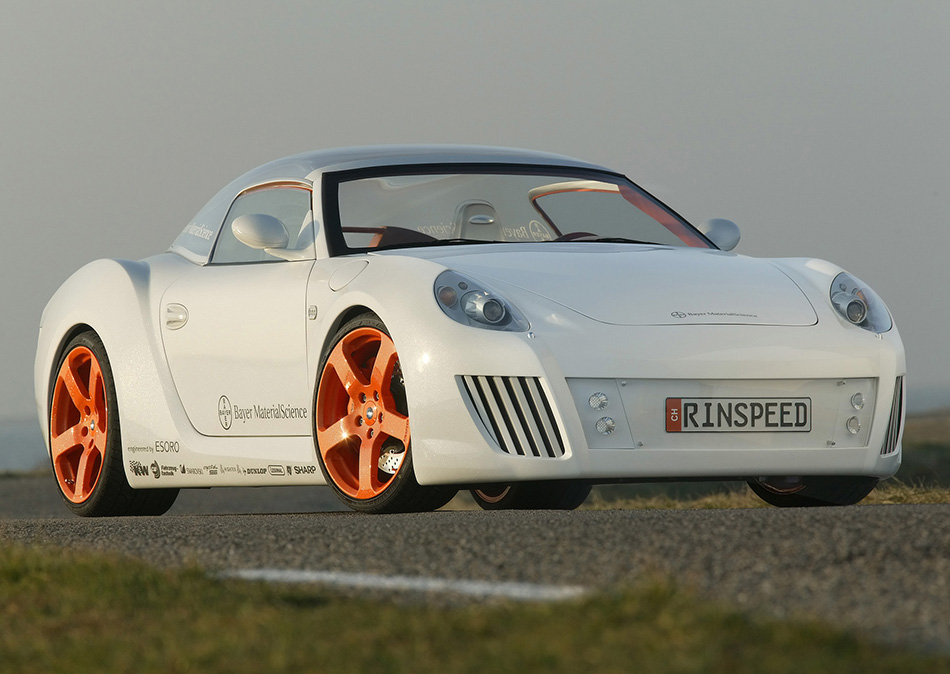 The name of the new concept car – "zaZen" – has been carefully chosen by Rinderknecht: "After all, Zen – borrowed from Buddhist teaching – is a special form of perception: You only get there if you are prepared to give up preconceived ideas." Both partners went out of their way to emphasize that a concept car presented at a motor show can only be a snapshot taken from an unceasing development process. For example, the work on the switch-on/off transparency for three-dimensional forms is always ongoing.

The breathtakingly designed vehicle concept was born at the Swiss engineering specialists, Esoro, from one single vision and many imaginative ideas. The entire roof dome down to the belt line is made of Bayer's transparent Makrolon® polycarbonate. A glass-clear elastic sealant from Revoflex AG has been used to achieve an optimum joint with the body. The striking hardtop is light in both senses of the word. Not only does it appear to float airily above the rather chunky body, it is also weighs many kilograms less than glass – not that it would be possible to make it from glass in the first place.

The lightness of the roof construction ties in with the surface coating of the "zaZen" – a white mineral shade based on the Bayer raw materials, Desmodur® and Desmophen®. It is certainly not gaudy, but unassumingly beautiful through the millions of tiny precious Swarovski crystals protected by a self-healing polyurethane clear coat. This so-called "crystal skin" finish was developed and applied by the Austrian surface coating specialists, Karl Seelos. The Lesonal company was responsible for producing a perfect substrate. In a nutshell, the future driver can expect to find a muscular body in a sophisticated, tailored suit – a suit that has been given an exclusive touch though Swarovski trimmings on the front, side and rear lamps and the wheel rims. But the crystal manufacturer came up with a real masterpiece in the design of the seemingly never-ending 3D rear decorative panel.

The interior fittings of the "zaZen" are also dominated by this ethos of transparency and reduction to essentials, cleverly combined with strategically placed highlights. The transparent plastic seat shells of Makrolon® fitted with Technogel® upholstery were produced in cooperation with Recaro. A bright, friendly mango-orange color has been chosen for the rest of the leather/fabric interior trim. It was made by hand by Strдhle & Hess, SC Schдfer, OesterleSLR and Sellner. Together with the Luoro Faia plantation wood – also in the dashboard area - it creates an interior that radiates warmth and relaxation.

The "zaZen", which weighs 1,495 kg, is powered by a 355 bhp 6-cylinder boxer engine from the Porsche 997 Carrera S. It has a top speed of 293 kph and accelerates from 0 to 100 kph in exactly 4.8 sec. Should the "zaZen" be built in a small series at some time in the future, Rinspeed will consider – in line with its tradition – offering it with an environmentally friendly natural gas propulsion system.

At 6,600 rpm, the engine has a maximum torque of 400 Nm, which is transmitted to the rear axle via a manual six-speed transmission. The necessary traction is provided by Dunlop tires with Touch Technology (245/30-20 at the front and 305/25-20 at the rear), mounted on lightweight Rinspeed five-spoke rims (8.5 x 20" at the front and 11 x 20" at the rear) made by CW Fahrzeugtechnik (Borbet Group).

The body – for which the molds were produced using Obomodulan® modeling foam – sits on a 4x adjustable chassis specially designed by KW automotive. Here, the designers have managed to perform the rare feat of creating an outstanding synthesis of drive comfort and sporty handling.

Another small work of art connected with the "zaZen" is currently taking shape in Berlin at the eyewear designers, "ic! berlin". The company's owner, Ralph Anderl, who also acted as the model during the photo shoot, was so taken by the new Rinspeed concept car that he designed an eyewear collection specifically to go with the car. Now you can not only drive the "zaZen", you can also wear it.