The 2011 Ford Mustang V6 puts 305 high-performance horses in the hands of V6 coupe buyers with a new all-aluminum double-overhead-camshaft (DOHC) engine that delivers 31 mpg on the highway with a six-speed automatic transmission.

The all-new six-speed automatic is joined by a six-speed manual transmission for the shift-it-yourself crowd, while handling and cornering is bolstered by the addition of Electric Power Assist Steering (EPAS) and a host of suspension improvements.

"This new V6 engine really speaks to what Mustang is all about," said Barb Samardzich, Ford vice president of Global Powertrain Engineering. "It produces power everywhere in the rev range and loves to be pushed hard. The Duratec 3.7-liter builds on our promise to use advanced technology to deliver both power and fuel economy." 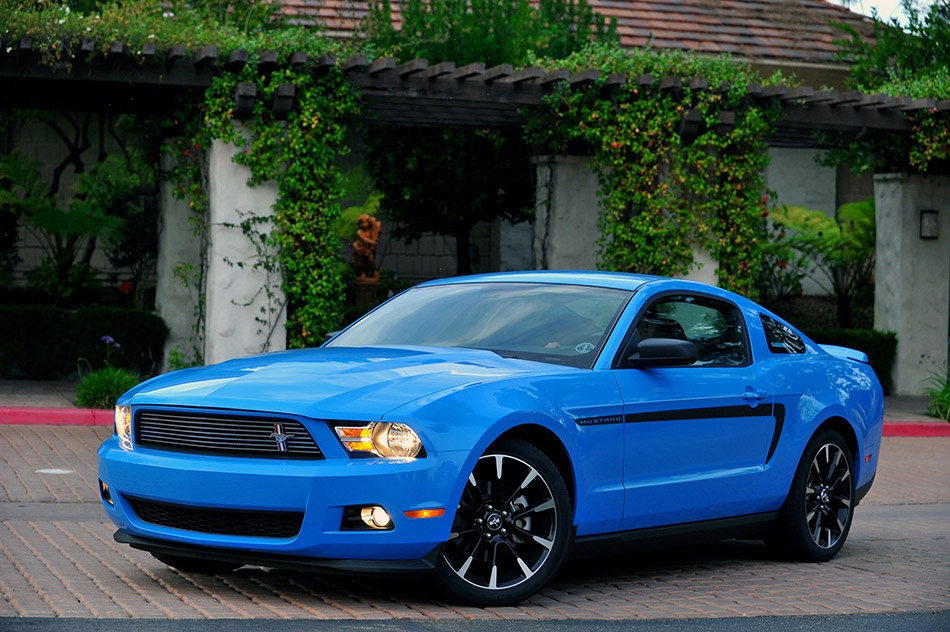 The high output is due largely to Ti-VCT, which allows variable control of valve operation across the rev range. The variable cams operate on a Direct Acting Mechanical Bucket (DAMB) valvetrain using polished buckets to reduce friction. The end result is as much as a 3 percent improvement in fuel economy and a 10 percent improvement in power output versus traditional engines without these advanced features.

Ti-VCT is complemented by specially tuned composite upper and lower intake manifolds for efficient air delivery and lighter weight. Ignition power is delivered by a high-energy coil-on-plug design, while piston-cooling jets and a lightweight die-cast aluminum cylinder block improve the durability and efficiency of the 3.7-liter V6 design.

Engineers also worked to ensure aggressive, high-performance sounds come from the new engine, from intake to exhaust. Not only does the retuned air intake system minimize losses, it also provides the driver with a satisfying intake rush on hard acceleration. The all-new dual exhaust system is mellow at idle but opens up with a howl at full-tilt, letting Mustang drivers know they're behind the wheel of a world-class sports coupe.

Drivers can get the most out of the new V6 engine's output using either an all-new six-speed manual gearbox or a six-speed automatic transmission. Both come with the flexibility and fuel economy benefits of six forward ratios regardless of whether buyers want to shift for themselves or not.

Drivers who prefer a manual gearbox will enjoy the short throws and direct feel of the shifter along with the relaxed cruising permitted by the extra top gear ratio. Customers choosing the automatic will be pleasantly surprised to find the advanced six-speed transmission does not sacrifice fuel economy - or performance - for convenience, delivering 31 mpg highway with crisp, quick shifts that maximize torque and horsepower.

The standard 2.73 rear axle provides an ideal blend of cruising fuel economy and acceleration, aided by the wide ratio spread permitted through the use of six forward speeds in the gearboxes. Performance enthusiasts can select an available 3.31 rear axle ratio for better off-the-line launch characteristics.

Extra horsepower and refined engine operation will be the most noticeable features to new 2011 Ford Mustang V6 3.7-liter buyers while projected class-leading fuel economy, also a standard feature, offers an additional bonus. The numbers speak for themselves:

While Mustang's aerodynamic improvements were designed mainly to improve fuel economy, engineers also adjusted the vehicle's front/rear lift balance. The result is a car that tracks more securely and feels more "planted" to the road surface at higher speeds, helping to keep the tires in better contact with the pavement.

The addition of EPAS marks a new era in driving dynamics for Mustang owners. Steering effort at parking lot speeds is reduced, while high-speed and highway feel is improved for more precise steering and handling. Because the belt-driven power steering pump is eliminated, EPAS provides a quieter vehicle with fewer components drawing engine power.

EPAS also enables new technologies that adjust for minor driving annoyances. Drift-Pull Compensation adjusts the steering to correct for crosswinds and minor road crowning, while Active Nibble Control helps eliminate the "shimmy" felt at high speeds when a wheel is out of balance or a brake rotor is warped. Both conditions are alleviated by EPAS independent of driver input, helping ensure Mustang delivers a smooth, comfortable driving experience in all conditions.

Ford Mustang buyers choosing the new V6 will also get a standard limited-slip differential that provides better handling and more sure-footed grip in poor weather conditions by directing engine torque to the rear wheel with the most traction. When the time comes to slow things down, the 2011 Mustang V6 is also equipped with larger four-wheel Anti-lock Braking System (ABS) disc brakes, with 12.4-inch front and 11.8-inch rear rotors.

To reinforce the sporty nature of the 2011 Mustang, all V6 models will come standard with new instrument cluster graphics, including a speedometer that reads up to 160 mph and a tachometer that reads to 8,000 rpm, reflecting the free-revving style of the new engine.

Occupants also benefit from new door seals and a rear wheel arch liner that reduce road noise for a quieter, more enjoyable drive, all with minimal weight gain compared to the 2010 model.

Enthusiasts who want a premium performance-oriented Ford Mustang V6 can opt for the new Performance Package, which will be available in August 2010.

For 2011, Mustang also ups the ante on technology and convenience features, including a standard driver's message center in the instrument cluster and integrated blind-spot mirrors in the side-view mirror housings.

Mustang's technological advances are also incorporated in the structure of the vehicle, where improvements in body stiffness contribute to the coupe and convertible's driving performance and have a parallel benefit in accident protection. A stiff vehicle structure like that found on Mustang helps protect the cabin from deformation and intrusion in an impact.

The front structure's crush zones are computer-designed to absorb energy in a controlled manner and help dissipate it before it can reach the passenger compartment. Ford engineers have run thousands of design iterations of the Mustang's front rails to arrive at an octagonal shape that helps spread crash forces evenly to aid in protecting occupants.

State-of-the-art technology adds to the convenience and safety of the 2011 Mustang, from the availability of the latest version of Ford SYNC®, with applications such as Traffic, Directions & Information, 911 Assist™ and Vehicle Health Report, to standard AdvanceTrac® Electronic Stability Control, which complements the all-speed traction control and standard ABS. 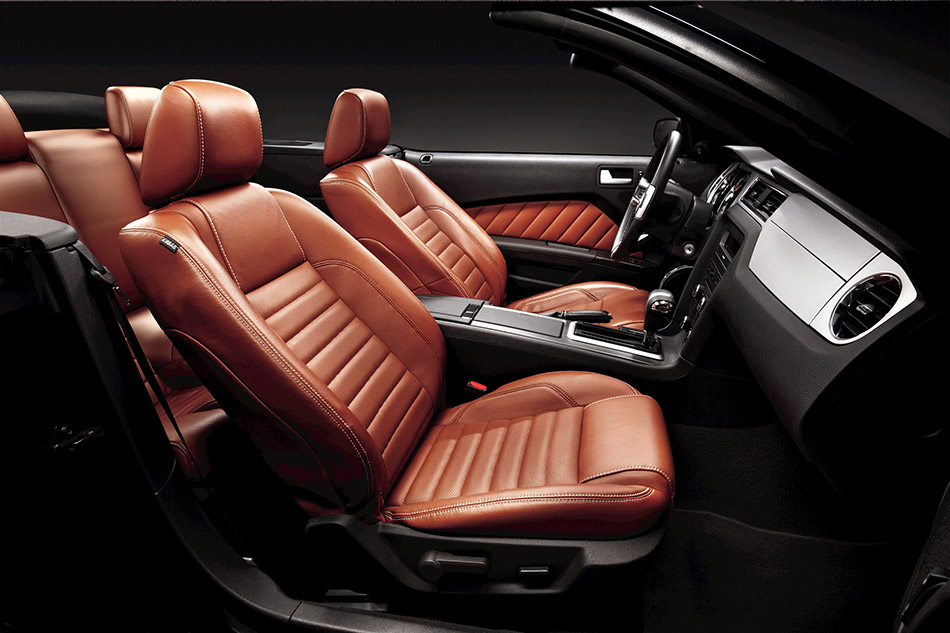 For 2011, Mustang exterior styling reflects the successful 2010 redesign, with new headlamps, lower fascias, fenders and grille capped by a powerdome hood that adds to the muscular appearance while functionally allowing for enhanced air cooling of the engine.

Mustang's washer-fluid nozzles are tucked into the cowl, while the antenna resides at the rear, both changes creating a cleaner appearance while also reducing wind noise.

The rear end design features aggressively angled corners, a sculptured decklid and prominent badge. A rearview camera incorporated into the spoiler is available on some models.

Mustang taillamps feature three LED bulbs firing sequentially from the inside for turn indication. The sequential bulbs were a distinct Mustang feature in the '60s, while the vertical reverse lamps evoke a modern version of the Ford classic three-lens taillamp.

Inside, the new speedometer and tachometer are housed in a one-piece instrument panel. The design is crafted in seamless soft-touch TPO (Thermoplastic Olefin) skin fully encompassing available genuine aluminum-finish panels.

Mustang's chrome-ringed gauges and dual-vane air register vents are precisely crafted and positioned, and the instrument panel and console flow as one shape - another strong connection to Mustang heritage.

The heart of every Mustang is its engine, and beneath the hood of the new 2011 models beats a technological tour de force. On both the 3.7-liter V6 and 5.0-liter V8 engines, Twin Independent Variable Camshaft Timing (Ti-VCT) allows Mustang drivers to balance high performance and fuel economy.

Ti-VCT provides extremely precise variable - yet independent - control of timing for intake and exhaust valves. Drivers of the 2011 Mustang will notice abundant torque and class-leading fuel economy. An additional benefit of Ti-VCT is a reduction of emissions, especially in situations when the throttle is partially open.

Independent adjustment of intake and exhaust valve timing allows maximum fuel economy at part-throttle, while delivering optimized power in full-throttle situations. An added benefit is improved drivability and responsiveness across the torque curve.

The flexibility allowed by Ti-VCT means Mustang customers will experience:

Traditionally, camshafts only have been able to open the valves at a fixed point defined during engine design and manufacturing. But with modern variable cam timing systems, the camshafts can be rotated slightly relative to their initial position, allowing the cam timing to be advanced or retarded. Ti-VCT takes this technology and applies it to both the intake and exhaust camshafts of the DOHC design.

Mustang 3.7-liter V6 models use electronic solenoid valves to direct high-pressure oil to control vanes in each of the camshaft sprocket housings. By using one oil control solenoid valve per camshaft, controlled by the Electronic Control Module, each intake and exhaust cam can be advanced or retarded independently of the other as engine operating conditions change, providing an exceptional degree of valve timing control.

"Ti-VCT technology will continue to proliferate across the Ford powertrain portfolio," said Samardzich. "By 2013, you can expect to see this advancement available on 90 percent of our nameplates."

Around the globe, Ford's performance-tuned cars are known to provide an uncompromised driving experience in a remarkably civilized package. Growing from that tradition, the new 2011 Ford Mustang V6 will offer an optional factory-installed Performance Package that combines high-tech horsepower and a taut suspension in a package that will appeal to track-day fans and sports car aficionados alike.

Powered by the same 305-horsepower all-aluminum Ti-VCT V6 as the new 2011 Mustang, the Performance Package takes advantage of the new engine's lightweight and high-revving nature to deliver a nimble performance car equally at home on a road course or a road trip.

"The new Performance Package delivers on fast, fun and affordable, combining the all-new 2011 V6 with Mustang GT prowess," said Dave Pericak, Mustang chief nameplate engineer. "It's a true sports car for the new generation and a smart choice for the environmentally-conscious enthusiast. It is a perfect marriage of power, performance and value."

Borrowing from the Mustang GT, the Performance Package includes numerous suspension, braking and body stiffening upgrades to deliver unparalleled handling performance. That road-holding is helped by a near-equal front/rear weight distribution, providing exceptional transient response along with the car's slimmed-down curb weight of less than 3,500 pounds.