If the thought of crisp mountain air, fresh powder and breathtaking vistas isn't enough to set your mind racing, the Volvo C30 Concept by Heico Sportiv and Burton Snowboards will. Customized, sport tuned and outfitted for active lifestyles, this one-of-a-kind show car embodies the snowboarding spirit of living life to the fullest.

This cool ride is aimed at driving enthusiasts who are just as passionate about their cars as they are about the great outdoors. Never willing to settle for the norm, their quest for adventure knows no bounds. Conquering the halfpipe, pushing the limits at board parks or heading for the backcountry is what it's all about. Since their clothing, choice of music and attitude defy convention, so too does this spin on Volvo's new sport compact. 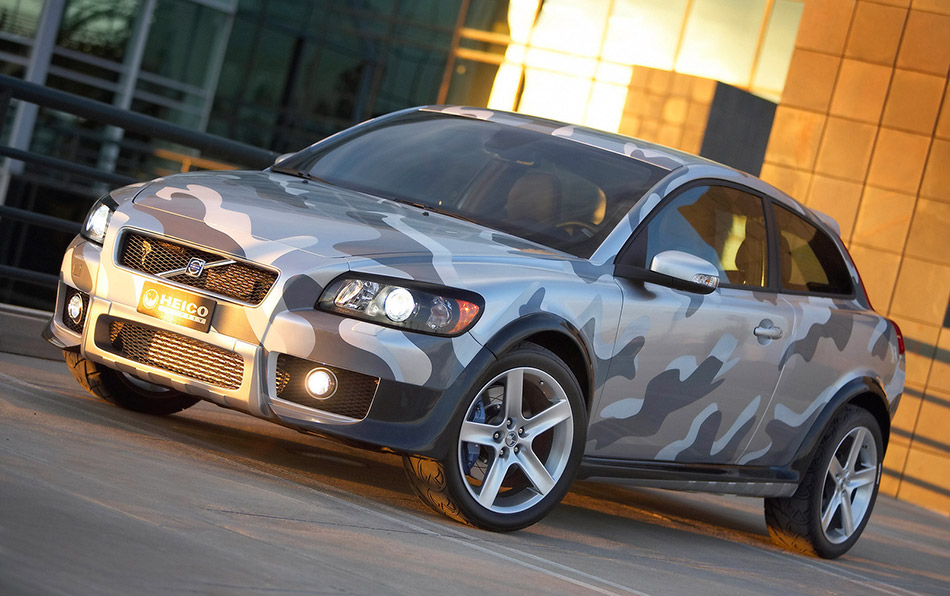 Heico, the premier Volvo tuner in Europe, partnered with Burton Snowboards, the world's leading snowboard company, for the C30 project. The cargo compartment is tricked out with an integrated snowboard storage system complete with boot, helmet and gear storage units. 2008 Burton Vapor snowboards, C60 bindings and SL-10 boots will also be showcased with the concept car. Custom blue LED lighting makes the gear glisten in the dark like so many snowflakes on a moonlit winter night.

At home on the switchbacks or the road to the slopes, the Heico/Burton C30 concept is part Paris-Dakar raider, part efficient weekend gear hauler and part stylish, sporty performer. It wears a Heico-Ice 7-stage pearl-effect paint scheme with a wicked "camo" theme. Heico's custom fabricated full body kit adds a unique front fascia with "cornering" fog lights, a sport grille, side skirts and fender flares plus a rear skirt with integrated diffuser panel.

With an estimated 300 horsepower at 5,500 rpm and 310 lb.-ft. of torque on tap, long drives to the wilderness are transformed from a routine chore to an extreme sport. When the traffic clears, downshift the 6-speed manual gearbox, put the pedal to the metal and ear-to-ear grins are guaranteed. Of course, Volvo recommends that the driver observe all posted speed limits.

Right out of the box, the stock C30 channels the engine's torque to the front wheels. Thinking outside the box, Heico transformed the show car to full-time all-wheel drive. By no means is this a slam-dunk conversion. Serious engineering work was needed to get it right.

Heico collaborated with the pros at Haldex of Sweden, world-renown for their track record as an OEM supplier of AWD components to Volvo Cars. The C30 concept is fitted with electronically controlled AWD with custom software integration that automatically transfers more power to the wheels with the best grip. The benefits on slippery surfaces are obvious, yet AWD also improves handling on completely dry roads.

Active enthusiasts expect flexibility as well as performance. So this special C30 is decked out with front and rear Heico coil-over suspension that's adjustable for ride height. Carving corners with glee while turning heads in the process is the job of Volution® 8 x 18-inch sport alloy wheels shod with Toyo R888 245/40R-18 tires. In between the action, scope out the custom designed Heico pattern on the tread.

Because all good rides have to come to an end, stomping on the binders brings the C30 to a stop with authority. The brakes feature Heico 4-piston calipers with 320mm custom vented and slotted rotors in front and 285mm kits in the back. A vibrant blue hue has been applied to the calipers for a totally rad look.

The cabin has the look and feel of premium quality materials. Modified Volvo sport bucket seats are trimmed with handcrafted "Lugano" leather in black and alpaca gray hides with gray stitching and embossed with the Burton logo. Heico further enhanced the interior with its aluminum sport pedals and footrest, shift knob, e-brake handle, door pin set and floor mats. The thick-rimmed steering wheel with auxiliary controls is trimmed to match the seat upholstery.

Heico Sportiv was founded outside of Frankfurt, Germany in 1995. It has grown to become Europe's leading Volvo tuning firm. Heico has the longest running history of endurance racing featuring Volvo cars spanning 12 years. This serves as the engineering basis for offering high-quality components for Volvo road cars.