Hybrids traditionally have been more economical in city driving than on the highway, unlike conventional vehicles. C-MAX Hybrid is Ford's first hybrid vehicle to offer 47 mpg across the board.

C-MAX Hybrid returns the same fuel economy whether driving cross-country or across the city – stemming mostly from a growing list of Ford innovations that have helped the vehicle to deliver an impressive list of metrics, such as its 570-mile overall range, taking customers from Los Angeles to Las Vegas and back on one tank of gas. "The all-new C-MAX Hybrid is a great symbol of how Ford has transformed into a fuel-economy and technology leader with 47 mpg across the board and a highway rating 7 mpg better than Toyota Prius v," said Ford Vice President of Powertrain Engineering Joe Bakaj. "We've done this with innovation – represented by nearly 500 hybrid patents – while driving costs down 30 percent so we can bring these fuel-saving vehicles to more customers."

C-MAX Hybrid is expected to be America's most affordable hybrid utility vehicle with a base price of $25,995, including destination and delivery, which is $1,300 lower than Toyota Prius v. C-MAX Hybrid is currently available for order at Ford dealers nationwide.

"City, highway, and everywhere in between, C-MAX Hybrid is EPA-certified at 47 mpg," Bakaj said. "It's a win-win-win."

The power of C-MAX Hybrid stems from the combination of a gasoline engine and a battery-driven electric motor, providing customers with "real car" performance and capability. C-MAX Hybrid will offer a top speed of 62 mph in EV mode and 188 net horsepower, beating the Toyota Prius v by more than 50 horsepower. When powered by gasoline, C-MAX Hybrid uses the all-new 2.0-liter Atkinson-cycle four-cylinder engine – powerful and fuel efficient and among the most advanced non-turbocharged four-cylinder powertrains Ford has ever offered.

C-MAX Hybrid also offers class-exclusive technologies such as SmartGauge with EcoGuide along with the available hands-free liftgate and active park assist.

The latest-generation SmartGauge® with EcoGuide is designed to help drivers get the most from the C-MAX Hybrid, providing information such as instantaneous fuel economy to help them more closely monitor how their driving behavior affects the vehicle's efficiency.

The Brake Coach feature – part of SmartGauge – helps drivers optimize their use of the braking system so that driving range can be enhanced through proper braking techniques. Redesigned imagery of green leaves shows overall driving efficiency – as drivers improve their efficient driving, they are rewarded with more leaves.

C-MAX Hybrid offers room for five people and plenty of cargo – making it perfect for the owner with an active lifestyle.

The vehicle has a high roofline – 63.9 inches – offering ample interior space and flexibility. C-MAX Hybrid offers 99.7 cubic feet of passenger space compared with 97 cubic feet in the Toyota. The spacious C-MAX Hybrid also provides greater headroom in both front and rear seats than the Prius v (41 and 39.4 inches, versus 39.6 and 38.6 inches). 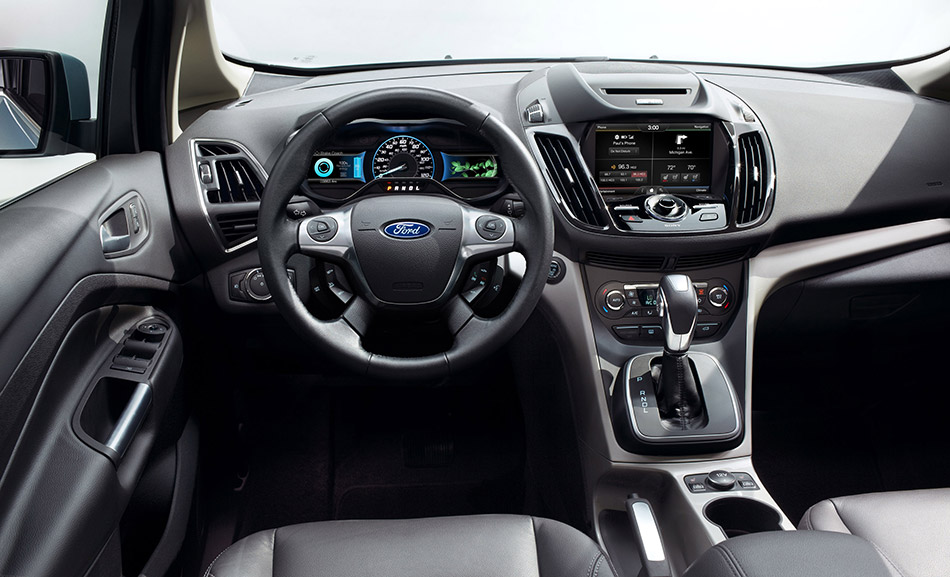 For cargo, C-MAX Hybrid has 60/40 split-fold rear seats. The seats easily fold flat with 52.6 cubic feet of space behind the first row and 24.5 cubic feet behind the second row.

C-MAX hybrid vehicles headline Ford's transformed lineup, one third of which will feature a model with 40 mpg or more in 2012, building on the company's commitment to give fuel-efficiency-minded customers the power of choice. Ford is tripling electrified vehicle production capacity by 2013 as part of this fuel-economy push.