After the large success of the two world record cars G-POWER M5 HURRICANE RS and G-POWER M6 HURRICANE CS which with their 750 hp strong 5,0l V10 bi-compressor engine can be only obtained as a complete vehicle via the G-POWER manufactory, the so-called "G-POWER Supercars" will become an inherent part of the future G-POWER programme. The G-POWER manufactory is a strongly growing business branch of the company G-POWER in which all individually produced complete vehicles, the so-called "G-POWER Supercars" are produced as an inherent part of the G-POWER programme and are entirely made by hand.

The company philosophy of the G-POWER manufactory which solely produces its automobiles in limited edition, is 100% customer dedication as far as the features and the strictly limited edition of the G-POWER Supercars are concerned and also the entire revision of the individual basic engines with the clear objective to produce the strongest and fastest BMW model in the world.

The latest masterpiece and an impressive example for the exceptional performance of the G-POWER manufactory is the G-POWER 760i STORM which now closes a gap in the BMW programme: M-Feeling for the BMW "Luxusliner". 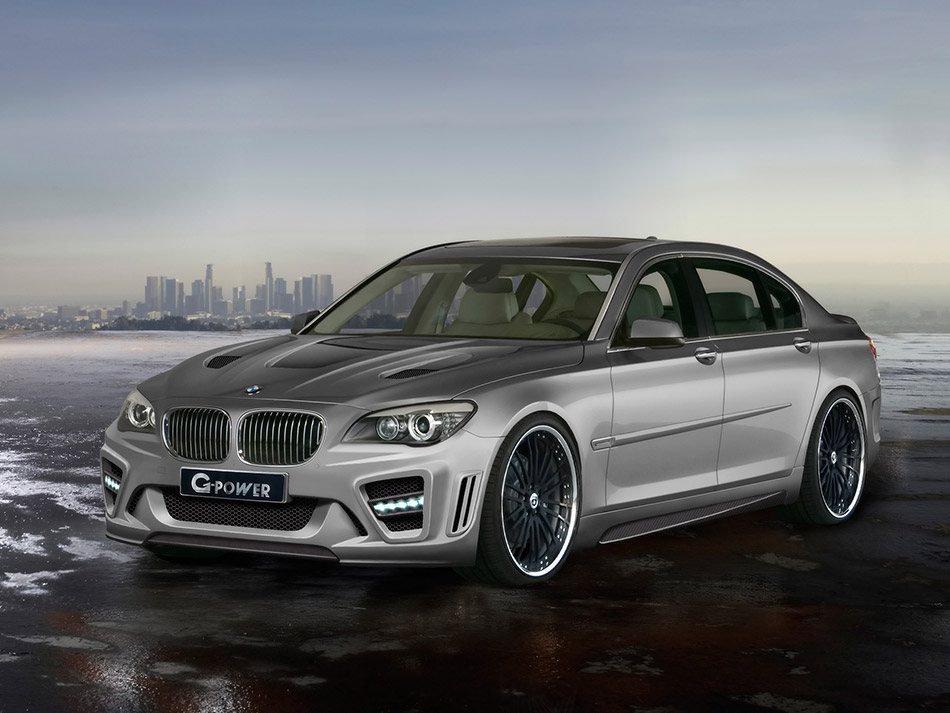 Due to customer preference, G-POWER, so far predominantly well known on modifying the potent BMW M models, has now focused on the BMW flagship in the luxury segment and developed an overall concept which optimally adjusts aerodynamics, rims and increased engine performance.

The core part of the G-POWER performance enhancement for the 6,0l V12 bi-turbo engine is a substantial modification of both "TwinPower" turbo chargers used by BMW. In co-operation with the compressor manufacturer ASA which can rely on 20 years experience in developing and producing radial compressors (basically, radial compressors are turbo charger compressor units which are put into motion by the crankshaft via a belt driven transmission), the performance of both turbo chargers was significantly improved without affecting their endurance.

As a result, the maximum boost pressure of 0.5 bar (relative) rises to 0.9 bar (relative). Flanking measures at the engine ensure that the increasing boost pressure can also be transformed into according extra power. Therefore, additional 181 hp (133 KW) are gained which enhance the overall performance to strong 725 hp at 5,500 r.p.m and render the maximum torque of 1000 Nm at already 2,000 r.p.m. In order to achieve this impressive extra performance, larger injection valves and an entirely new exhaust system for the reduction of dynamic pressure including the therefore necessary sports catalysers have been added, et al. A re-programmed engine control and significant modifications at BMW´s serial 8-speed transmission perfect the overall package harmoniously.

The enormous performance potential of the BMW V12 bi-turbo engine modified by G-POWER allows the G-POWER 760i driving performances which catapult it into the top range of its vehicle class. The acceleration from 0 to 100 km/h only takes 4.2 seconds. After 11.9 seconds, already 200 km/h are achieved. The top speed is 345 km/h.

But not only due to its enormous performance, the G-POWER 760i STORM propels to the top of its vehicle class, also the visual appearance of the aerodynamics kit which was exclusively developed for the STORM by G-POWER, underlines the exceptional quality of this G-POWER Supercar. Thereby, the aerodynamics pack in the brand-typical design is not only an end in itself, but it also improves the cold air supply to the cooling water and oil coolers at the vehicle front due to the enlarged air inlets at the front skirt and the vent holes in the bonnet. Due to these changes, the overall cooling performance has been increased by approx. 15 percent – a basis for the thermally always harmless performance enhancement.

The most outstanding component of the G-POWER aerodynamics kit for the BMW 760i, is the strikingly styled front skirt made of carbon fibre which entire replaces the original part. It gives the serially unobtrusive front of the current BMW 7-model the necessary aggressiveness which an automobile with 725 hp and a top speed of 345 km/h requires. Due to the elaborate shape, the aerodynamic lifting forces at the front axles were able to be reduced. Another highlight is the G-POWER STORM bonnet made of Kevlar hybrid which has a central Venturi engine compartment ventilation for the operation and two lateral ABS grids for the ventilation when the car stands still and guarantees an improved discharge of hot air from both turbo chargers out of the engine compartment and shapes the new face of the BMW 760i.

The G-POWER full carbon add-ons for the serial side skirts and the doors render a visual harmonious connection between the wheel houses by visually stretching the silhouette of the BMW 7-model. The wheel houses themselves are filled with forged three-part G-POWER SILVERSTONE RS aluminium wheels measuring 9.5x22 and 10.5x22 inches which are equipped with high-performance tyres of the development partner Michelin in the dimensions 265/30 ZR 22 at the front axle and 295/25 ZR 22 at the rear axle. Set up this way, the G-POWER 760i STORM always renders an optimal traction and a sporty handling which is additionally improved by the G-POWER sports spring set and a lowering by 30 mm.

At the rear, a full carbon rear spoiler and a full carbon diffuser which elegantly emphasise the 4 x 100 mm end pipes with integrated G-POWER logo generate more downforce at the rear axle and at the same time visually enhance the back section.

G-POWER refines the interior of the BMW 760i with exclusive accessories such as an ergonomically shaped sports steering wheel, a speedometer in G-POWER design and fine carbon rails for the side casing, central console and dashboard. Further customer wishes for exclusive interiors can always be fulfilled by the G-POWER manufactory with all possible leather- and ultra-suede colours.

The G-POWER 760i STORM is only available in a strictly limited small edition of only 10 automobiles world-wide and is offered at an overall price of € 365,000 (net) from the G-POWER manufactory in Autenzell. The long version G-POWER 760iL STORM F02 can be obtained at a surcharge of € 10,000.