Renault is presenting a New 2005 model Laguna at the 54th Amsterdam Motor Show this month, which is a comprehensive make-over for Renault's popular mid-size offering, available in two body styles, Hatch and Sport Tourer.

Special effort has been put into the quality of materials used and build quality, and harnessing new technologies to improve comfort. The first Laguna generation was a benchmark in safety being the first car in the sector to gain the five star EuroNCAP crash test rating and New Laguna goes one step further to consolidate its lead in its class in Europe. Furthermore, Renault has boosted driving pleasure with a more dynamic chassis and a special sports version called GT fitted with a new 205hp turbo petrol engine.

Renault has placed higher quality at the core of its product specification to provide a more rewarding ownership experience and greater reliability. 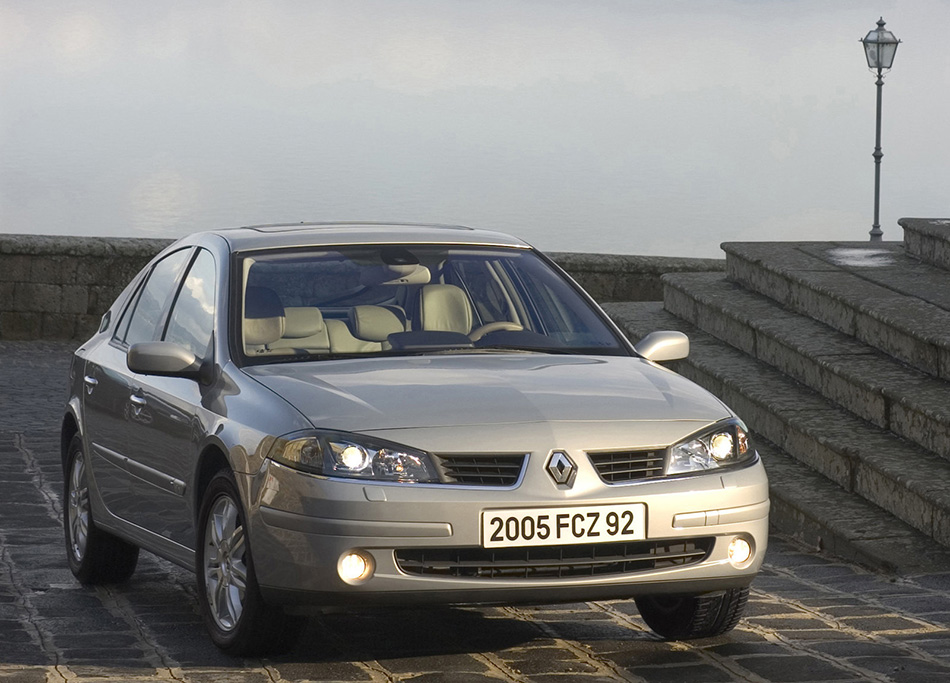 Renault's designers were lucky enough to start with what is widely regarded as one of the best looking shapes in the sector so looked at refining the current styling, making it more dynamic on the exterior and improving the quality on the inside. The new front design carries over the visual identity of the latest models in the Renault range, and includes a new one-piece component, which integrates the front bumper and the grille. The bonnet line is shortened and convex, the new headlamps extend along the sides, and the Renault badge is now more vertical. The V-shaped air intake in its lower section gives the vehicle a more dynamic feel. The chrome-finished trim strips round out New Laguna's appeal. At the rear, only the Hatch has a slightly changed tail light arrangement.

Inside, special attention was paid to the standard of finish and the ergonomics of the central controls. New Laguna welcomes its occupants into a subdued and refined atmosphere. Perceived and actual build quality have been enhanced in all areas, with a new design and new materials for the dashboard, and the integration of new technologies. The new dashboard is particularly user-friendly with a new centre console with the hi-fi and heating controls placed higher.

A new moulding surrounds the upper part of the dashboard, contributing to the flowing lines and the quality of the cabin interior finish. New Laguna now features fabrics that are more contemporary; velour has thus given way to softer micro fibre cloth. The car is available with two interior colour schemes according to trim level: dark charcoal or light beige.

More pleasure at the wheel and a new GT 205

A second flagship version will be available alongside the Initiale. The Laguna GT 205 is a Grand Touring version dedicated to driving enjoyment and is both sporting and civilised in everyday driving. It is only available with one engine - a new 2.0Turbo engine developing 205hp (150kW) with 300Nm of torque giving a swift 0-62mph time of 7.2 seconds and a top speed of 146mph – only 0.1 seconds behind the smaller Clio Renaultsport 182.

Inside, the treatment is both sporting and elegant, notably with leather upholstery in a mixture of dark charcoal and China red. The gear lever knob is satin-finished aluminium and the dashboard surround moulding has a chrome satin finish. The red piercings in the leather of the steering wheel, the door panels, the centre armrest and the centre panels of the bucket sports front seats emphasise the Grand Touring aspect of the car.

The petrol engine range starts with the 135hp 2.0 16V ( the 1.8 from the previous range is dropped), the 2.0 Turbo 165 is now up rated to 170hp and the 3.0 V6 24V with 210hp and a five speed proactive automatic transmission remains available on the range–topping luxury model, the Initiale.

The 2005 Laguna's diesel engine range gains an important newcomer. The most popular 1.9 dCi 120 is now available also available in a Euro IV emission version with a 10hp power upgrade to 130hp and a particle filter (FAP) fitted to the exhaust making it one of the cleanest diesels on the market for its power rating.

The entry-level 1.9 dCi 90 Euro IV is now upgraded to 95hp and the fourth dCi engine remains the 2.2 dCi 150 which can be had with a five speed proactive automatic transmission.

New Laguna is equipped with new technologies devoted to travelling comfort and driving enjoyment: the Renault Card with hands-free engine ignition available on Mégane/Scenic and Espace debuts on Laguna, the parking brake is now automatic and a new Carminat 3D Navigation and Communication centre is available.

Carminat Navigation and Communication is a leading top-range multimedia system which offers ease of use and efficiency, notably through time-saving when on the move, while guaranteeing the safety of its user. It now combines a new top-level 3D navigation system with "birdview", a Cabasse Tronic 4x50W audio system with 6CD changer in the dashboard and the ability to play CDs in MP3 format, and hands-free controls for a Bluetooth telephone.

It is controlled via a highly ergonomic central multimedia selector installed in line with the centre armrest, where the conventional handbrake used to be. Drivers can operate it without taking their eyes off the road, thanks to its different-shaped buttons which enable tactile recognition – part of Renault's Touch design philosophy.

New Laguna is equipped with the third-generation Renault System for Restraint and Protection (SRP) which notably includes eight airbags. Developments include the adoption of an audible warning if the passenger seat belt is not fastened, airbags which cater for a wider range of impact configurations, and new-generation head restraints with integral adjustment for the front seats. These feature support runners which now slide within the head restraint itself rather than in the upper part of the backrest. They improve the posture of the back and provide better support for the head.

In the area of child safety, the rear side seats can be fitted with a convertible child head restraint. In the closed position, this looks the same as a standard adult head restraint. When it is opened it flips lower to form a protective cocoon around the head of a child seated on a booster.

New Laguna has an ESP with understeer control that now takes account of the elasto-kinematics of the suspension and wear in the tyres.

The ASR traction control function complements the ESP when starting from rest or accelerating in conditions of poor adhesion. It is also now more effective on "split-mu" surfaces, with grip on a single wheel, or on gradients up to 15%.

By comparison with the previous version, adaptive-range xenon headlamps provide improved lighting. The headlamps are equipped with a "lifting dipped beam" function to improve light output. In addition, the beam height is constantly controlled, both statically and dynamically, to take account of the car's pitch attitude. In urban driving and at low speeds, the beam adapts itself by angling downwards. It does not dazzle other road users. With the adoption of elliptical lenses, the xenon-type dipped beam units gain in size, output and consistency.