The high-speed test of "auto motor and sport" in Nardo in southern Italy is the ultimate challenge for all vehicle manufacturers. High temperatures and the fastest automobile race track in the world that knows only one load condition: full throttle. The 12.3 km-long route is basically a circle with a diameter of 4 km and an elevated roadway that is reminiscent of a steep curve. In practice, this results in an infinite straight line for miles of continuous full load driving, an operating condition that puts utmost load on the engine. Add uncomfortably high ambient temperatures and it simply doesn't get any more challenging.

This abusive environment naturally separates automotive wheat from the chaff, because only those tuners who have carefully shepherded their design from development to production will survive the extreme loads in the "auto motor und sport" high-speed test in Nardo with no major engine damage. In addition, pushing the system to the top-speed limits in the real-world provides merciless feedback on the achieved performance improvements. Many tuners instead post performance numbers based solely on short-term dynomometer testing which are subject to many variables, and thus opens the door to abuse. It is certainly difficult to determine whether performance gains will hold up in the real world if such tests are the only ones performed. 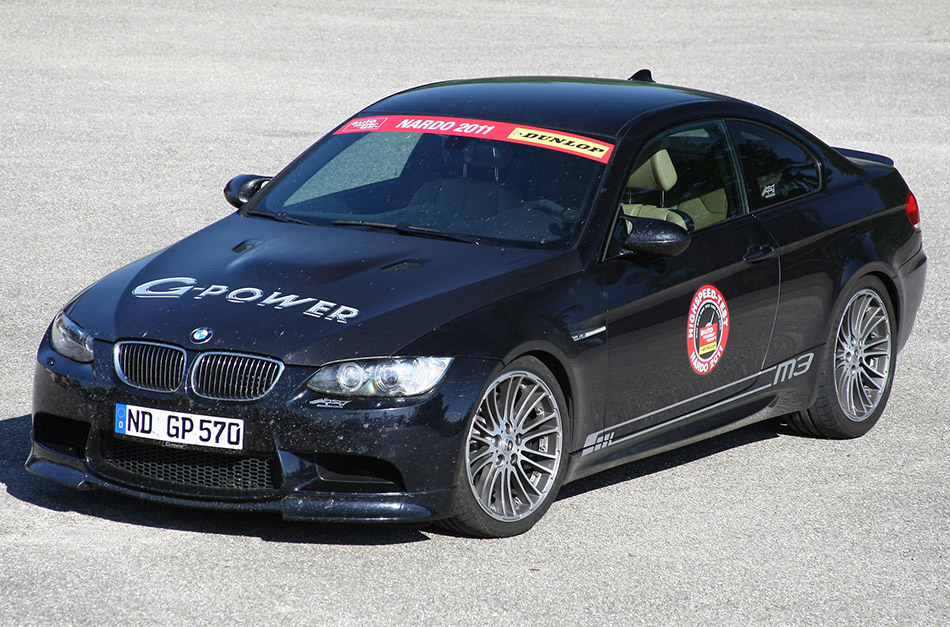 G-POWER embraces the challenge with enthusiasm; this is the third time in 2011 that G-POWER has conducted a High Speed Test. It is an excellent chance to demonstrate the impressive, real-world performance of our supercharger systems and showcase the superior quality of G-POWER products.

Beginning with CAD development based on industry standards and on through prototyping and the selection of OEM-quality components, G-POWER continues its commitment to excellence through strenuous test drives and hot-country trials in the United Arab Emirates to ensure exceptionally high quality, reliability and durability. G-POWER is the only BMW tuner in the world to leverage the skills of our technology partner, AVL, during the development work. AVL technologies allow the combustion pressure in the combustion chamber to be determined precisely. Thanks to this equipment, the development engineers are able to develop software for the engine control unit that maintains the maximum combustion pressure of a BMW M3 supercharged with the G-POWER "Sporty Drive" supercharger system to a level comparable with the production engine. Thus, there is no evidence of overuse.

The ASA supercharger used in the system reflects the robustness and stability of BMW in every respect. ASA superchargers are used not only in the ALPINA B5S, B6S and B7, but also in the ALPINA B6 GT3. In the factory race cars ALPINA campaigned for racing in the "Green Hell" - the 24 hour race at the Nürburgring – ASA impressively demonstrated its reliability and quality over more than 3,500 km. The exclusive use of components of OEM quality is a fundamental part of the G-POWER philosophy and basis for the superior quality and durability of the G-POWER supercharger systems.

To demonstrate our impressive quality lead, G-POWER made the conscious decision to perform the high-speed tests on a vehicle using a standard production kit with no special modifications.

Thus prepared, and after a 1,500 km journey with Christian Stöber, Vice President and Technical Director at G-POWER, at the helm of the "standard" M3 G-POWER SK II, the car achieved a top speed of exactly 333.29 km/h on Sunday, May 22nd. It is believed that with a taller gear, the vehicle could have topped 340 km/h. Thanks to a video recording, you can witness this moment "live" (watch the video). Only two cars with 900hp and 1000hp were faster at this event.

The subsequently performed acceleration measurements confirmed the G-POWER M3 SK II has top marks here as well: For the standard sprint from 0-100 km/h and 0-200 km/h, values of 4.4 s* and 12.9 s* were observed.

For negative acceleration, G-POWER offers a high-performance brake system in the program. Powerful disc brakes with 396 mm diameter at the front axle and 380 mm at the rear axle in conjunction with 6-piston and 4-piston calipers allow decellerations beyond 1.0g. Of course, G-POWER customers are provided with the choice of rotor material: both steel brake discs and ceramic alternatives (which are about 50% lighter) are available.

After this eventful weekend, Mr. Stöber happily returned the G-POWER M3 SK II Autenzell by driving it back personally. He spent just over four days and just over 3,000 km behind the wheel of the 570hp M3 G-POWER SK II and commented that the experience was "one of my best business trips ever..."