Although they're based on the same architecture and share styling elements, the all-new 2015 Yukon and Yukon XL – and Yukon Denali / Yukon XL Denali – are engineered for the different needs of different SUV customers. All models deliver more expressive designs, ergonomically enhanced interiors and greater infotainment options.

Denali models are distinguished with unique exterior and interior elements, as well as exclusive features not shared with other Yukon models, including active noise cancellation.

Dimensionally, the Yukon XL's 130-inch (3,302 mm) wheelbase is 14 inches longer than Yukon, and its 224.3-inch (5,697 mm) overall length is about 20 inches longer than Yukon. Inside, that means slightly more second-row legroom for Yukon XL passengers, but nearly 10 inches more legroom for the third-row passengers – a primary purchase decision for many Yukon XL customers. 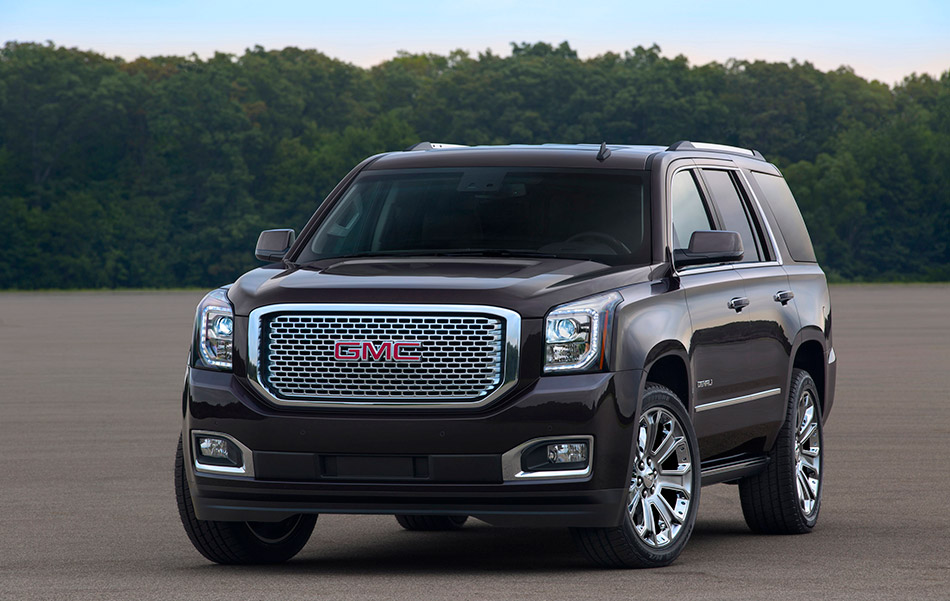 When it comes to trailering capability, Yukon and Yukon XL are engineered to make it easier, with features including a tow/haul mode, trailer sway control, auto grade braking and hill-start assist. The ratings between them are similar, but because of the gross vehicle weight rating differences between the vehicles, the lighter Yukon carries a slightly higher maximum capacity: 8,500 pounds (2,855 kg) vs. the Yukon XL's 8,300-pound (3,765 kg) rating (2WD models compared).

The face of GMC

Yukon and Yukon Denali models share a familial look of rugged refinement that is seen across the brand's lineup, from the Sierra to the Acadia and all-new Canyon midsize truck.

On all models, new inlaid doors fit into the body side openings instead of over the top of the body, significantly improving the quietness of the interior cabin and contributing to improved aerodynamics – an attribute that helps the vehicles slip through the air on the highway with less drag for greater efficiency. Lightweight aluminum hood and aluminum liftgate panels also enhance efficiency through reduced overall mass.

A standard rear spoiler on the liftgate houses a relocated rear window wiper that is hidden when not in use. The liftgate also features new worm screw-style arms that take up less interior space than the previous gooseneck arms.

The interiors of the new Yukon and Yukon XL have been refined to enhance functionality and comfort, while delivering the technologies that are more important in the daily routines of increasingly connected customers. Premium materials and enhanced ergonomics demonstrate the SUVs' blend of sophistication, craftsmanship and function.

The instrument panel design for all models has a straightforward design featuring a large, easy-to-view cluster. For Yukon SLE and SLT, it includes a 4.2-inch color driver information center display in the center of the cluster, for vehicle and infotainment and other data. Denali models feature an eight-inch, reconfigurable cluster display.

All functions for the Denali cluster are controlled via the steering wheel and are integrated with the vehicle's center stack so drivers can access audio, phone and navigation functions in the cluster. The unique cluster also includes tow/haul mode information, such as brake settings, gain/output and connection data – a first for Denali.

On all Yukon and Denali models, there is also an eight-inch-diagonal color touch screen radio in the center of the instrument panel, which incorporates a secured storage bin behind the motorized screen.

The floor-mounted console has map pockets along the side, multiple USB ports and a new 110-volt outlet. Plus, there's a spot designed specifically for cell phone storage. There is also a new overhead console sunglasses holder that features a conversation mirror, and the rear-seat cupholders have been relocated from the back of the floor console to the rear doors, creating a new storage area for rear-seat passengers.

Ambient lighting highlights all functional areas, including footwells and door handles. Another lit area is the center floor console (on vehicles with bucket seats), which features two bins that provide combined storage of more than 1.2 cubic feet (35 liters), including provisions for hanging files or a laptop.

Designers also worked with ergonomics experts on the placement and size of controls, resulting in more intuitive locations for many features. The available integrated trailer brake controller, for example, has been moved higher on the left side of the steering column, where drivers will more naturally reach for it.

All of the Yukon and Yukon XL's seats are designed for greater durability, with a new seat structure that incorporates more durable foam. It not only contributes to greater comfort, but also helps the seats hold their shape better over time.

To give owners the added functionality of going from passenger space to cargo usage, the third-row seat now folds flat to the floor. For easy access to the third row, there are power-release second-row switches on the pillar behind the rear door. And to make loading long and bulky items easy, there are power switches for both the second- and third-row seats just inside the rear cargo area on the passenger side of the vehicle.

The 2015 GMC Yukon's next-generation IntelliLink infotainment system is better connected and offers passengers more choices. It provides easy, intuitive operation of basic functions, yet it is also highly customizable and capable of linking up to 10 devices such as smartphones, tablets and MP3 players, giving customers more ways of staying connected – all controlled via a standard eight-inch color touch screen.

Yukon models are offered with radio systems that deliver comprehensive connectivity options. Standard on SLE and SLT is a system featuring:

Standard on Denali models and available on SLT is a navigation radio that includes all of the features above, plus embedded navigation, flash memory navigation map capability and map updates via USB drive.