HAMANN - Motorsport, points to the 82. Geneva Motor Show as a world premiere for the first time the "memoR", based on the McLaren MP4-12 c.

At its release, the McLaren MP4-12C in the industry and in the world blogger community learned a contradictory picture – its optical performance is also in the judgement of the local English press so not in line with his razor-sharp handling, superior performance and the class standard for quality.

All too often, its design has been criticized as too arbitrary and too little on its own. "Evoraesque" was his appearance and not in line with his high-tech - carbon chassis. An ideal base for the HAMANN design team: When it comes to recognize the potential nature of a supercar, and precisely to redefine, the style gurus from the swebian Laupheim are a safe Bank: a synthesis of race heritage, brand identity, and avant-garde design features have it transformed the newcomers from Woking in a real EyeCatcher and helped him to the adequate performance, which is a prerequisite in the League of the mid-engine sports car: The presence of uniqueness. 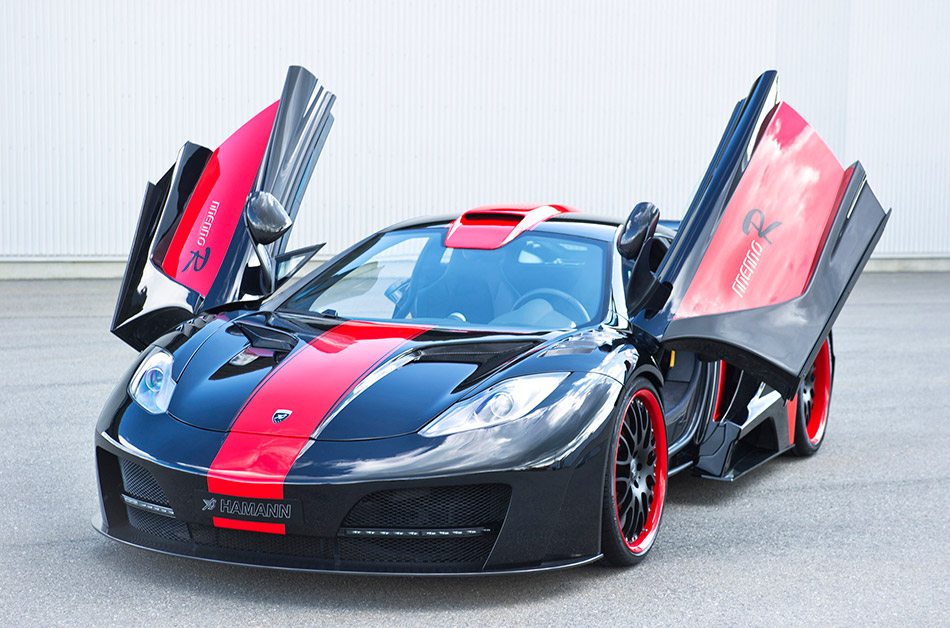 In-depth analysis lead managers in the fields of marketing, sales, and design development agreed fairly quickly: an automobile of the calibre of F1 1995 must be from the MP4-12 c, who must hide behind the relevant known devices of Italian origin and is able to keep those of other British athletes with due distance at a distance his charisma on the road. With a sharp eye were the reasons for the creative areas of subjects out antomizes and explores the appropriate measures as the somewhat titchy acting flounder could become a serious competitor for adults:

A crucial source of mix up of the MP4-12 c with other smaller athletes from England is the excessive surface definition with concave elements. What appears initially to offer the advantage of optical lightness, proposes to here quickly the impression of hollowness, instability and rowdy attitude. As soon as the border of the front air intakes, the cross section of the hood, the rear side panel and the sill area were dismissed from the Hamann-gym looked the volume of the whole even more after man car.

But to make sure, that the impression of concentrated power always reminded a fully January, the brilliant lines of the LeMans winner 1995 were interpreted now so new, that they just as far as the brand identity remembered that modernity and avant-garde of the "memoR" never for consideration is available - on these perfect swing can you simply not resign.

The irresistible mix of spectacular aerodynamic vents and guiding surfaces together with the closed circular silhouette precisely the tension creates one to burst tensioning the muscle, like in the full volume of extended wheel arches that barely cover the huge forged wheels or the sinewy hoods Tower, at the same time representing a defusing of the dangerous wiper edges in the event of a collision of passers-by.

The large front splitter, the upper and side wheel arch forced vents, the lateral deep drawn down ground effect door sills and the extended rear diffuser give not only the consistent racing look in combination with the large rear wing, but ensure also the necessary aerodynamic balance and the welcome pressure for a plus of G-force and ultimately the functional added value of this aesthetically compelling concept.

HAMANN would not HAMANN but if not still that of refinement would be the luminaries of customizing, they have been the Decade ends to drive the concept of individualization to the extreme:

The subtle C pillar, which falls for is taken not in the eye produces a huge effect: the rear fender is perceived now from the rear window up to the wheel arch as a member of the monster wide and even though also the silhouette is soft closed, a spectacular increase in the perceived width of the stern, which crowns the rear end in conjunction with the diffusor-page boxes, which consistently continues the lines of the side sills to the rear and the triple exhaust arises: Who sees the "memoR" from behind, and that should be a majority of mobile contemporaries, has no doubt what he is really the more: A distinctive member of the League of fastest and breathtaking supercar from the house of Hamann.