Hyundai Motor Company, South Korea's largest automaker, today unveiled its significantly-upgraded Grandeur* and the exterior design of a new flagship premium sedan codenamed 'AG' - scheduled to debut in Korea later this year - at the 2014 Busan International Motor Show, which runs from May 29 to June 8 under the theme of "Ocean of Vehicles, Feeding the World."

"Amid tougher business conditions and fiercer competition, Hyundai Motor is continuously striving to provide products and services with solid fundamentals," Choong Ho Kim, President and CEO of Hyundai Motor, said today during his opening remarks at the Busan Exhibition and Convention Center (BEXCO). "We place customer satisfaction before anything else, and the improved Grandeur and 'AG', introduced today, are at the center of these efforts, fully reflecting our customers' voices."

* Grandeur is badged as Azera in markets outside Korea 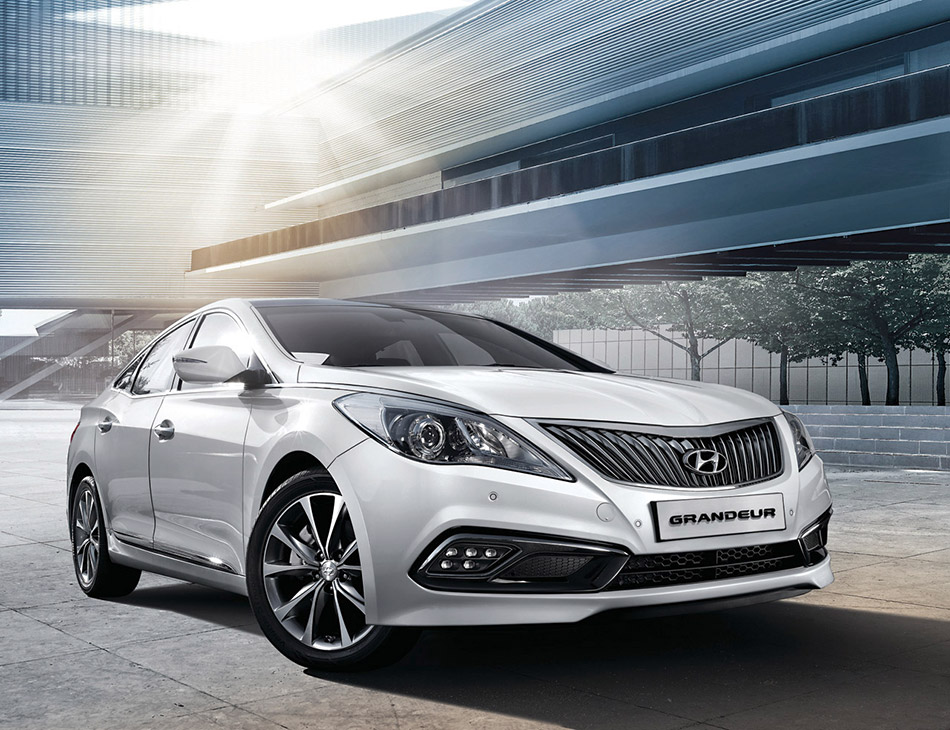 Customers will also enjoy enhanced performance, benefitting from the Theta II 2.4-liter GDI petrol engine, which has been re-engineered to offer improved everyday drivability in the mid-row range of rpm. The engine delivers 190 ps and 24.6 kg•m torque. Furthermore, improvements to the motor-driven power steering system result in a greater handling responsiveness and stability.

Grandeur has also been upgraded with redesigned exterior front and rear styling, as well as enhanced audio equipment. The cabin receives a remodeled central fascia with the latest HVAC (Heating, Ventilation, Air Conditioning) controls, as well as a new 8-inch navigation screen as standard.

The upgraded Grandeur is 10 millimeters longer (length) than the previous model. A high-gloss two-tone rear bumper design provides a wide and elegant appearance, while a stylish new grille and front bumper complement the LED fog lamps to create a cutting-edge front visual aspect.

'AG' is an elegant large sedan that underlines Hyundai Motor's position as a manufacturer of premium vehicles, offering distinctive styling. Displaying an elegant yet simple exterior, 'AG' continues the modern interpretation of Fluidic Sculpture 2.0, with a distinctive long hood, and a refined character-line that runs the length of the wheelbase.

This new front-wheel drive flagship sedan will offer quiet and sophisticated driving comfort, while adopting a series of advanced convenience features. 'AG' is expected to reinforce the premium image of the Hyundai Motor brand when it hits Korean showrooms in the second half of this year.

Hyundai Motor's impressive booth at BEXCO focuses on not only showcasing its new cars and technologies, but the brand's investment in football and motorsports. Over ten exhibition zones include displays for each aspect of the Korean manufacturer's activities. In total, Hyundai Motor exhibits a total of 25 cars at the event, including its commercial vehicles.

In particular, Hyundai Motor's stunning next-generation fuel cell concept, Intrado, made its Asian debut at the show. Intrado is a unique vehicle that showcases Hyundai Motor's vision of future mobility. Powered by a next-generation hydrogen fuel-cell powertrain, the vehicle's body structure is almost 60% lighter than the conventional one thanks to its central carbon frame structure and innovative construction methods.

Hyundai Motor's commitment to sporting involvement is represented by a World Cup Zone, which celebrates Hyundai Motor's sponsorship of the 2014 FIFA World Cup Brazil™ with a range of vehicles wrapped in themed livery.

Paying tribute to the brand's involvement in global motor sport, an i20 WRC rally car is displayed alongside other key competition vehicles, such as the Genesis Coupe Racing Car, in a dedicated Motor Sports zone.

Showcasing Hyundai Motor's brand enhancement through design, a selection of cars created through collaboration projects are also displayed on the booth, including the 'i40 Art Car' by Karim Rashid, 'My Baby' project and the 'Equus by Hermes' concept car.

Hyundai Motor's dedication to alternative fuel solutions can be shown by Sonata and Grandeur Hybrids, together with the world's first mass-produced fuel cell vehicle, the ix35 Fuel Cell - allowing visitors to understand and appreciate the brand's forward-thinking approach to mobility.