In 2003, the Accord underwent another major redesign. This time, Honda decided to create two different cars that would bear the Accord name in different markets. The car known as the Accord in the US and Asian markets is based on the JDM Honda Inspire. Meanwhile the Japanese and European markets received a smaller, sportier Accord. This car was later released in the US as the Acura TSX.

Larger than ever, the Accord is given a new level of refinement with chrome interior accents and higher grade materials. The lineup still includes the seemingly de-facto DX, LX, EX, LX-V6 and EX-V6. Mechanically, the 4-cylinder engine was the new K-series, and the 6-cylinder was the same J-series V6 as the sixth generation's, but its intake runners, exhaust, and headers contributed to a 40 hp (30 kW) increase. A 5-speed automatic transmission was also new for 2003. Now a vastly different car to the worldwide Accord, the North American model grew larger still, gaining more interior room and weight then its international counterpart. Honda sold the North American Accord in a few other markets including Asian (now made in Thailand), Middle Eastern, Caribbean, Australian and New Zealand markets with mixed results. For the first time, Honda offered an "enthusiast" version of the Accord in the US, adding a sports suspension and mating the 6-speed manual transmission from the Acura CL to the V6 Honda Accord Coupe.

Aspecific 4-cylinder model is the first production car in the world to meet California's Super Ultra Low Emission standards. The 2003 model year also debuted Honda's GPS assisted Navigation system as an option for the Accord. Prior to 2003, it was only available on the higher end Acura line as well as the Honda Odyssey. The first 2003 Honda Accord rolled off the Marysville, OH assembly line on September 26, 2002. 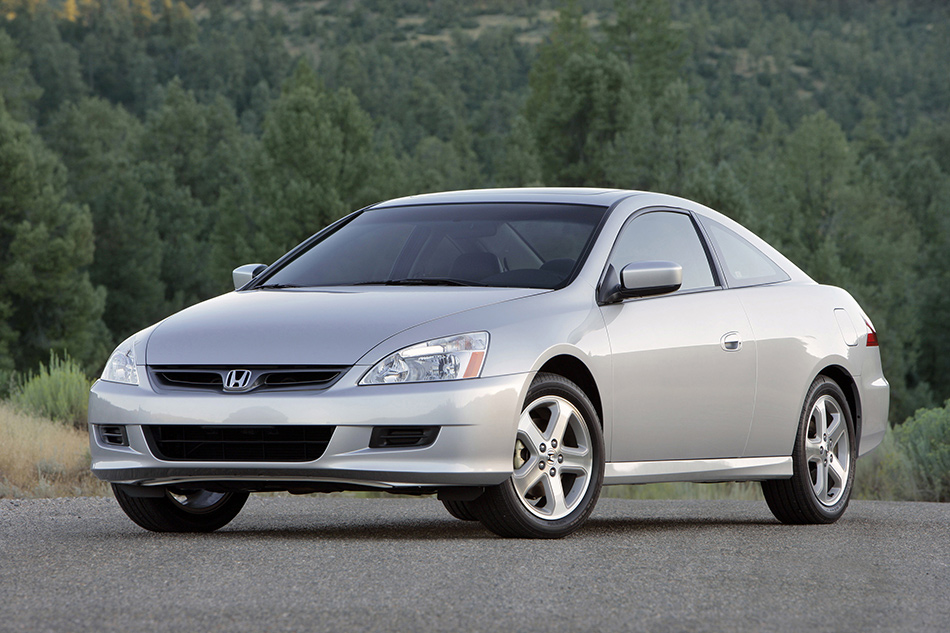 In 2004 Honda announced that they would release a hybrid version of the USDM Accord called the Honda Accord Hybrid featuring Honda's IMA technology. In 2004 Honda also first offered XM Satellite Radio as a factory installed option.

For 2005, the Accord received minor updates such as revised taillights (all red) and new wheel designs. The Accord became Canada's top-selling mid-size car, and this was the first model year of the Accord Hybrid.

For its 2006 model year, the Accord received several new improvements. This was motivated on the Accord's 30th anniversary. Some enthusiasts argue that the 2006 model year should be called generation 7.5, and the Accord gives it reminiscence to its competitors for 2006 (e.g. Chevrolet Impala and Hyundai Sonata). The exterior was revised with new rear end styling (most noticeably for the sedan), LED taillights, daytime running lights (DRLs) and heated side mirrors for US EX models. Heated mirrors and DRLs were previously available only on Accords sold in Canada. The 2006 model year also featured new wheel designs.

Vehicle Stability Assist (VSA), also known as Electronic Stability Control, and Brake assist became available on the V6 models for the first time. 17" wheels also became standard on the V6 models. The interior was also slightly redesigned with changes such as a new steering wheel cover, differently colored gauges and a differently styled shift knob for automatic transmission models. The GPS Navigation system was updated (4th generation) with a faster processor, more memory, and several new features, such as restaurant information from Zagat. A revised maintenance minder system was also added which gave owners reminders for scheduled maintenance such as oil changes based on operating conditions.

The 2006 model year is also the first year in which the V6 sedan was offered with a 6-speed manual transmission as an option.

The 2006 Accord Hybrid got the same revisions as the other Accords except for a 3.0 L V6 now making 253 hp and a larger battery pack. The things that differentiate the Hybrid from other Accords are the different rear light clusters, the antenna, the wheels, the mirror turn signals and the lack of a folding rear seat. In addition, the Hybrid version does not have the 4-way passenger seat.

The trim levels were also revised, with the DX trim being eliminated, instead being replaced by the VP (Value Package) trim which included air conditioning, keyless entry, power locks, and cruise control as standard features.