Named the Honda OSM (for Open Study Model), the two-seater joins the confirmed-for-production CR-Z sports hybrid and FCX Clarity hydrogen fuel cell car on the Honda stand at the show.

"We're trying to show that low emission cars can be attractive," says Andreas Sittel, Project Leader for OSM. "There is no reason why a car that's more environmentally friendly can't look great too - and be sporty and fun to drive." 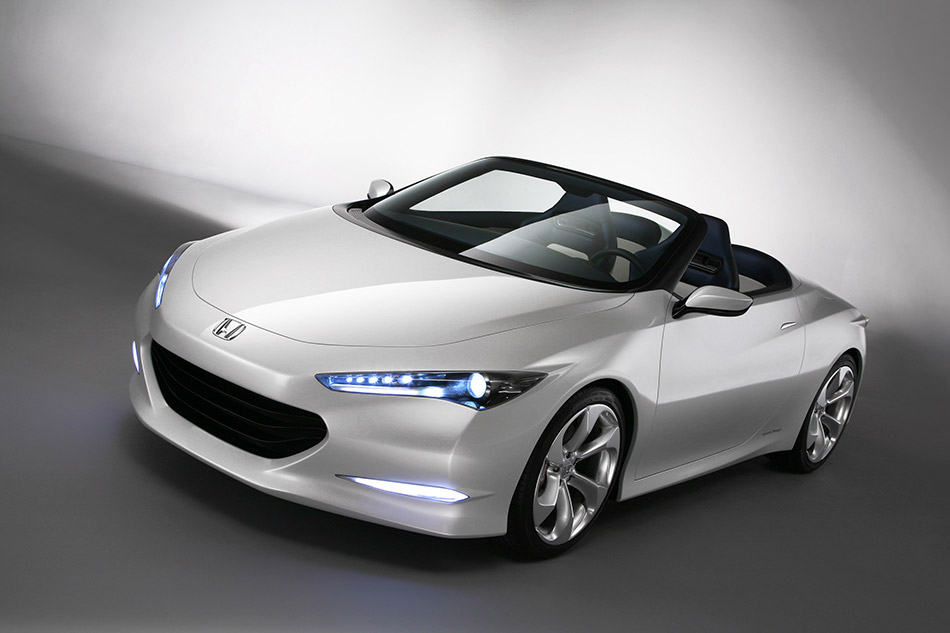 The concept for the project was 'Clean and Dynamic' - and this direction was followed for both the exterior and interior design, ensuring a joined-up, consistent 'language' between the two. One example of this can be seen at the rear of the car, where the body actually extends into the cabin between the seats.

The exterior design is a balance of smooth, rounded curves and sharp lines to provide definition in key areas. The headlights are cleverly integrated into the front end, stretching from the nose to the top of the wheel arches to look more like a part of the original body.

Inside, this uninterrupted, fluid approach is continued, with long sweeping curves extending from both door panels to form a frame for the instrument display. The concept for the dashboard was to avoid creating the traditional block of 'heavy' colour and material in front of the driver; in keeping with the clean and lightweight theme. For that reason, the dash is broken into sections, with the most important instruments in direct line-of-sight of the driver.

Key information is displayed in a rounded, enclosed central binnacle, with levels and figures in bright blue on a black background. This matches the trim inside the car, with the seats and door furniture trimmed in a new, gloss-effect blue leather, accompanied by white leather sections, in line with the exterior body colour, a one-off paint called Mystic Pearl.

The driver's main controls and functions are distributed in an intuitive layout, close at hand on a panel that curves downwards to the right of the driver. A centrally-mounted semi-sequential gear-shift points towards a fun-to-drive transmission, along with paddle shifts either side of the steering wheel. Integrated into the gearshifter itself is a red ignition 'start' button, which reinforces the sporty direction of the car.

The Honda OSM Concept was designed by Honda's R&D facility in Offenbach, Germany. It's the latest example of the young talent being developed within Honda's design studios in Europe - following the Honda Small Hybrid Sports Concept (Geneva 2007) and the Accord Tourer Concept (Frankfurt 2007).

At present, the Honda OSM is a design study model, and there are no plans for it to enter production.