All new for 2011 when it was named the "Most-Efficient Two Seater" by the EPA, the 2012 Honda CR-Z debuts with one available feature change - a new black seat fabric becomes an option on cars with the Crystal Black Pearl exterior color, replacing the standard silver mesh sport seats. The 2012 CR-Z starts at $19,545, plus a destination and handling charge of $770. 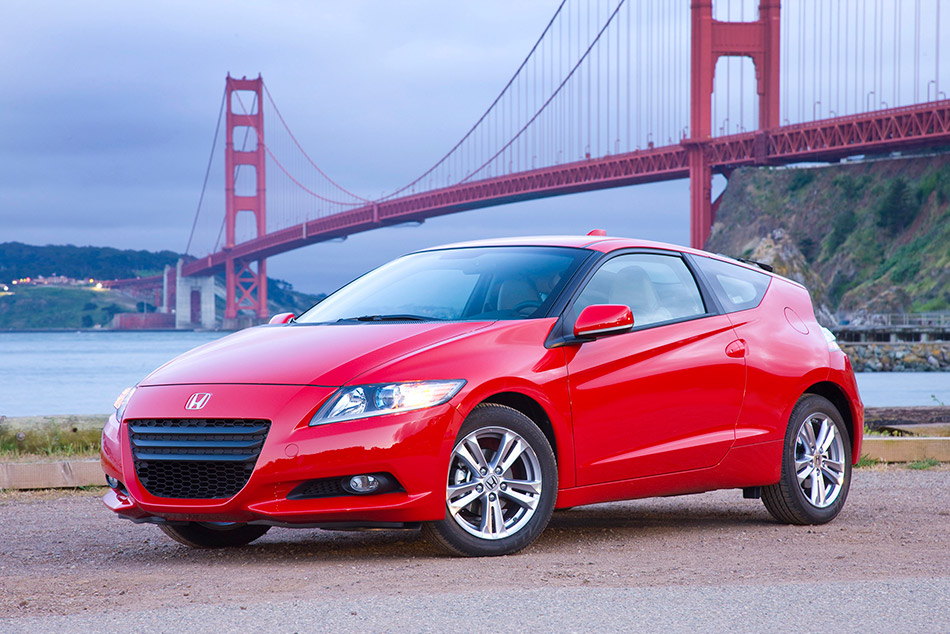 Technological Sophistication Inside and Out

A high-tech appearance and intuitive controls define the interior. Instrument panel meters illuminate with a three-dimensional blue color theme resulting in a multi-layered appearance. Set against textured black materials and aluminum-style trim accents, the upper portion of the dashboard extends toward the driver to provide a wraparound cockpit environment. Premium sport-oriented seats are designed to provide firm lateral support along with everyday driving comfort. A mid-ship console behind the front seats optimizes cargo space, and a hard-shell separator can be closed to create additional hidden storage.

The Honda CR-Z features a six-speaker, 160-watt AM/FM/CD audio system with an auxiliary input jack for connection to a portable audio player, and all models include a USB audio interface for connecting an iPod or other compatible audio device. Other audio features include speed-sensitive volume control and CD/MP3 text readout. The radio data system shows supplemental programming information from participating radio stations while also offering search-by-genre capability (not available on the CR-Z EX with navigation).

The Honda Satellite-Linked Navigation System™ is available on the CR-Z EX model and features a 6.5-inch display. The navigation system database includes more than 7-million points of interest and integrates the audio system. The voice recognition feature is capable of inputting numbers, street names and cities, in addition to more than 600 commands. Data storage is via a single DVD that contains information for the entire United States.

The Honda CR-Z hybrid powertrain is a unique variation of Honda's original IMA technology , which originally debuted on the 2000 Honda Insight, the first hybrid vehicle available for sale in North America. The system utilizes a four-cylinder, 16-valve, single-overhead cam engine with "intelligent" Variable Valve Timing and Lift Electronic Control (i-VTEC) that receives additional power from the Integrated Motor Assist (IMA) system's DC brushless electric motor. The system delivers a combined peak output of 122 horsepower at 6000 RPM and 128 lb-ft. of torque at 1000 to 1750 RPM (123 lb-ft. at 1000 to 2000 on CVT-equipped models).

The 10-kilowatt electric motor assists in acceleration and also acts as a generator during braking or coasting to capture kinetic energy that recharges the 100-volt IMA nickel-metal hydride battery pack. The gasoline engine can automatically turn off during vehicle stops to improve efficiency. When starting on steep inclines from a stop with the manual transmission, hill start assist temporarily prevents the vehicle from rolling backwards during the moment between releasing the brake, depressing the throttle and releasing the clutch.

Activated via three backlit buttons to the left of the steering wheel, the three-mode drive system allows the driver to select between individual modes of performance for Sport, Normal and Economy driving styles: