Infiniti's latest advanced concept vehicle, the Triant, made its world debut at Detroit's 2003 North American International Auto Show on a stage shared with a former Infiniti concept-turned-production-vehicle, the 2003 Infiniti FX45 premium crossover SUV. Like the all-new FX45, the Triant is designed to provide an innovative combination of sportiness, luxury features and all-wheel drive performance in a highly personal, dramatically styled package.

"Though the Triant is a futuristic design exploration, it would fit right in with today's exciting lineup of Infiniti performance luxury vehicles," said Mark McNabb, vice president and general manager, Infiniti Division. "Infiniti's product resurgence has continued in the past few years at an incredible pace. The Triant lets us stretch the envelope a little with some longer range thinking and design features such as its gullwing doors, GPS-linked 'turning' headlights and flexible rear seating/cargo area." 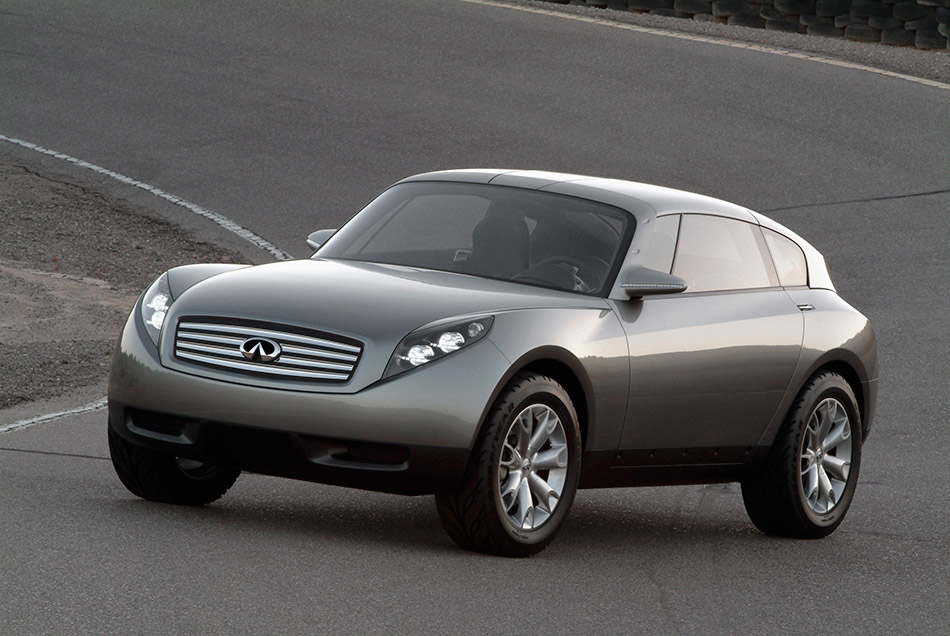 The Triant's exterior was designed as a modern interpretation of classic sporting vehicles – vehicles that expressed driving pleasure through a deeply rooted sense of beauty and elegance. Triant creates a similar feeling in a SUV through a fusion of authentic sports coupe styling and the latest in automotive technology with an emotional, Japanese-influenced design flavor.

The muscular "coke bottle" front fender treatment and sophisticated surface transition from the unique headlights, flowing down the inverse curve of the bodysides to the stretched rear fenders, creating an emotional sense of rhythm and power. The aggressive character of the front is picked up in the rear, with its wide shoulder surface and short overhangs projecting a look of spaciousness and SUV ability. Triant also offers some decidedly contemporary elements, including contoured three-lens headlights, clear lens taillights, sculpted side mirrors, integrated bumpers and recessed door opening switches.

The Triant's doors are a wide gullwing design, stretching over five-and-a-half feet in length and opening to nearly seven feet in height. The doors, which are electrically operated and assisted by six gas cylinders each, feature lightweight aluminum construction and a special door opening sensing system which helps avoid hitting people or objects when the doors open or close. Like the gullwing side doors, the large rear hatch swings widely open, offering exceptional access to the flexible cargo area.

"The designers' intent was to remind people of sports cars they used to own or aspire to own, yet at the same time bring to the Triant all the positive features of today's best designs – a high eye position for the driver, good ground clearance and ease of entry and exit," said McNabb.

Other major exterior features include an advanced headlight system that "guides" the headlight beams around turns with the aid of digital mapping data and GPS technology. The high beams swing up to 15 degrees, while the low beams swing up to 30 degrees in corners – providing greatly enhanced nighttime visibility, especially on mountain or switchback roads.

The inner reaches of the Triant concept's 2+2 cabin are equally intriguing, combining flexibility for active lifestyles with an Infiniti attention to enhancing the driving experience. It was designed with the understanding that all the unspoken "elements" that combine to make an interior – such as the form, details, materials, textures, lights and atmosphere – should reflect the personality of both the vehicle and the brand. For Triant, the interpretation of the "Infiniti feeling" is expressed in its comfort, quality, modernity and authentic Japanese undertones.

The organic and emotional surfaces and lines of Triant's interior visually illustrate the designers' intent of creating an environment that is comfortable to both the touch and to the eye. A careful blending of natural and high-tech materials is utilized to create harmony by "fusing contrast."

The interior's natural free-flowing form seems to drape over the instrument panel, door panels and rear seat, merging all three independent elements into one environment. At the same time, the driver-focused elements, such as the front seats, steering wheel and instruments have been designed with a sense of precision and geometric direction. A central backbone, in the form of the sweeping center console, visually creates a draping wave that connects the front and rear areas. The result is a natural, organic luxury reinforced by advanced technology features – creating a surprising, intriguing and inviting interior.

Beyond the atmospheric design elements, Triant also features a number of advanced features and equipment. The sports car-like driving position is complemented by a floating, column-mounted instrument cluster, steering wheel-mounted shift paddles with center console shift-by-wire automatic transmission shift lever and body-contoured front seats with carbon fiber shell and metal finish frame. The driver and passenger seats are mounted on active shock absorbers (similar to the design of active engine mounts). The seats have three preset driving positions – sports, cruising and off-road – with each setting utilizing the shock absorber mounts to give a different driving height and different damping levels to best suit the particular driving style and terrain.

A carbon-fiber electrically sliding center console cover hides the main control switches when not in use, while the retractable 7.0-inch LCD information center display with integrated navigation system also tucks neatly out of the way, providing a polished, highly finished look when the Triant is at rest.

There is also a large overhead center console, a pass-through in the center tunnel and a signature Infiniti analog clock.

The rear seat/rear cargo area is designed for total, spontaneous flexibility, with the deeply contoured rear seat designed to slide forward electronically nearly 20 inches when not in passenger use, essentially doubling the available cargo area. The rear seat structure also includes three secure storage compartments. Rear deck-mounted lockable "track balls" are included for easy luggage positioning and to help prevent luggage from moving without the use of tie-downs or netting.

"The Triant is functionally elegant – a compact SUV with big car luxury and amenities," said McNabb.

A High Level of On-road Performance, Handling and Ride Comfort

Though a fully capable SUV – with its height-adjustable suspension and SUV-like approach and departure angles – the Triant concept delivers on-road performance to match its sport coupe-like appearance.

At the heart of the Triant is a compact yet powerful 3.5-liter DOHC 24-valve V6 engine, mated to a 5-speed automatic transmission. An advanced ATTESA ET-S all-wheel drive system provides all-climate driving ability, while the 4-wheel independent suspension combines a comfortable ride with secure road holding. The suspension also can be raised 0.8 inches for off-pavement use and lowered 1.2 inches for highway driving.

"The Triant doesn't look like your typical compact SUV, though it certainly can perform like one," said McNabb. "Essentially, it's a vehicle one that enhances and encourages an active life and active spirit."