The Infiniti G37 Coupé offers dramatic performance in a thoroughly seductive shape. Although sharing a great deal of hardware with the Infiniti G37 Sedan, the Coupé is designed to appeal to different buyer.

The dynamic styling allied to its obvious performance potential will appeal to successful individuals who appreciate beautiful design and enjoy driving. They aren't prone to following the herd… and they might not even currently drive a coupé.

"The typical buyer of a Infiniti G37 Coupé will be a little younger than the four-door buyer, but no less discerning. He or she will be someone who appreciates quality but wants to make an even bolder statement," says Jim Wright, Vice President, Infiniti Europe.

"Infiniti G37 Coupé buyer might be an existing coupé driver but is just as likely to own a sports estate or a compact SUV."

When he does step into a Infiniti G37 Coupé, he'll find the exterior styling is matched by a refined interior. And when he starts the engine, he will find a true performance car that delivers what it promises. Top speed is limited at 250 km/h (155 mph), while 0-100 km/h takes just 5.8 seconds (on M/T version). 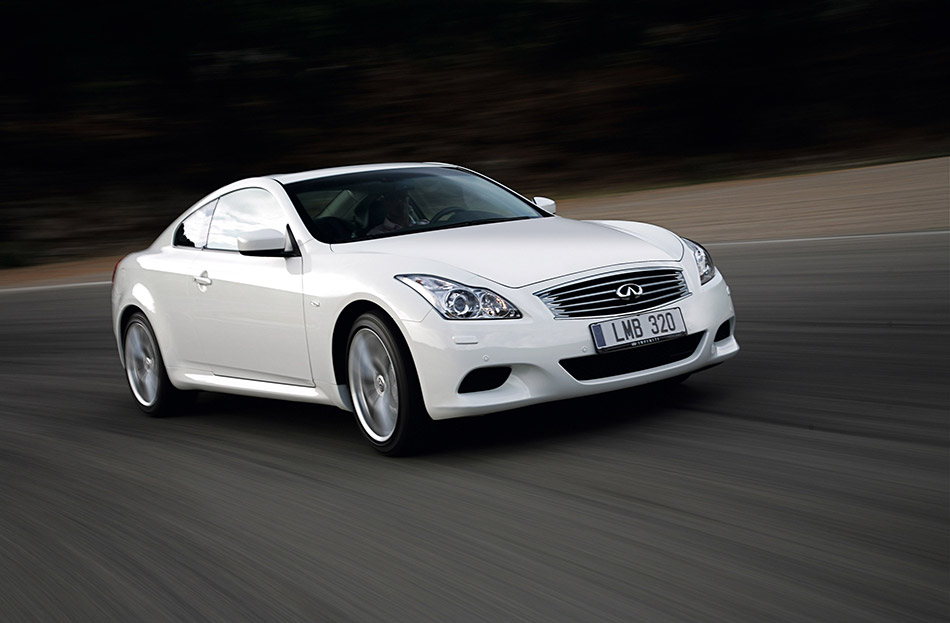 There are three versions of the Infiniti G37 Coupé on offer - the well equipped G37 Coupé, the more luxurious GT version with leather upholstery, and the sport-oriented S version with 4-Wheel Active Steer system, a Viscous Limited Slip Differential (VLSD) and sports suspension settings among other changes.

"The Infiniti G37 Coupé takes the best attributes of the four-door and adds even more. It's a car designed to appeal to the emotions, yet one which delivers on a practical level, too," says Bastien Schupp, Marketing Director, Infiniti Europe.

A long bonnet, short overhangs and dramatically raked roof line give the Infiniti G37 Coupé a silhouette that sets it apart from rival products based more heavily on their saloon counterparts.

Designed as a modern sports car without compromise, the Infiniti G37 Coupé has elegant and sophisticated proportions allied to an expressive, curving shoulder-line to give a feeling of movement even when stationary. The shorter and lower roofline also helps accentuate the Coupé's low centre of gravity and gives a clear indication that this is essentially a rear-wheel-drive car.

Curving 'character' lines at the front of the car mimic the lines of the front wings and help give the Coupé a more athletic and aggressive stance, while the wave-style aluminium bonnet incorporates a natural power dome to accentuate the potency of what lies beneath.

A special production process has been developed for installation of the headlights to ensure tight build tolerances and an exact fit into the complex front fascia.

Thanks to its shorter body, the Coupé's rear shoulder is even more muscular than the Sedan's, while the integral rear lip spoiler is more pronounced. The jewel-like taillights feature LED lamps to reinforce the Coupé's high-tech appeal.

The Infiniti G37 Coupé provides a sporting cockpit environment for the driver and a luxuriously open space for its passengers. The dashboard and centre console, complete with seven-inch colour display, adopts Infiniti design DNA with a 'double wave' upper section linked to a central vertical spine for a feeling of solidity. Textured aluminium trim inserts can be found on the centre console, the instrument binnacle and the door panels.

Its gracefully curved door trims have been inspired by traditional Japanese ceremonial swords, while the trim inserts are modelled on Japanese Washi handmade paper. Other signature Infiniti features are the elegant analogue clock on the dashboard and purple backlighting of instruments and controls.

Thanks to its long wheelbase, there is room in the rear compartment for two adults with easy ingress and egress provided by the wide opening doors and the electric fold and slide front seats. The practicality and loading capacity of Infiniti G37 Coupé is further improved by the folding rear seats

Constructed from lightweight aluminium, the engine features a two-part bed-plate construction which is more rigid than a single piece casting for reduced vibration levels. It also permits sustained use at higher revs: the V6 is red-lined at 7,500rpm.

The VQ37 unit features VVEL (Variable Valve Event and Lift) technology to optimise efficiency and, in turn, the balance between power, response, fuel efficiency and emissions.

By continually altering valve lift and therefore the quantity of air in the combustion chamber it provides a more powerful combustion phase to increase torque and power. Best of all, as the valves control the intake rather than a conventional butterfly, response to throttle inputs is immediate. VVEL improves fuel economy and lowers emissions compared to standard valve lift systems.

Precise mapping of the ECU, meanwhile, helps the engine provide a progressive 'swell' of power and torque, providing a 'building wave' of acceleration rather than a peaky power delivery.

In keeping with the performance profile of the Coupé, Infiniti engineers have developed a special aural soundtrack for the car. Equal length tubular exhaust manifolds and a symmetrical exhaust and silencer system have allowed the engineers to create a linear sound with a good balance between low and high frequency notes.

As well as a smooth shifting six-speed manual transmission, the Infiniti G37 Coupé is available with a new seven-speed automatic option with Adaptive Shift Control (ASC) and magnesium paddle shifters mounted behind the steering wheel.

Infiniti G37 Coupé uses the second-generation version of Infiniti's FM platform. The 'front midship' engine location sees the compact V6 mounted in the front of the car, but as low and as far back as possible, with most of the block behind the front axle line. The result lowers the centre of gravity and helps to deliver the optimum front to rear weight distribution.

The fully independent suspension uses lightweight aluminium components to reduce weight as much as possible. A double wishbone set up at the front and a subframe-mounted multi-link arrangement at the rear allied to an extremely rigid body shell, gives the Infiniti G37 Coupé agile handling perfectly in keeping with its performance potential.

To enhance the braking feel, the Infiniti G37 Coupé uses a 'link-design' pedal which becomes progressively firmer as g-forces and vehicle speed increases. As a result, the driver has a more direct sensation of the forces acting on the car as he brakes from high speed, as well as the benefit of increased assistance. At lower speeds the brake is easier to operate but with more travel relative to assistance.

The power steering system is a vehicle-speed-sensing type with a twin-orifice structure, which provides optimum steering effort at both high and low vehicle speeds.

The sports oriented G37S version has a number of chassis changes in keeping with its sharper profile. The principal enhancement is the addition of the 4-Wheel Active Steer (4WAS) system which helps improve handling performance still further by varying the front steering ratio and adjusting the geometry of the rear suspension according to steering input and vehicle speed.

Other standard features of the G37S include a Viscous Limited Slip Differential, recalibrated suspension settings and an enhanced braking system with four piston front brakes and two piston rears.

Infiniti G37 Coupé has a full complement of user friendly - and above all, useful - standard equipment, plus options for those who want to make even more of a statement.

Standard features include the intelligent I-key with smart access and push button starter, a six-disc, seven-speaker audio system with an RCA AUX-in jack socket for MP3 players. Bluetooth phone connectivity and cruise control with speed limiter can all be operated via switches on the leather-trimmed multi-function steering wheel.

Other standard features include power seats (with eight way adjustment on the driver's side and four way for the passenger), aluminium pedals and footrest, auto-dimming rear view mirror, front and rear parking sensors, automatic lights and wipers, 18-inch alloy wheels, six airbags and integrated fog lamps. For the perfect driving position, the binnacle is attached not to the dashboard but to the steering column itself, and moves with the wheel when the latter is adjusted for reach and rake.

In addition to its chassis and dynamic changes, the G37S adds a sports seat with manual thigh extension for the driver. The seats themselves are upholstered with leather as well as heated and have 14-way power adjustment (driver) and 8-way power adjustment (passenger). There's a tyre pressure monitoring system as standard, plus 19-inch alloy sports wheels.

The major option is the new seven-speed automatic transmission with manual mode and magnesium paddle shifters, enabling drivers to shift the transmission without releasing their hands from the steering wheel. With its additional forward gear, the new automatic transmission has a wider spread of ratios which benefits both fuel consumption and drivability. The seventh speed is effectively an overdrive ratio, returning improved fuel economy on a steady throttle without compromising in-gear flexibility for overtaking. Shift points are tuned to keep the engine in the largest part of the torque curve, ensuring there is always a healthy reserve when the driver wants to overtake. The linked Adaptive Shift Control (ASC) system switches between three different programs depending on input from the major control systems throughout the car.

Other options include Intelligent Cruise Control (ICC) which uses brake, throttle and laser sensors to help maintain a set distance between the Infiniti G37 Coupé and the car in front. In automatic transmission versions, the software reduces driver's workload even more allowing ICC to work from 0km/h to 180 km/h thanks to the "Full Speed Range" feature. An integral part of the ICC option for A/T models, the Intelligent Brake Assist system analyses closing speeds to a vehicle ahead helping reduce damage caused by a rear-end collision. If the driver must take immediate action to avoid a collision, the system sounds a warning to prompt driver action or can even activate the brakes to decelerate the vehicle.

A custom-engineered Bose® sound system sets a new standard for stereo performance in a car. Its 11 high-performance speakers provide crisp musical detail, with impactful low notes bringing G Coupé owners closer to the power and emotion of a live concert performance. To achieve this, Bose® engineers used proprietary digital signal processing and multiple channels of custom equalization to help tune the sound specifically for the vehicle. The Bose® sound system is available as part of a Multimedia pack with also incorporates a DVD navigation system with voice recognition and a rear-view parking camera. Final options include an electric glass sunroof, metallic paint and a temporary spare wheel (replacing standard tyre repair kit), while a subtle African Rosewood trim interior is available on the G37 GT.

High levels of passive safety were a priority at the design stage. As a result, the Infiniti G37 Coupé has a full complement of six airbags, with dual-stage front airbags, seat belt sensors and passenger seat occupancy sensor. The front seats incorporate hip and thorax bags, while there are front-to-rear curtain airbags for protection in a side impact.

Also standard is a pop-up bonnet, designed to offer greater crash protection for pedestrians. In the event of a collision, a small pyrotechnic charge raises the trailing edge of the bonnet close the lower edge of the windscreen. This creates a larger buffer between the bonnet and the top of the engine, providing a more yielding surface which in turn helps to reduce potential injuries.

Infiniti is synonymous with vehicle quality, and that's something that doesn't happen by accident.

On the Tochigi production line in Japan every vehicle - not just every tenth - is laser scanned to ensure that panel gaps are within prescribed limits.

During the design and development phase, new models are exhaustively tested not just at Infiniti's Hokkaido proving ground but also at the Tochigi and Motegi test and race complexes in Japan. Infiniti also has a vast 12.34 million square metre hot weather testing base in Arizona.

Testing every Infiniti in the harshest of conditions and over thousands and thousands of kilometres ensures the durability and peace of mind that buyers can expect from the products.