"A concept car like the POP could only have come from us," explains Gregory Guillaume, Kia Europe's Chief Designer, sat in a darkened auditorium on the sixth floor of the firm's Frankfurt headquarters.  "Designers from other companies regularly approach me at motor shows and say ‘I would never even be allowed to try and pull that one off' and it's great to be in a position to operate with such freedom."

On the wall in front of them a life-sized, 3D projection of Kia's next stunning electric show car rotates through 360 degrees and flips between cutaway, exterior and interior views.  (The vehicle itself is still being built in a top-secret Paris facility).  "The POP fits in perfectly with our ‘challenger brand' ethos," Guillaume continues, while motioning towards the car, currently displayed in side profile.  "We're trying to stir things up in the automotive world, to surprise people even more." 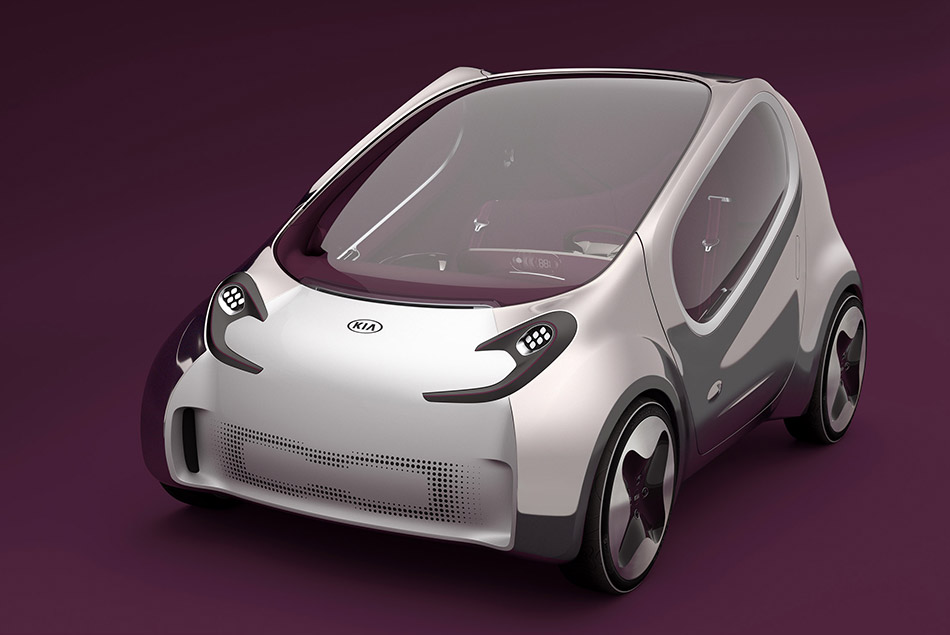 You can see what he means.  After all, have you ever seen a chrome-coloured, three-metre-long three-seater with an electric drivetrain, oblong-shaped side windows and front-hinged doors before?  Thought not.  Compared to electric-car concepts that have gone before, the POP does indeed appear to start from a very different place.

"We wanted this car to act as a loose nucleus, a wild atom."  Guillaume's fervent flow is momentarily interrupted by Schreyer.  "The POP doesn't point at the style of the next generation of cars, but looks even further into the future.  There are a lot of new things, for example the side-window graphic is like a signature, unique with its own character."

There certainly is something unique and unconventional about the POP.  The striking side-window design, the high-tech feel of the dot-pattern grille and taillights, the full-length glass roof, and the simplistic, clean look of the wheels – all point to inspiration derived from outside the usual automotive spheres.

"Many of the things that influenced this design were non-automotive," Guillaume explains.  "We were looking at lightweight, aerodynamic things, such as gliders and high-speed bicycles.  We realised that the automotive world wasn't inspiring us to achieve what we wanted to achieve."

The Frenchman then enthusiastically describes how the heads of the front passengers are perfectly positioned at the centre of the windows' top ellipses; how at night the grille allows Kia's trademark ‘tiger nose' to illuminate the darkness; and how the protrusions at the bottom corners of the doors are actually rear-view cameras that relay images to small screens in the cabin.

Next the projectionist hits a button and opens one of the front-hinged doors on the virtual POP to reveal the most remarkable interior.  "The inside and outside were always designed together.  From the start we looked at the seating on that very short footprint and tried to ensure that passengers would have a perfect view, just like in a helicopter," continues the increasingly passionate Guillaume.

"The seats are designed to be non-automotive.  They're very pure, very simple, almost furniture-like.  The front bench is sculpted, with interesting, flowing lines and, because it's an electric car without a conventional engine, we were able to push the firewall far forward," he explains.

The rear seat is positioned at an offset angle facing out from the rear passenger side across the cabin to the driver-side A pillar.  It's a two-part affair with a base that flips up when not in use and a back and headrest integrated into the headlining.  The resultant legroom is quite remarkable in a 1,740mm-wide car with a wheelbase of just 2,055mm.

And what about the purple colour scheme?  "We wanted just one colour in order to create a calm and peaceful environment," explains Guillaume.  "There's such a clean feel inside.  When we were working on it, we came across an image of a space ship cabin and it was so clean and capsule-like – like a cocoon – that was a big influence."

On the subject of space travel, the POP has two more interior features that wouldn't look out of place on the bridge of the Starship Enterprise.  On a small piece of plexi-glass in front of the steering wheel sits an Transparent Organic LED (TOLED) display that shows a speedometer, battery charge gauge and the other main readouts when the car is running, but is otherwise totally transparent.

"We thought that there was a lot that could be done with the driver's main points of contact with the car – a chance to be visionary.  The TOLED has many advantages over the current generation of head-up displays, principally that it doesn't require a projector that takes up space and weighs a lot.  This, we believe, is the future."

Guillaume then points towards the right of the steering wheel, to the sculpted, chrome-look instrument panel.  Housed therein is a truly revolutionary approach to secondary control displays.  "You get so used to designers trying to make things look overly ‘techy', with lots of buttons and switches.  But in the POP there is only one button.  Everything else (audio, sat-nav, climate control, etc) is controlled via the animated touch screen.  The dot animation creates a warm feel for the driver," he explains.

Thanks to its striking overall look and intriguing individual features, it's easy to forget that the POP is also in fact a fully-electric, zero-emissions vehicle with a 50kW, 190Nm motor and a single-charge range of 160km.  It's powered by highly efficient, compact lithium polymer gel batteries and is fully rechargeable in just six hours.

Guillaume pauses for a second, staring intently at the 3D image in front of him.  "You know, I have this vision in my head of a POP sat at the lights at a busy Paris intersection with all these Vespa riders waiting alongside, noisily revving their engines.  Then, when the lights go green, the POP just serenely moves off without a sound."

You could argue Guillaume might be a little biased in his choice of city backdrop for this evocative slice of imagery.  However, the chic, stylistic POP does have something distinctly ‘Paris' about it.  Fitting, given where it was built and where it's making its international debut.  From the designer-furniture-style seats to the tri-colour exterior one has no trouble envisaging hundreds of POPs driven by fashion-conscious urbanites darting around the French capital's trendy boulevards and avenues.