Club sport – This term is music to the ears of ambitious athletic drivers. The aim of Club sport Racing is to achieve sound racing times with its private vehicle while driving on a race course such as the Nürburgring Nordschleife or the Bilster Berg and in the process, travel there and back on its own axle.

The BMW specialists of Manhart Performance from Wuppertal henceforth offer such a coveted track tool for Club sport. The brand new BMW M235i Coupé, which stands out for a 326 horse power-strong serial six-cylinder turbo engine that is tightly bound to the accelerator ex-works, a maximum torque of 450 Nm as well as the typically firm BMW driving behavior serves as a basis. The Manhart MH2 Clubsport was developed in Wuppertal from the depth of the company's own bag of tricks. 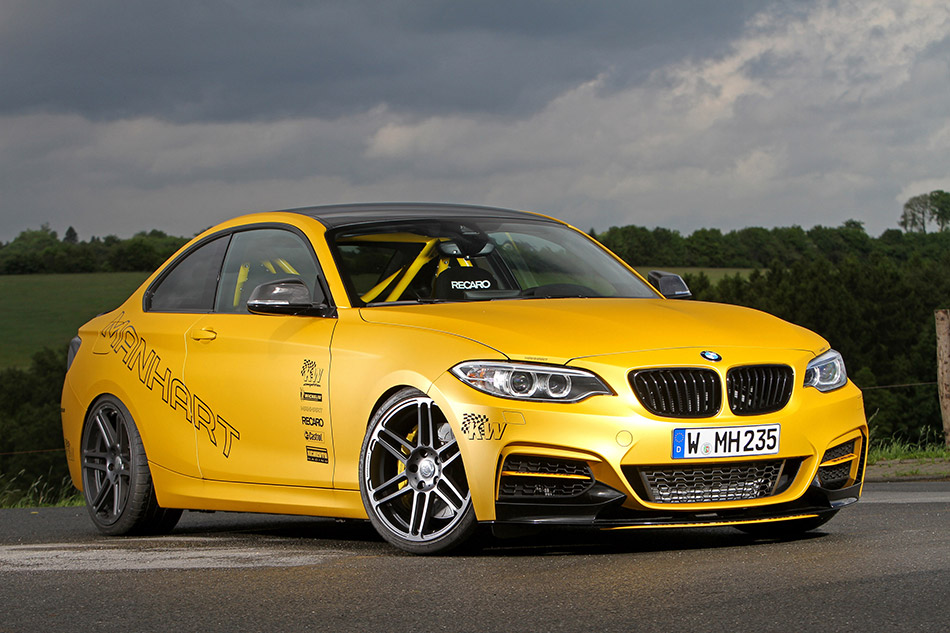 Club sport however also means the automatic forfeiture of comfort and suitability for daily use. The interior of MH2 Clubsport is thus presented with the colorfast Recaro Pole Position full-shell seat with the 4-point suspender belts. To keep the weight in check, the technicians of Manhart removed the complete rear bench seat including the belts. In their stead, a Club sport bracket with a double cross that was mounted in a complex process, H-route and gusset plates were introduced. Of course, the rear area has no naked metal plate: It was covered in soft rug lining. The driver's space is decorated with a special handbrake handle, a gear lever knob and an aluminum pedal lining from the BMW Performance program. One technical highlight for every ambitious athlete of Club sport is offered by an additional display that is installed in the center console in place of the left ventilation nozzle. Here, the driver is not only able to call up all important engine parameters such as charging air pressure, oil pressure, intake temperature, oil temperature etc. through a pushbutton on the multi-function steering wheel but also activate the stopwatch for the 1/4 mile or the circuit.

Important for optimal lap times is of course, performance. To have it move forward more speedily, the technical department of Manhart Performance endowed the serial six-cylinder turbo engine with performance boost using an additional process control system. Parallel to this, there was a bigger charging air intercooler for better cooling and a special sport exhaust system with Manhart downpipe and 200-cell sports catalyzers. All-in-all, the MH2 is now dragged by almost 430 horse power and a maximum torque of 592 Nm on the drive shafts. Since Manhart Performance eliminated the factory-fitted Vmax block completely, the MH2 Club sport also moves beyond the 300 k.p.h. sonic barrier on demand.

While running freely, the fast coupé puffs and blows its quality exhaust gases through the company's own axle back exhaust with two round 90-millimeter stainless steel tailpipes. In the export version, this exhaust variation stands out for its sound background that is almost brutish for a turbo engine, and would certainly even be desired by the current formula 1. Moreover, Manhart Performance also installed a reinforced sports clutch that is also capable of standing the herculean strength of the performance-boosted turbo engine and transmits it to the manual 6-speed gear mechanism.

A perfectly aligned chassis is the second trump card for a species-appropriate application on the race circuit. Here, Manhart Performance relies on the experience of KW and counts on the 3-fold adjustable Club sport coilover kit including support bearings and its own alignment for the MH2 Clubsport. Moreover, there is also a 0-100% differential lock on demand.

Contact with the road surface is assumed by the company's own Manhart Concave One rims of 8.5x19 inches with 225/35ZR19 in front and 9.5x19 inches with 255/30ZR19 Michelin Pilot Super Sport tires in the rear. Wherever there is a race, there is braking too: For racing operation, Manhart has swapped the serial system on the front axle with the 6-piston fixed calipers with disks of size 350x34 mm and Pagid sports brake pads and steel flex lines. There are also Pagid brake pads and steel flex lines on the rear axle.

As in the interior values, Manhart also relies strongly on full-blooded sportiness for the external shell of MH2 Clubsport. The additional aerodynamic mini-helpers such as the front spoiler, rear diffuser and the rear spoiler are all taken from the exclusive BMW Performance program and are largely made up of carbon. Carbon mirror covers and the dull-yellow special wrap, through which all carbon parts are better accentuated do not make the car faster but certainly make it beautiful.