MANSORY puts the crown on the CARBONADO and takes off the roof. In the same Coupé lavishly dressed in carbon fibre based on the Lamborghini LP700-4 Aventador the luxury refiner now also presents the Roadster - and the CARBONADO APERTOS  will only be available exactly three times more often.

Which three customers are awarded the honour will be a tough decision. The demand will certainly be very strong, the CARBONADO APERTOS  is a genuine MANSORY though. Because where Lamborghini thought they had built with a surplus of carbon, the manufacturer shines with its core competence. There is no company name on the market that has such a close connection with carbon as that of MANSORY. In in-house autoclaves the specialists manufacture and process the ultra-light and high-strength material from the world of motor racing and are therefore not dependent on suppliers. This gives absolute freedom in scope, design, fit and individualisation. 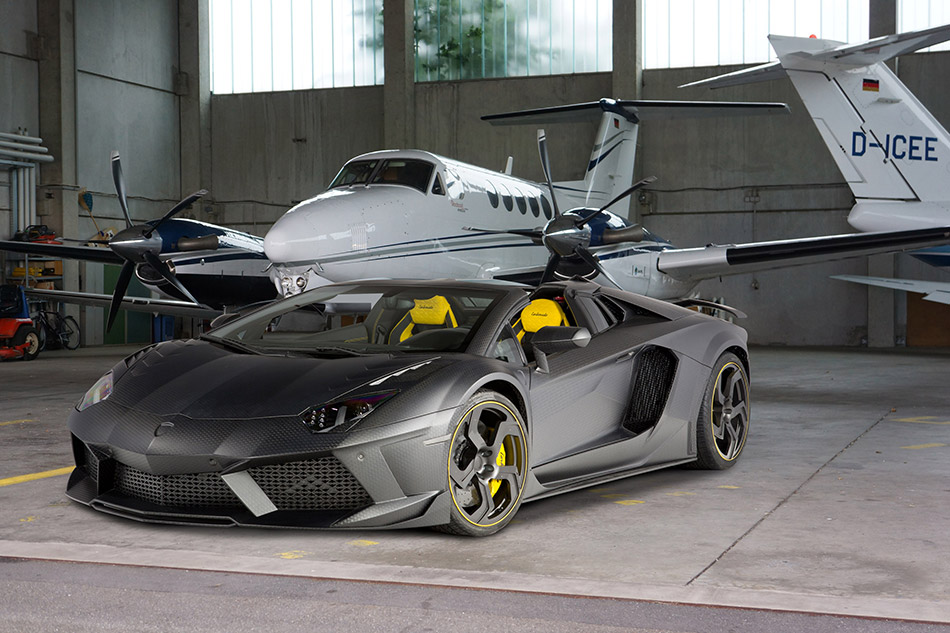 Best proof of this is the completely redesigned bodywork made from carbon fibre in the world-exclusive Stealth Look. The conceived reliance on the shape of stealth aircraft find its full expression at MANSORY, when the specialist gifts the Lamborghini Aventador LP700-4 Roadster a unique design with an appropriate stealth carbon texture. In addition to the optics the technology also reaches new highlights, for example, the striking air intakes optimize the new front spoiler for the flow of fresh air to the radiator. Together with the specially designed front lip there is also an improved downforce for more traction in the marginal area. Unlike the stealth shape of the carbon the completely newly developed daytime running lights can be clearly seen even from a distance.

On the sides the striking side skirts and the larger wheel arches demonstrate the hand of the house of MANSORY. At the front the body has grown by 40 at the rear even by an impressive 50 millimetres in width. Also here looks and functionality go hand in hand. Because the new carbon components not only look diabolically good, they also act as air controller and even feed fresh air both to the unit under the new full carbon bonnet as well as to the rear braking system. The newly developed diffuser and the striking rear spoiler are responsible for perfect routing effect of the air flow underneath the vehicle.

All of these technical improvements are necessary because the CARBONADO APERTOS  significantly exceeds the performance figures of the series Aventador. MANSORY has namely rebuilt the V-engine with its 6.5 litres of displacement. Pistons, connecting rods, rod bearings, crankshaft, cranks and the entire cylinder head were replaced by the team of Kourosh Mansory with full-fledged motorsport components and at the same time two original MANSORY turbochargers were installed. In addition the CARBONADO APERTOS  also received a completely new custom exhaust system from the engine to the stainless steel tail pipes on the rear. The result of this extensive rebuilding process is a boost in performance, which even the most demanding connoisseurs had not expected: from 700 hp (515 kW) MANSORY pushes the power output to a peak of an incredible 1,250 hp (920 kW). The maximum torque had to be electronically limited to 900 Newton metres by the engineering department. The all-wheel-drive sports car doesn't need more than 2.6 seconds to sprint from zero to 100 km/h and only stops accelerating at 380 km/h.

In order to transfer this power of the completely reworked twelve-cylinder engine onto the asphalt, MANSORY only relies on forged light-alloy wheels in 9x20 and 13x21 inch size with carbon inlays and the ultra high-performance Pirelli P ZERO tyres in sizes 255/30ZR20 at the front and 345/23ZR21 at the rear.

As if the refinement needed additional features, the upholstery has also continued in the cockpit. As with the aerodynamic components, the performance gains, and the wheels MANSORY only thinks in superlatives when it comes to interior refinements. The leather alone combines the properties which would otherwise involve compromises, but it is extremely durable and yet supple as a real leather glove. The covered seats and the instrument panel harmonise perfectly with the new sports airbag steering wheel, the aluminium pedals with the knobs and the numerous carbon fittings.

The transformation of the closed Aventador to MANSORY CARBONADO Coupé will only appear in an extremely limited edition of only six. The CARBONADO APERTOS  is therefore twice as exclusive.