The MX-5 Super25 dives deeper into the spirit of Mazda's motorsports DNA and goes beyond the short-track prowess of the Super20, the previous MX-5 concept vehicle built for SEMA.  Unlike its predecessor – which was loud, proud and boisterous with its bursts of supercharged energy – the Super25 was crafted with endurance racing in mind.

Known for its commanding number of grassroots motorsports racers, the MX-5 Miata is the epitome of a light and limber sports car that won't burn a hole through an enthusiast's pocket.  With such a dependable starting point from which to build, the MX-5 was an optimal choice for creating a concept with the ability to handle such long-distance, weary-heavy racing.  Outfitted with a multitude of racing-inspired exterior features coupled with Mazda Design-created interior touches, the Super25 is labeled with the quick-to-motivate "55" racing number.  A significant figure in the history of Mazda Motorsports, the distinction is a tribute to the brand's historic 1991 24 Hours of Le Mans win that made Mazda the first (and still the only) Japanese manufacturer to ever be named champion. 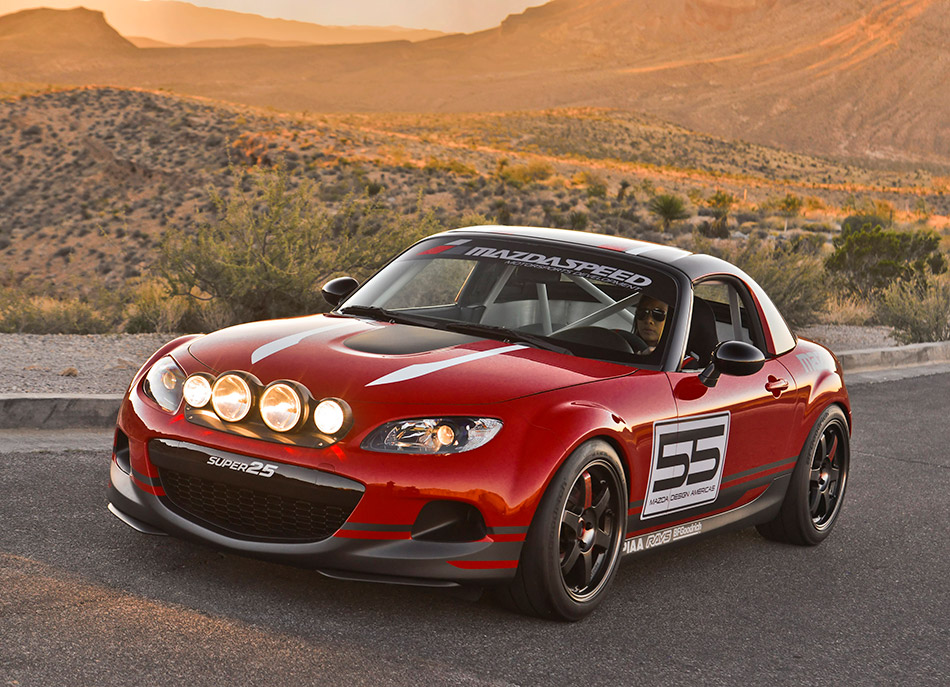 The Super25 features the bold yet refined core colors of MAZDASPEED Motorsports Development – black, gray and red.  Covered in a commanding Super Red gloss, Brilliant White appears as minimal character details along the hood with a matte Black Mica finish dressing the lower portions of the vehicle from the front and rear fascia as well as along the side skirts.  The black, red and white pattern continues onto the glossy black surface of the sports car's fixed hard top with Brilliant White stripes remaining extending through onto the trunk lid.  A customized four-lamp lighting pod is embedded just above the modified grille and is equipped with bright-for-the-night (and day) PIAA 40 Series halogens on the inside flanked by 510 Super White Driving halogens on the outside.  Super25 looks handsomely poised on 17-inch Volk Racing T37 six-spoke matte black wheels suited in BFGoodrich g-Force™ R1™ 225/45ZR17 tires.

Mazda North American Operations is headquartered in Irvine, Calif., and oversees the sales, marketing, parts and customer service support of Mazda vehicles in the United States and Mexico through nearly 700 dealers.  Operations in Mexico are managed by Mazda Motor de Mexico in Mexico City.