One look at Mazda's new generation models - the Mazda CX-5, Mazda6 and Mazda3 - will confirm that the KODO design is defined by a dynamic, living expression of motion. In the Mazda Hazumi the essence of KODO has been captured in a compact body without losing an ounce of impact. A newly developed 1.5-litre SKYACTIV-D clean diesel engine promises outstanding fuel economy without compromising powerful, linear performance. In addition to enhancing safety fundamentals such as driving position and field of view, Hazumi adopts Mazda's cutting-edge range of i-ACTIVSENSE safety features. Meanwhile, MZD Connect offers drivers the fun and convenience of smartphone connectivity in a format that is safe and appropriate for in-vehicle use. Refusing to bow to the conventions of the subcompact class and refusing to compromise in any of the four key areas of Mazda's vehicle engineering, the Mazda Hazumi points the way for Mazda's next-generation subcompact.

The concept's name is a good fit both for the look of the car and its target market. Hazumi is a Japanese word meaning to "bound" or "spring up" and was chosen to convey an image of a small but vigorous animal, bursting with energy. It also describes potential B-segment buyers: young, dynamic, vibrant and ambitious. 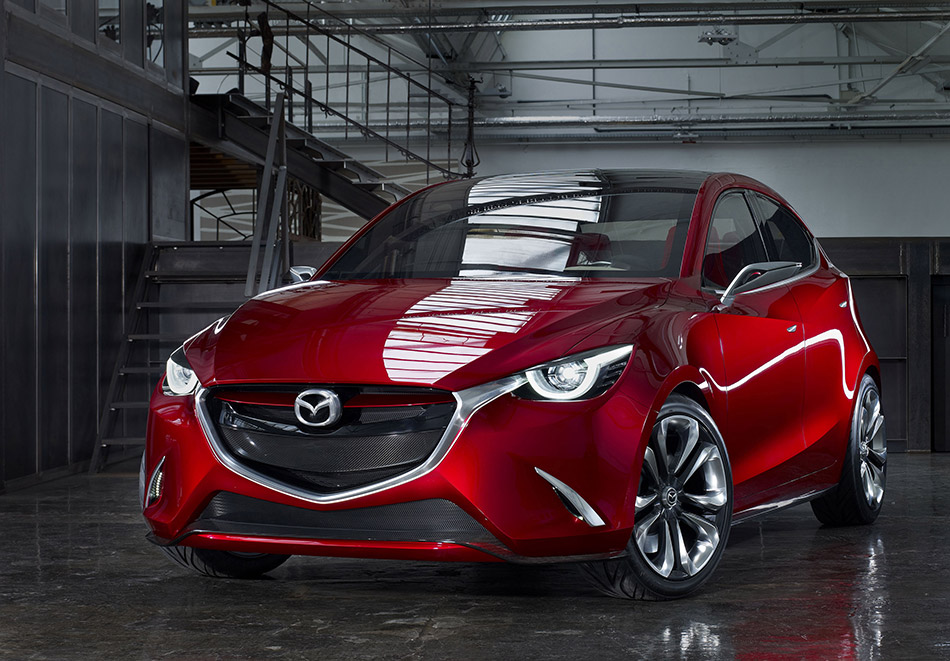 The Hazumi is yet another example of KODO's vast potential and how well it adapts to different vehicles of different sizes. "Whereas with longer models such as the SHINARI we use long and free lines of motion stretching from front to back to express KODO, with Hazumi we've created a form which suggests explosive motion," says Hazumi chief designer Ryo Yanagisawa. "It's like an animal poised to pounce.

Every muscle is held tense as it gathers energy for the chase. Despite being small, KODO gives the car a presence that can't be ignored, and a shape that has driving pleasure written all over it."

The KODO design seeks to capture the fleeting tension, beauty and power of living creatures in motion. By packing the powerful and dynamic movements of KODO into a compact five-door hatchback, Mazda has given the Hazumi distinctive exterior styling and an athletic physique made for the road. This is KODO in its most highly concentrated form yet.

Drawing the compact cabin as far to the rear as possible places the centre of gravity near the rear wheels. It creates a wedge shaped body starting from the low and pronounced nose and rising toward the rear to impart a strong sense of forward motion. The sharp, chiseled silhouette is a clear departure from mainstream subcompact design where "one-motion form" styles prevail. The short overhangs and powerful fenders that bulge over the imposingly large wheels underline the car's strong and athletic stance.

But it is not all about looks. As with all its new-generation products, Mazda has put a big focus on aerodynamics, optimising the airflow over the upper body and creating a turbulence-rectifying under-floor structure. Tuned specifically for the compactness of the car, these elements deliver superb aerodynamics.

The headlamps and grille are positioned low to the ground as possible, giving the front face a sharp look reminiscent of a cheetah on the prowl. Yet the car somehow manages to be cute at the same time, ensuring onlookers will soon feel a sense of affection. The LED guiding rings add depth and solidity to the headlamps, evoking the strong-willed eyes of an untamed animal. Another KODO trademark, the aluminium signature wing, underscores the grille before cutting through the headlamps, imparting a deeply sculptured facial expression.

With its short overhangs and pillars that look ready to pierce the centre of the front and rear tires, the Hazumi displays the athletic silhouette of a sports car when viewed from the side. A long line starts from the bonnet, crests over the front wheel and runs all the way to the rear, while an overlapping line peaks over the rear wheel, emulating a rhythm of flexing muscles and adding to the strong sense of forward motion. The surface textures of the body are rich with tension, accentuating the car's big-boned physique.

The firmly planted rear wheels support the high hipline and, together with the steeply inclined back window, create a strong sense of forward motion. The distinctive oblong rear combination lamps convey speed while possessing the piercing vitality of the headlamps.

The aluminium wheels feature a dynamic design expressing a powerful force radiating from the centre of each wheel. The contrast between the radiant sheen produced by the aluminium milling process and the dark metallic paint give a taut, three-dimensional feel.

The interior of the Hazumi imparts the same dynamic sense of speed as the SHINARI, MINAGI and TAKERI concept cars that preceded it, maintaining superb functionality as an interface between car and driver. The high-quality feel of the interior exceeds the standards of the segment, but also gives a light and youthful impression that befits a subcompact model.

Speed is at the essence of the interior shapes, which spread out from above the instrument cluster to the door trim and centre console. The effect, similar to the exterior, is a dynamic sense of forward motion. The passenger space begins immediately with an instrument panel shaped like the wing of an airplane, creating a comfortable feeling of openness. The centre console is suspended like a bridge, enhancing the feeling of space and creating more room in the foot wells.

The instrument cluster is designed around the driver's centre axis. It features a single, centrally-positioned gauge with displays spreading like wings on either side. The layout of the centre display, Active Driving Display, and commander control, is based on Mazda's unique human machine interface (HMI) concept called the Heads-Up Cockpit. It is designed to help drivers deal with large amounts of information while keeping their eyes on the road ahead and maintaining a safe and stable body position.

In every area, the high quality forms have a sculptured appearance amplified by reflections of light and shadow. The material for each was crafted to optimise its appearance. Key components of the interior such as controls and displays use a layered combination of hard chiseled metal and deep acrylic material. This produces a light and playful impression befitting a subcompact car, while maintaining a high-quality atmosphere.

The interior is designed with black leather as the base and white leather used in certain places such as the instrument panel. A Crimson-coloured material with a nubuck feel is used on the seats. This modern colour-coordination, which is both bold and charming, makes the interior look youthful and refined at the same time.

The Mazda Hazumi offers the full suite of SKYACTIV Technology, optimally tuned for a subcompact car. It delivers the agile driving one would expect from a supermini with linear performance that provides a sense of security.

The Mazda Hazumi also marks the world premiere of the SKYACTIV-D 1.5. This compact and lightweight clean diesel engine is designed for ultra-efficient interal combustion just like the bigger SKYACTIV-D 2.2. It offers ample torque and dynamic performance that is linear right up to the redline, as well as excellent CO2 emissions under 90 g/km with the Mazda Hazumi. It will also fulfill stringent Euro 6 requirements without after treatment systems like an NOx trap or selective catalytic reduction.

This model features i-ACTIVSENSE advanced safety technologies based on Mazda Proactive Safety. This is Mazda's safety philosophy aiming to maximise the range of conditions in which the driver can drive safely and minimise the risks that lead to accidents. These technologies will help drivers enjoy the Mazda Hazumi safely and with peace of mind.

Young people crave stimulating experiences and want to share them with their friends as soon as possible. Mazda addresses the needs of these young drivers - or anyone for that matter who wants to stay connected at all times - with MZD Connect, a new connectivity system introduced with the all-new Mazda3. In combination with the Heads-Up Cockpit, MZD Connect is designed to allow drivers to access the fun and convenience of their smartphones in a safe and easy-to-use format while behind the wheel.