With its uncommon yet contemporary styling, available technologically-advanced Super All-Wheel Control (S-AWC) all-wheel drive system for exceptional off-road capability and on-road traction and spacious seating for up to 7 passengers, the Mitsubishi Outlander mid-size crossover utility vehicle (CUV) has been an excellent choice for the North American automotive consumer searching for an affordably-priced versatile and roomy crossover.

This second-generation Mitsubishi Outlander will conclude its highly successful run with the 2013 model year, making way for an all-new third-generation Outlander model that will debut in North America next year as a 2014 model crossover. 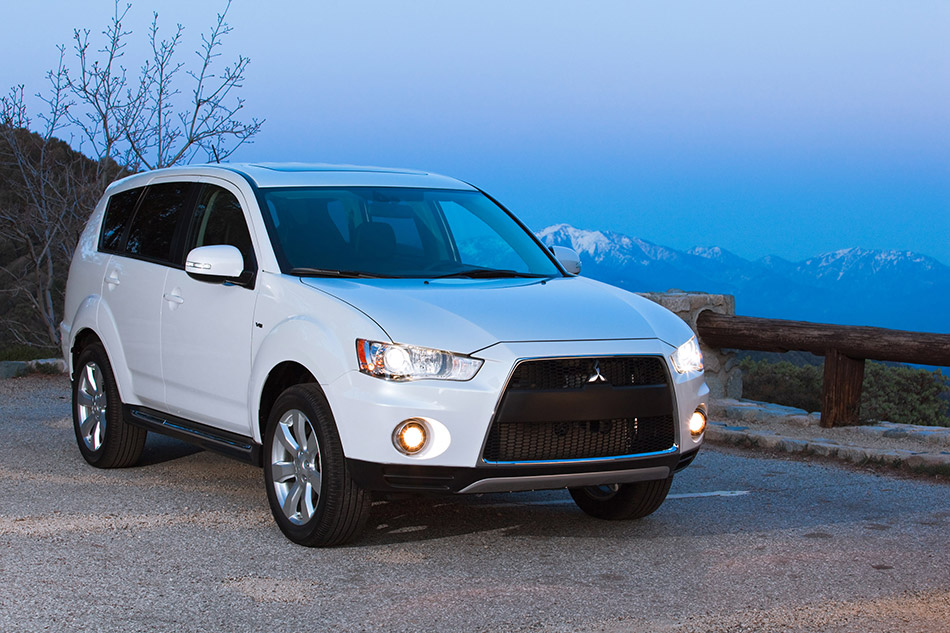 Heated Outside Mirrors (All Vehicles)
This welcome luxury convenience feature is included at no cost to the consumer on every 2013 Mitsubishi Outlander.

Expanded Available Equipment Thanks to New Options Packages for 2013

Numerous new options packages are available for the 2013 Mitsubishi Outlander including an All Weather Package with remote engine start, all weather floor mats (4) and front and rear mudguards; the Entertainment Package consisting of a rear seat DVD player, multi-function remote control and infrared wireless headphone (1); an eye-catching Exterior Package that features a large rear spoiler and "GT" side sill graphic; and a convenient Towing Package made up of a sturdy tow hitch and trailer tow wiring harness.

Every 2013 Mitsubishi Outlander mid-size crossover utility vehicle (CUV) is equipped with a wide array of technologically advanced safety features to further aid this well-composed vehicle in such key areas as handling, stability, traction and safety.

All 2013 Outlander models have an exceptionally sturdy all-aluminum roof structure that helps in reducing the vehicle's overall weight while having the added benefit of lowering the vehicle's center of gravity as well. Not only does this thoughtful design feature help improve vehicle stability, it also aids fuel efficiency.

Fold-flat 2nd and 3rd row seating (Outlander SE and GT models) and a uniquely-designed flap-folding tailgate that provides maximum ease of placement or access to goods from the rear cargo area are other key design features that have helped make the versatile Outlander mid-size crossover a popular vehicle choice among consumers.

Another important engineering safety feature incorporated into the design of the 2013 Outlander crossover is Mitsubishi's Reinforced Impact Safety Evolution (RISE) technology. This patented body construction system helps to provide additional protection to the vehicle's occupants by dissipating and/or absorbing energy in the event of a collision. 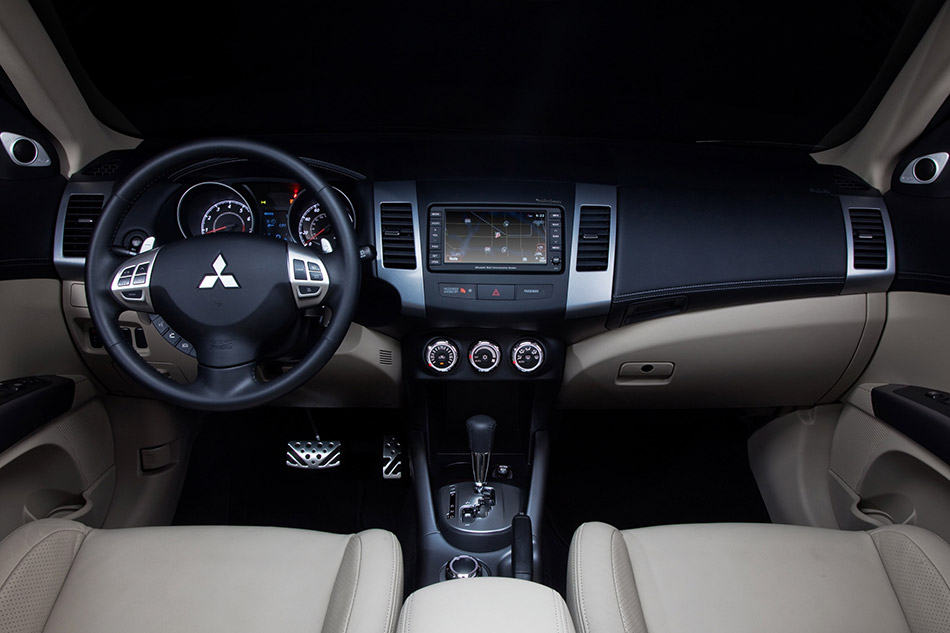 Demonstrating the 2013 Mitsubishi Outlander's versatility to the consumer are a pair of very capable and efficient 4- and 6-cylinder engine configurations to choose from.

Available on both the ES and SE Outlander models, the DOHC 16-valve 2.4-liter normally-aspirated inline-4-cylinder engine includes an aluminum block and head and Mitsubishi Innovative Valve-timing Electronic Control (MIVEC) variable valve-timing. The latter design element greatly aids in increasing power while simultaneously reducing harmful exhaust emissions. This hearty power unit possesses a bore and stroke that measures 88.0 x 97.0 mm, respectively, while its compression ratio is 10.5:1. Power is rated at 168 horsepower at 6,000 rpm and a beneficial 167 lb.-ft. of torque at 4,100 rpm while running on regular unleaded-grade fuel – a welcome feature to the consumer in this era of high fuel prices.

An advanced, fuel-efficient continuously-variable transmission (CVT) is mated to the 4-cylinder power plant of both the 2013 Outlander ES and SE models, the combination delivering a vehicle tow rating of 1,500 lbs for weekend warriors to haul a pair of personal watercraft, dirt bikes or even a tent trailer. Providing the driver the performance of manual gear selection, a high-tech Sportronic® continuously-variable transmission (CVT) includes sporty steering wheel-mounted paddle shifters (standard on the 2013 Outlander SE model).

With a full 230 horsepower at 6,250 rpm and 215 lb.-ft. of torque on tap at only 3,750 rpm, the SOHC 3.0-liter V-6 engine packs a powerful punch, whether accelerating on a freeway onramp or traversing a steep mountain grade. And with a maximum towing capacity of a stout 3,500 lbs., the engine found beneath the hood of the top of the line 2013 Outlander GT provides well over double the tow rating of its sibling's 2.4-liter inline-4-cylinder engine.

Though powerful, this V-6 unit boasts savvy engineering like that of its smaller cousin, including strong and lightweight aluminum-alloy composition in the engine block and the cylinder heads, MIVEC variable valve-timing technology for maximum power and fuel efficiency and a lofty compression ratio of 10.5:1. Bore and stroke for this engine measure 87.6 x 82.9 mm, respectively.

Another clever design feature is the implementation of Mitsubishi's Idle-Neutral Logic that automatically switches the car into neutral whenever the car comes to a stop to lessen fuel consumption.

Delivering this power to the driven wheels (the 2013 Outlander GT is available in either 2-wheel or all-wheel drive) is a silky smooth yet remarkably responsive 6-speed Sportronic® automatic transmission that features paddle-shifters located behind the steering wheel for driver initiated gear selection.