As a matter of fact, the green hell has some magic attractive power for every ambitious car driver putting highest requirements as to the pilots, so also to the involved vehicles. That's why it is no wonder that there are cars being tuned especially for track day events. Exactly against this background, the specialized in fields of power improvement company MCCHIP DKR at Mechernich, Germany, has modified a Porsche 997 Turbo S. 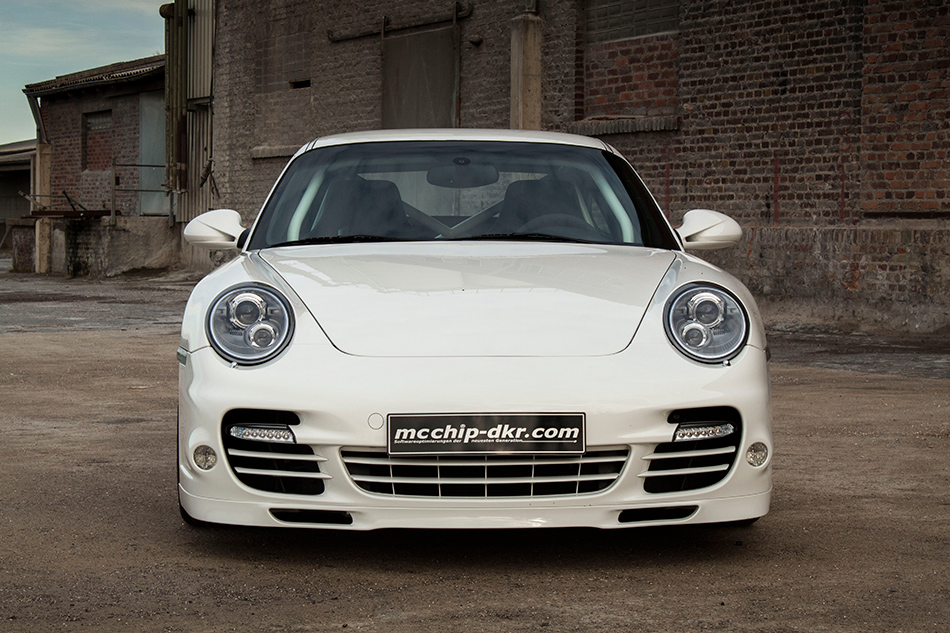 And so, the initial point is a 6th generation nine-eleven 2012 model with 3.8 Turbo DFI engine, that has been re-equipped by round lamps thus more remembering the 1963 (!) original 911, than the 996 ancestor did. Thanks to the MCCHIP DKR Stage-3-Kit, the serial 530 HP (390 kW) with 700 Nm of max torque are being enhanced by a modified engine management with software adaptation, an exhaust system with sports cats and header designed by Michael SCHNARR from the CARGRAPHIC company Landau, Germany, meanwhile up to 600 HP (441 kW) with 815 Nm of max torque and mighty sound. The price for this package of tuning measures goes up to 8,499 Euro.

Because of safety reasons, the Porsche has been equipped by a HEGEMANN rollover cage. In this context it seems to be useful to report on the fact that the sliding roof has been exchanged against carbon top. In order to still more to reduce car weight, the rear window has been made out of Makrolon ®. Concerning the chassis, the PASM coilovers from the Bilstein company merit special reference, even so the splendid wheel-tire-combination, consisting of original Porsche 997 GT2 RS rims with Michelin Cup tires.

The seats in the inner of the bolide been changed by MCCHIP DKR against an elaborate mix of alcantara and leather upholstered Recaro SPG shell type racing seats. Finally may be mentioned the fact that many car pieces are painted in the color of the car. And who listens now attentively will note: The call of the green hell is becoming louder and louder …