‘With this model Germany's automotive manufacturing industry regained its place at the forefront of the special segment, which had actually always been Germany's domain right from the beginnings of automotive engineering – coupled with the name Mercedes-Benz. One can safely assume that it is precisely those circles which always consider that only the very latest in excellence are just about sufficient for their requirements will focus their interest on this model.' That was the conclusion drawn by the editor of the renowned ‘Allgemeine Automobil-Zeitung' (AAZ) in 1930 about the ‘Super Mercedes' unveiled at the Paris Motor Show. This was the official name of the Mercedes-Benz Model 770. 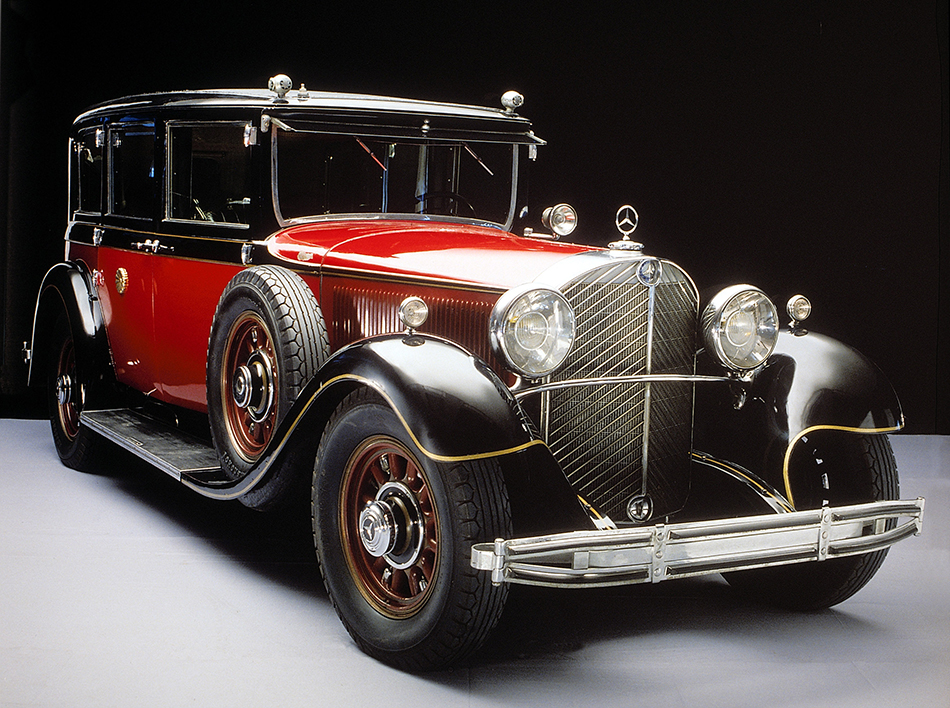 Around the end of the 1920s, the time was ripe for Mercedes-Benz to set a new landmark in the premium car segment. The Model 630 was no longer in keeping with the times, and Daimler-Benz was in danger of losing its standing in the top car class in view of the Maybach 12 model with a V12 engine (7-litre displacement, 150 hp/110 kW) which was brought out at the end of 1929 by its competitor Maybach, and the Zeppelin 8 model presented at the Paris Show a year later (8-litre displacement, 200 hp/147 kW). However, because of the brand's reputation and also its recent in-house experience, Daimler-Benz was very careful when it came to new technical features. In 1932, the specialist publication ‘Motor und Sport' reported on this matter on the occasion of the ‘Super Mercedes' test:

‘In contrast to the American view, which is in favour of the V-engine of the 12- or 16-cylinder type as far as representatives of this price category are concerned, they have remained remarkably sober in giving the Super Mercedes an eight-cylinder in-line engine. With a vehicle whose fundamental tendency is towards exclusivity to such a great extent they thought that any excursion into uncharted waters would be fatal. That is how the new design from Daimler-Benz came to be a happy avowal of traditional links.'

It is true that from a technical point of view, the ‘Super Mercedes' – known internally as W 07 – did not constitute a great leap forward into the realm of new technologies. There was certainly much expecta­tion amongst the general public surrounding the Mercedes-Benz 170 (W 15) which came out a year later in 1931, with its advanced chassis including independent suspension. But despite its conserva­tive chassis design with front and rear rigid axles, the new top model surprised people with its clear handling as a result of skilful suspension tuning. ‘Motor und Sport' proves revealing here, too:

‘The Super Mercedes is certainly a fast car. With its saloon body it achieves a speed of 150 km/h. This kind of output is seen as racing-driver speed in many circles.

We know of vehicles, even more recent ones, in which it would be reckless to drive at over 70 km/h, whereas there is no such limit where the Super Mercedes is concerned. In contrast to some statements made by the competition which have come to light, the conduct of the Super Mercedes at all speeds is beyond reproach. Whilst the car's springing is not as sensitive as it is amongst the American competitors, the Super Mercedes enables a sure driving style that secures cohesion with the road. We do not know of any vehicle that would allow such safe driving with heavy bodies at the breathtaking speed of 120 km/h. And this is probably where the ultimate sense and the ultimate justification for the existence of this vehicle model are to be found. In spite of its orthodox fundamental philosophy, the Super Mercedes presents itself as the worthy conclusion of Daimler-Benz production and as the final enhancement of automotive comfort achievable with today's means.'

The criticism of large cars' handling was indeed an issue back then; on another occasion the testers found fault with the handling of the Cadillac V16 and Maybach 12, which were direct competitors of the ‘Super Mercedes': ‘The rather unpleasant lateral swaying of the body would be dealt with by strengthening the slightly soft springs and by tightening the shock absorbers and would then probably cease; however the question remains whether the springing would be sufficient on poor rural roads – which predominate on long journeys – to retain the high average. As is the case with the new twelve-cylinder Maybach, it is very apparent here that future work must concentrate on improving the handling.'

The ‘Super Mercedes' was the last very conservatively characterised new design from the still young Mercedes-Benz brand, which came about in 1926 as a result of the merger of the companies Benz & Cie. and DMG. The expectations that had manifested themselves in society with regard to an exclusive car from this brand turned out to be an advantage for it, its place in automotive society having been carved out by the predecessor models.

The 7.7-litre eight-cylinder unit with its in-line design was a progressive, solid engine when compared with the eight-cylinder variant in the Nürburg model, but it could not be classed as sophisticated when compared with the engine in the forerunner of the Model 630. In comparison with the international competitors, one special feature did remain: the vehicle could be equipped – as an option at that time – with a supercharger which increased the output from 150 hp (110 kW) to 200 hp (147 kW). Another special feature of the W 07 model series was the fact that the car was available without a compressor with a deletion allowance of 3000 Reichsmarks. 13 customers availed themselves of this opportunity. The overhead valves were operated by a low-mounted camshaft via tappets and rocker arms. The cylinder head made of grey cast iron was sealed by an electron valve cover. The engine block of grey cast iron chromium-nickel alloy housed the crankshaft with nine bearings and was closed off at the bottom by an electron sump. The cylinder head contained eight spark plugs for the engine which worked with combined battery and magneto ignition.

For the naturally aspirated and belt-driven supercharger version the mixture was supplied via an updraught twin carburettor with an accelerator pump and choke. When the engine was cold the starting procedure was also made easier by preheating of the intake manifold.

The transmission represented a special feature, as an overdrive could also be selected in addition to the usual three forward gears, making a total of six forward gears available. The overdrive was preselected via a lever on the steering wheel, and activated by briefly decelerating without pressing the clutch. The same method was used for shifting down. Throughout the entire construction period the ‘Super Mercedes' of model series W 07 had the two final-drive ratios i = 4.5 and i = 4.9 at its disposal.

In the case of the early vehicles, lubrication of the chassis was carried out automatically via a central lubrication process which involved the engine oil being pumped out of the sump at the appropriate points of lubrication. On the later models the usual central lubrication employed at Daimler-Benz then was used, whereby every 100 kilometres the tappet of a pump which had to be operated by foot supplied the lubrication points with oil. 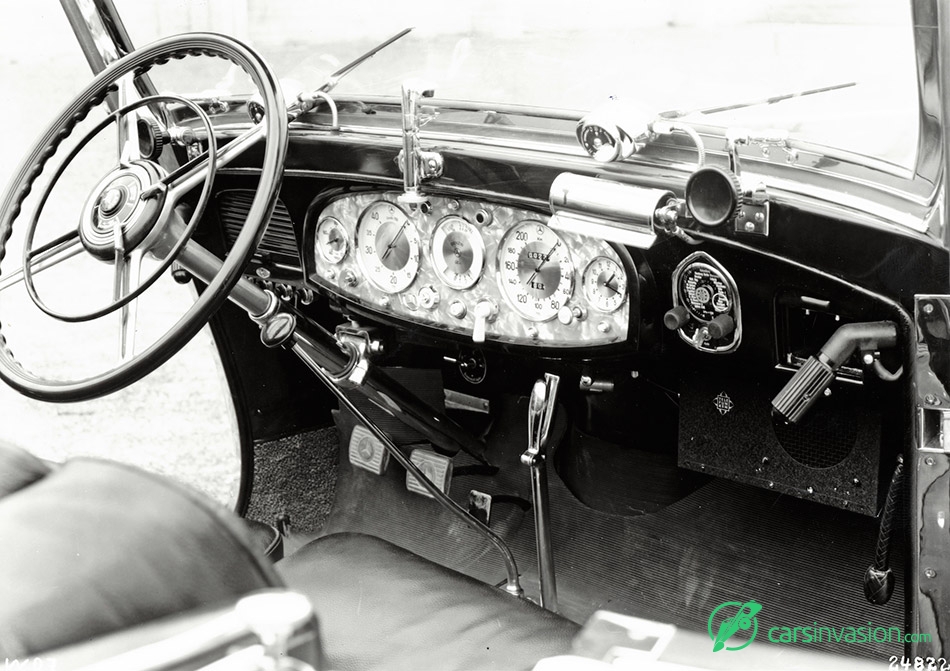 The low-frame chassis offset at the front and rear with cross bracing in the centre consisted of closed U-section steel side members.
The front axle, a rigid axle made of chromium-nickel steel with an H-section and the rear rigid axle were connected with the frame by long semi-elliptic springs and were supported in their springing work by lever-type shock absorbers.

Where the early vehicles were concerned, changing the wheels was a tiresome business: the 2.7-tonne car had to be raised manually using a jack. Later cars offered a built-in hydraulic hoist which raised individual wheels. The wheels used were variously-sized wire spoke wheels or what were known as artillery wheels. The latter were wood spoke wheels which had originally been used for heavy artillery canons. 7.00 x 20 low-pressure tyres, 190 x 20 ‘giant pneumatic tyres' and 8.25 x 17 low-pressure tyres were used.

What was striking during the production period of this ‘Super Mercedes' was the change in body style that took place within this time, which spanned nearly eight years. To start with there were still very sharp-edged bodies with upright windscreens and tail ends without boots, but over the course of time more rounded shapes developed, as did windscreens which were positioned at more of an angle and what were at first boots merely added on, before they were finally integrated into the overall shape. The wheels were also quite isolated, particularly the front wheels, as they were only covered by a curved sheet metal panel serving as a wing. As time went by, the wings too, with their deep aprons and the wheels they housed, could be seen more as an integral part of the overall design and gave the side view of the body a more homogeneous appearance.

It is also interesting to note that the top speed of the final models was raised from 150 km/h to 160 km/h – without increasing the engine output – a modest success achieved by rounder bodies. A special feature in the range of Mercedes-Benz passenger cars was the multifunction steering wheel with five additional functions: these included sounding the horn using the signal ring, turning up and dimming the lights via the button (adorned with the brand emblem featuring the star and laurel wreath) positioned in the centre of the steering wheel, and control of the fuel/air ratio, ignition and overdrive functions which were operated via three levers.

According to the 1931 brochure the range of bodies on offer comprised the Pullman saloon, Cabriolet D, Cabriolet F and open-top touring car.