As early as mid 1933 a more powerful variant with a displacement of 1.5 - 1.6 litres was being considered alongside the Mercedes-Benz 130 model. Six months later the plans became reality when it was decided to give the go-ahead for a 1.6-litre series to follow the 1.3-litre car. Then in February 1936 the Mercedes-Benz 170 H (W 28) made its debut at the International Automobile and Motorcycle Exhibition in Berlin, superseding the 130, along with the 170 V model (W 136) which was built in parallel. This time the "H" for "Heckmotor" (rear engine) was used officially in the model designation, the identification now being necessary in order to distinguish the rear-engine car from the 170 V with identical displacement and front-mounted engine. As with its predecessor, the two-door 170 H came both as a Saloon and Convertible Saloon. 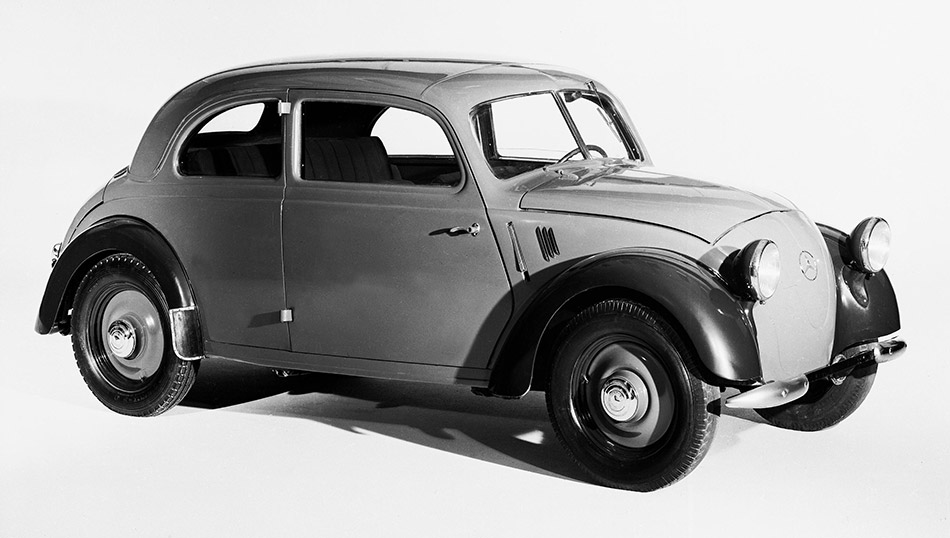 An open-top touring car was not available.

One should explain at this juncture a set of circumstances that applied to both these 170 models – a situation that arose because the two series had been developed as 1.6-litre cars until just before their presentation and were only given the larger displacement immediately prior to production start-up. At a meeting of the Board of Management and directors in March 1935 to discuss the model range and vehicle disposition for the trade fairs in London and Paris in 1935 and Berlin in March 1936, the vehicles from the W 136 series for Berlin were described as having 1.6-litre engines. This resulted in the fact that many of the number groups listed in the vehicle production records, for which chassis had already been reserved, were given a red stamp with the mark "1.6Ltr." Then, following the rapidly modified displacement from 1,598 cubic centimetres to 1,697 cubic centimetres, the first series of the new vehicles were entered on these pages, without any correction being made to the existing stamp mark. In the case of the 170 H this applied to chassis numbers 118771 to 118780 and 136776 to 137775.

The increased displacement, which served above all to generate more torque, was achieved simply by modifying the manufacturing process to increase the bore from 72 millimetres to 73.5 millimetres, and by giving the crankshaft a 98-millimetre stroke instead of one of 100 millimetres. These modifications made no difference to manufacturing costs, particularly as they could be achieved using the same blanks.

The four-cylinder engine of the 170 H model developed an output of 28 kW at 3,400/min giving the car a top speed of 110 km/h. In addition to the body design, the significant factors here were the reduced vehicle weight resulting from the compact drive block and redundant propshaft, combined with reduced power transmission losses. In contrast to the 170 V with its four-speed transmission, the vehicle had a three-speed transmission with selectable overdrive, just like the 130 model, although this was now designated a four-speed transmission. This made no difference to the engine speed range compared with the 170 V model, since the incremental tuning between transmission and axle ratios was such as to make engine speed ranges almost identical to those of the 170 V, despite it having a different transmission design.

The other technological concept of tubular backbone chassis with bifurcated rear frame to accommodate the rear engine was fundamentally identical to that of the 130 model. The underlying tendency to oversteer was present as before, although much reduced as a result of careful chassis tuning. The 170 H differed from the 170 V not only in terms of its avant-garde body; the rear-mounted engine also offered improved performance and reduced engine noise.

Compared with the 130 model, the 170 H had a much more pleasing body form, although in this case the Mercedes star was laid flat on the bonnet and not encircled. The vehicle's appearance remained a topic for discussion when it was unveiled to the public at the IAMA. In its reporting on the exhibition, for example, Motor und Sport wrote: "Has the general public finally grown accustomed to the shape of the rear-engine car or not? We, at any rate, can find nothing wrong with it. It is a modern car of which one can be proud and one which reveals to the world that its owner is a modern person. We liked the new rear engine (car) with its new four-cylinder 1.7 litre engine very much indeed."

Even today one has to agree with this view. The 170 H is pleasing to look at, more so perhaps than the 130, thanks to its rounded, harmoniously integrated design, which even decades later remains attractive and convincing. If one places the 170 V and 170 H side by side, then it is the front-engine car that suddenly appears much more outdated to modern eyes than the astonishingly fresh-looking rear-engine model. In this respect, the body designer Walter Häcker scored a major success, creating a design that can unquestionably stand shoulder to shoulder with any post-war car with a rear-mounted engine. Utterly convincing, too, are the unifying style elements around the windows, the B-pillars and the longitudinal beading, which create a link to other saloon bodies and enable the 170 H to identify itself as a member of the larger Mercedes-Benz family.

Although more compact on the outside, the interior of the 170 H was more spacious than the 170 V. Without an engine bonnet, the driver's view was more reminiscent of that of many modern vehicles. Stowage space for luggage was improved compared with the 130, although this was not without compromises, since baggage had to be lifted over the back of the rear seats in order to place them in the trunk. But this was no different with the equivalent 170 V model – for this class of vehicle a trunk that was accessible from the outside was not introduced until after the Second World War.

The 170 H continues to impress even today's drivers and passengers with its outstanding comfort levels for both suspension and noise and with its standard-fit heating system. On this last feature, the test report of the Allgemeine Automobil-Zeitung (AAZ) observed: "In addition to the car's spaciousness, another very attractive aspect is the adjustable car heating system. Unfortunately, other than the 170 H, only few – mostly foreign – cars are equipped with this pleasing feature."

The heating system was a by-product of the compressed-air cooling system borrowed from the 150 model. This forced air into a small water-cooled radiator by means of a "turbo blower" driven by the engine. Some of this air passed not only over the enclosed exhaust manifold but also over the silencer. This warmed air was then fed into the vehicle interior. It was possible both to regulate the heating system and to turn it on and off.

The 170 H was also faster than its popular brother with front-mounted engine. The response of the trade press was entirely enthusiastic. The magazine Motor und Sport filed an almost euphoric report from the IAMA: "Although the car is considerably more spacious than the 1.3-litre rear-engine car, its wheelbase is just 10 cm longer and it weighs just 30 kg more. The engine has an output of 38 hp, giving a power-to-weight ratio of 27.6 kg/hp. As a result, in addition to its unparalleled reputation for roadholding, Mercedes-Benz has now finally provided a dose of "pep" which will be welcomed by many."

The following year a colleague writing in the AAZ made a similar observation: "The handling of the 170 H is supported by a very acceptable top speed and highly satisfactory acceleration. Top speed over the flying kilometre, recorded as an average of four runs, was 111.4 km/h, while a speed of 70.6 km/h was achieved over one kilometre with a standing start."

Measures to produce a special-purpose version of the 170 H got under way even quicker, the model's chassis being used by Karl Schlör at the Aerodynamic Research Institute Göttingen (AVA) to develop a streamlined body on behalf of the Reich Ministry of Transport. This was custom-built by the coachbuilding firm of Gebr. Ludewig in Essen. This prototype vehicle achieved a top speed of 146 km/h on the Frankfurt – Darmstadt autobahn, over an average of three timed runs. At the 1939 IAMA the car, which had the unusual feature of a centrally-positioned driver's seat, was available for test drives by anyone interested from the motor industry.

The 170 H model was also given a facelift. From 1938 onwards it was equipped with dual-look bumpers, and the instrument panel additionally featured dials indicating water and oil temperature. 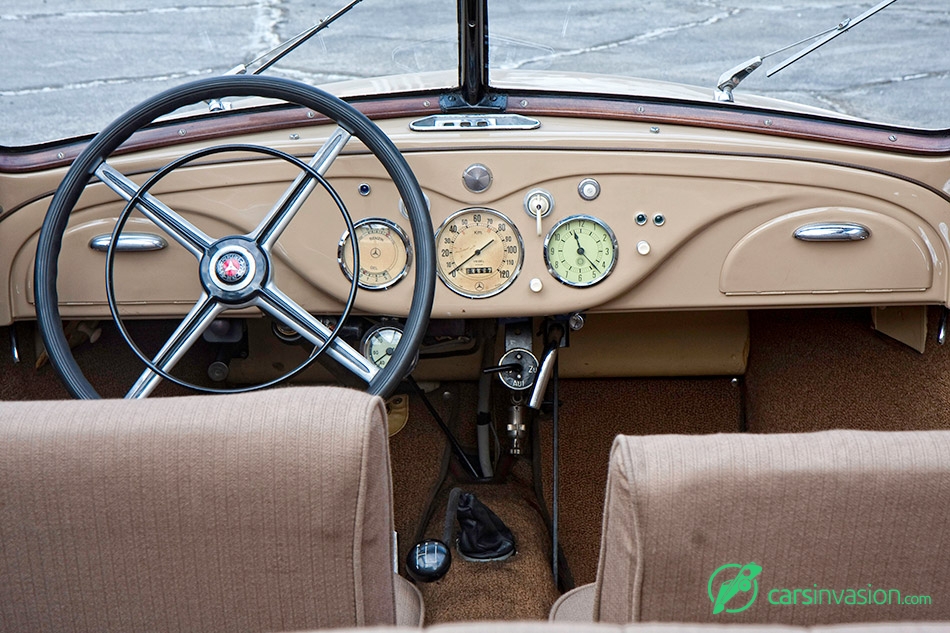 But the 170 H was never able to gain acceptance ahead of the 170 V. There were several reasons for this. For one thing, the 170 V was available in many more body variants, giving the customer a much wider choice. Another factor that hampered the success of the 170 H was its RM 600 higher price tag compared with the 170 V

For those who could afford one and had access to fuel rations, the 170 H model was a sought-after vehicle during the Second World War, because it was not one appropriated by the Wehrmacht. The army considered rear-engine cars to be unsuitable for their purposes – although this was before the Volkswagen-based Kübelwagen began its wartime career in Africa and Russia. But this fact also helps explain why such a relatively large number of 170 H models survived the Second World War and why it was one of the few vehicles available for civilian use. But it was all to no avail. When more advanced concepts finally caught on, many of these very special Mercedes-Benz rear-engine vehicles ended up on the scrapheap – and very few survived.