With the introduction of the seventh Golf (in 2012), Volkswagen was able to finally reverse the upward weight spiral, despite significant progress made in the areas of safety, comfort, convenience and agility. Compared to the previous generation Golf, up to 100 kg were saved. The new Golf TSI BlueMotion also benefits from this today.

The BlueMotion models by Volkswagen have always been characterised by exceptionally good aerodynamics. This is precisely what the new Golf TSI BlueMotion offers as well. Thanks to a wealth of aerodynamic modifications, it achieves an outstanding Cd value of just 0.28. The car's excellent aerodynamics make a decisive contribution towards its low fuel consumption. The aerodynamics were perfected, among other things, by lowering the chassis (by 15 mm), designing an upper engine cooling inlet that is almost entirely closed off to the outside (with integrated BlueMotion badge) and using radiator louvres that open based on cooling needs in conjunction with an optimised cooling airflow. In addition, the Golf TSI BlueMotion is equipped with a rear spoiler. 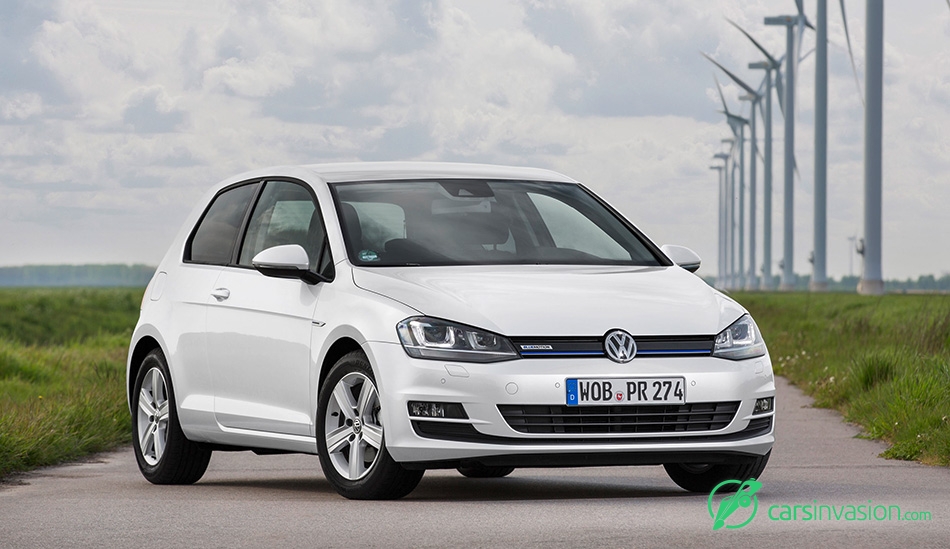 Three primary objectives were set for the development of the 1.0 TSI (85 kW / 115 PS) compared to the already very good 1.2 TSI (81 kW / 110 PS) with four cylinders: it should attain lower weight and reduced CO2 emissions while improving driving dynamics. This was a challenge, but all three objectives were achieved in the new three-cylinder engine. Its weight was reduced by 10 kg (to 89 kg now), and its CO2 emissions were reduced by 10 per cent. The gain in dynamics and good responsiveness are best tested on the road. Figures that most reflect driving dynamics are the boost in torque from 175 Nm to 200 Nm and the better flexibility figure of 11.0 seconds (1.2 TSI: 13.0 seconds, manual gearbox, 80-120 km/h in 5th gear). Another important goal was to attain the lowest possible level of engine noise. Based on the interplay of various internal engine modifications - that is, without additional insulating materials, the team of engineers implemented acoustics that are on the level of good four-cylinder engines here.

The Volkswagen EA211 engine series served as the innovative foundation for designing the new 1.0 TSI. This development code refers to a family of state-of-the-art petrol engines and incorporates both three-cylinder and four-cylinder engines. The EA211 engines made their debut in the small Volkswagen up! and progressively conquered car segments up to that of the Passat. Engine versions with 1.0, 1.2 or 1.4 litres of displacement - with or without turbocharging - are used, depending on the model series. The high-tech engine now being used in the new Golf TSI BlueMotion is the latest three-cylinder engine with turbocharging, and today it represents the highest evolutionary stage of downsizing. Volkswagen offers the engine in the Golf TSI BlueMotion in combination with a 6-speed manual gearbox as standard. As an option, the most fuel-efficient petrol-powered Golf ever can also be ordered with a 7-speed dual-clutch gearbox (DSG). The combined fuel consumption and CO2 figures are identical regardless of the gearbox: 4.3 l/100 km (premium petrol, 95 octane) which equates to 99 g/km CO2. With these values, the Golf TSI BlueMotion is one of the few cars in its class to fulfil the European efficiency class A.

The engine's maximum torque of 200 Nm is available from a low 2,000 rpm; this figure remains constant up to 3,000 rpm. 200 Nm is considered a top value for a three-cylinder engine, and the engine already provides a hefty 175 Nm of torque to the front axle at just 1,500 rpm. This is one reason why this engine's performance is so dynamic. What's more: the turbocharged petrol engine with its 10.5:1 compression ratio enables both cruising in high gear - thanks to the maximum torque being available at low revs - and quick upshifting from lower gears at higher rev levels. The turbocharged engine develops its maximum power of 85 kW/115 PS between 5,000 and 5,500 rpm. Although the three-cylinder sets standards for efficiency, it also enables dynamic driving performance. The Golf TSI BlueMotion reaches 100 km/h in 9.7 seconds and goes on to a top speed of 204 km/h.

Thanks to an ultra-rigid crankcase made of lightweight die-cast aluminium (weight: 15 kg), and its compact construction with three cylinders instead of four, the 1.0 TSI - at 89 kg is around 10 kg lighter than a comparable four-cylinder engine. The meticulously implemented lightweight design approach employed by Volkswagen ranges down to the smallest of details. Some examples: 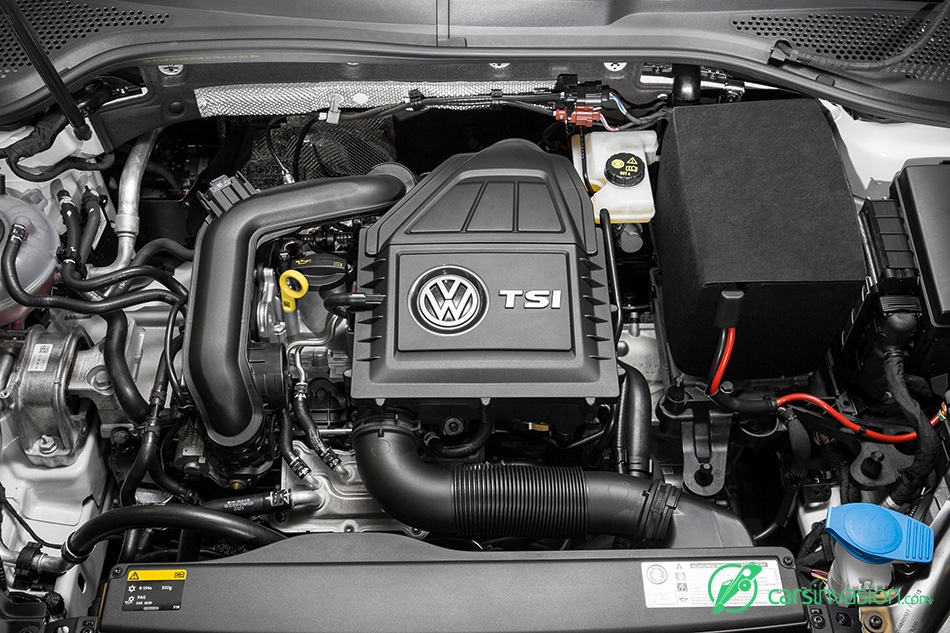 Another very high priority item during the development phase was thermal management. The exhaust manifold of the 1.0 TSI has been fully integrated into the cylinder head - that features four valves per cylinder - and fitted with a separate cooling jacket to make the best possible use of exhaust gas energy during the warm-up phase - and to cool the exhaust gases even more effectively at high loads. On top of that, Volkswagen engineers designed a dual-loop cooling system. By using an additional thermostat, the coolant temperature in the cylinder crankcase is regulated to a higher level than in the cylinder head. This offers benefits in terms of internal engine friction, which in turn have a positive effect on fuel economy.

The base engine is cooled by a high-temperature loop with a mechanically driven coolant pump, while a low-temperature loop, powered by an electric pump, circulates coolant to the intercooler and turbocharger housing as needed. The passenger compartment is heated by the cylinder head circulation loop, so that it warms up quickly like the engine.

Thanks to the ingenious design of the exhaust manifold, Volkswagen was able to utilise a compact and lightweight single-scroll compressor with an electric wastegate actuator. This wastegate actuator performs the crucial opening and closing of the bypass valve very quickly. Background: in the low rev range, the bypass valve (also known as a wastegate valve) must be closed in order to drive the turbocharger with the full exhaust gas stream of up to 1,050 degrees C to ensure a consistent build-up of torque. Its maximum charge pressure is 1.6 bar. To reduce losses in the charge changing process in part-load operation, the exhaust backpressure can be reduced by fully opening the wastegate. The engine's responsiveness is improved, because the wastegate actuator is able to regulate the pressure in the wastegate valve very quickly.

Due to its design, internal friction in the small three-cylinder engine of the Golf TSI BlueMotion is already rather low. Moreover, this engine also benefits from the overall innovative design layout of the EA211 engine series and related measures implemented to reduce internal friction. This not only relates to the crankshaft group, as mentioned above, but also to the valve control and auxiliary drives. The 1.0 TSI is equipped with inlet and exhaust camshaft adjustment; the adjustment range is 50 degrees of crankshaft angle on the inlet side and 40 degrees on the exhaust side. By taking this approach, the designers of the three-cylinder engine achieve a powerful torque build-up at low engine revs and high power at high revs. The two overhead camshafts are driven by the crankshaft via a toothed timing belt. Compared to a chain drive, it exhibits around 30 per cent less friction. Thanks to its high-end material specification, this toothed timing belt's service life reliably spans the entire life of the vehicle. As a result, it is no longer necessary to perform the previously obligatory replacement of the toothed belt as a maintenance item. Overall, the ingeniously harmonised forces of the toothed belt drive lead to low friction, improved fuel economy and greater durability.

The maximum injection pressure of the 1.0 TSI is relatively high for a petrol engine at 250 bar. Highly advanced 5-hole solenoid injectors, which are supplied with fuel from a stainless steel fuel rail, make extremely precise injections into each cylinder with up to three individual injections per cycle. A more efficient combustion process with faster energy conversion is achieved based on the interplay of the injection components with a further developed charge cycle (optimised thermodynamics), in which the air-fuel mixture flows into the combustion chamber extremely rapidly via a tumble channel. Here too, this results in noticeably improved responsiveness and extremely low emission figures.

Last but not least, the sum of many minor improvements have made the 1.0 TSI one of the most compact and efficient petrol engines in existence. Here are two examples: To ensure that the engine takes up as little mounting space as possible, ancillary components such as the water pump, air conditioning compressor and alternator are attached directly to the engine and oil sump without additional brackets, and they are driven by a toothed belt running over a permanent tension roller. In addition, the engine has a map-controlled oil pump that only draws as much power as required at the specific operating point. In summary, Volkswagen is convinced that the new 1.0 TSI represents a milestone in the field of small petrol engines with its compact construction, excellent power and torque figures for this displacement class, and its exceptionally low CO2 emissions.

The new Golf TSI BlueMotion - like its counterparts with TDI and TGI drives - will be offered in Trendline and Comfortline trim levels. In addition, most optional features are also available for the BlueMotion models. Standard exterior features of the Golf TSI BlueMotion Trendline include 15-inch "Lyon" alloy wheels, a larger rear spoiler (in body colour) and a radiator grille that is almost entirely closed off to the outside. The grille consists of smooth black trim with integrated BlueMotion badge and a chrome strip beneath it, which extends into the headlights. Other special features tailored for the BlueMotion version include black air inlets in the bumper, optimised cooling airflow, sport suspension (lowered by 15 mm) and super low rolling resistance tyres. If the Golf TSI BlueMotion is ordered with the optional xenon headlights, the radiator grille is upgraded with a blue stripe between the headlights. 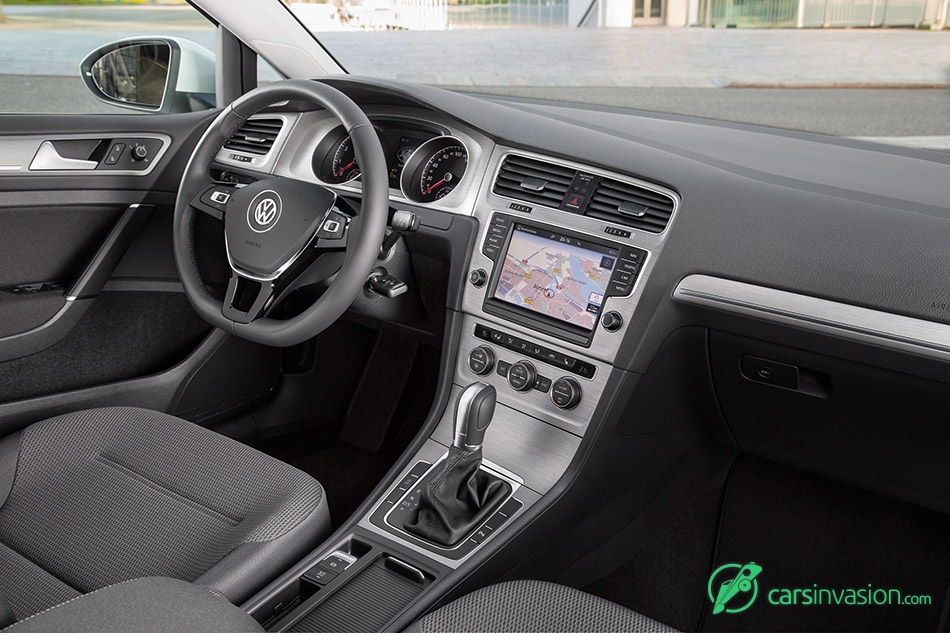