The grand finale: the SLS AMG GT FINAL EDITION brings an impressive era to an end in exclusive style. The FINAL EDITION model, built in a limited run of just 350 units, represents the last opportunity for customers to order an SLS AMG – while at the same time reflecting the unrivalled success story and unique scope offered by the first vehicle to be completely built by Mercedes-AMG. The super sports car, with its 591 hp AMG 6.3-litre V8 front-mid engine, offers a fascinating combination of truly exceptional design and equipment features. Exclusively developed Cup tyres enhance its dynamic performance.

The SLS AMG GT FINAL EDITION is celebrating its twin world premiere at the Los Angeles Auto Show and the Tokyo Motor Show (both: 20 November to 1 December 2013). The market launch will begin in March 2014. The super sports car will be available as either a Coupé or a Roadster and, once 350 units have been built, production of the SLS AMG model series will come to an end.Tobias Moers, Chairman of the Board of Management of Mercedes-AMG GmbH: "As the first car to be completely developed by AMG, the SLS AMG marked the beginning of a new era for our company. And now, in the form of the SLS AMG GT FINAL EDITION, we are offering our customers one final and extremely attractive variant of our super sports car. With its numerous carbon fibre-look body components, a further optimised aerodynamic balance and optional Cup tyres, the SLS AMG GT FINAL EDITION has the absolute potential to fascinate." 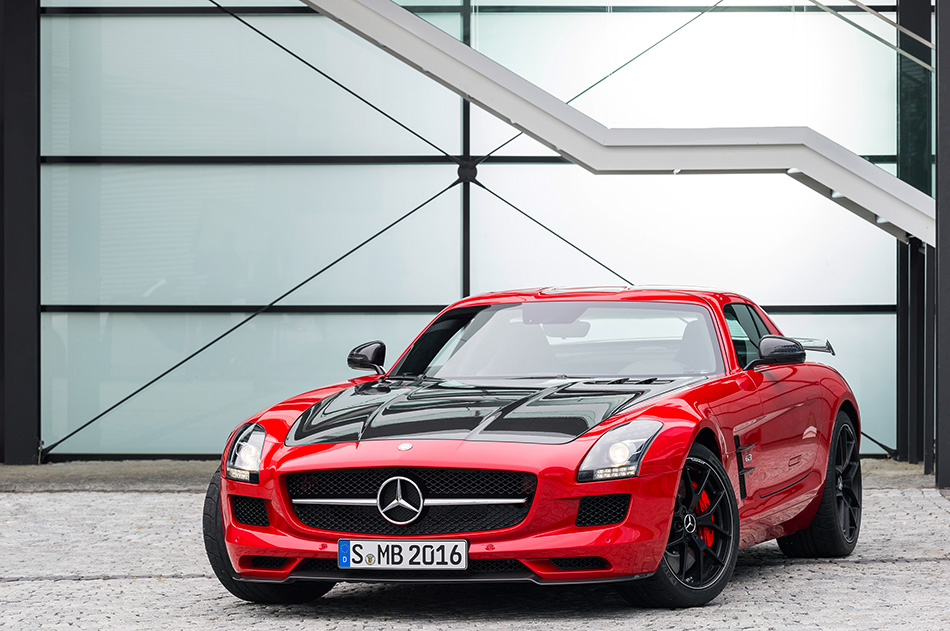 The special design of the SLS AMG GT FINAL EDITION ensures that it stands out in visual terms: the carbon fibre-effect bonnet with central air outlet, the carbon-fibre front splitter on the front apron, the fixed carbon-fibre rear aerofoil that is so reminiscent of the SLS AMG Coupé Black Series and the exclusive AMG forged light-alloy wheels make it a real head-turner. When paired with the designo magno graphite matt paintwork that has been adopted from the collector's model, the SLS AMG GT3 "45th ANNIVERSARY" (available as an option), the carbon fibre components and the AMG forged wheels have a distinctly sporty flair. To add to the distinctive visual impression when seen from behind, the struts of the rear apron are finished in high-gloss black.

New aerodynamic components comprising a carbon-fibre bonnet, rear aerofoil and front splitter reduce the lift on both the front and the rear axle. As on the SLS AMG Coupe Black Series and the SLS AMG GT3, the carbon-fibre bonnet of the SLS AMG GT FINAL EDITION features a central air outlet. Apart from effectively dissipating engine heat, this outlet also increases downforce at the front axle and improves the Cd value. The engineers at AMG have utilised the vacuum effect to deliver the double benefit of dissipating the hot air from the engine compartment at the same time as drawing up the cool airflow from the vehicle's underbody. The optimised aerodynamic balance not only improves the car's potential on the racing circuit, but also contributes to handling safety.

The AMG forged wheels in a cross-spoke design are available in two colour variants: painted matt black with a high-sheen finish or painted matt black with a high-sheen rim flange. Red-painted brake calipers provide an effective contrast. New "Dunlop Sport Maxx Race" Cup tyres in size 265/35 R 19 (front) and 295/30 R 20 (rear) are available on request as a no-cost option. These Cup tyres have been exclusively developed for Mercedes-AMG. Not only do these improve steering precision: they also increase grip. The SLS AMG GT FINAL EDITION thus lends itself for use by aspiring racing drivers on private or closed-off circuits.

Opening the carbon-fibre bonnet reveals the front mid-mounted AMG 6.3-litre V8 power unit set low down and well to the back. With an output of 591 hp at 6800 rpm and maximum torque of 650 newton metres at 4750 rpm, the high-revving eight-cylinder engine guarantees dynamic driving at its finest. The SLS AMG GT FINAL EDITION accelerates from 0-62 mph in 3.7 seconds, and can reach 125 mph in 11.2 seconds. The top speed is 198 mph (electronically limited).

Fast-reacting, variable and emotionally exciting – the AMG SPEEDSHIFT DCT 7-speed sports transmission proves to be the perfect match for the V8 naturally aspirated engine. With four shift programmes, RACE START and an automatic double-declutching function, the dual-clutch transmission mounted in a transaxle configuration on the rear axle brings with it the perfect prerequisites for top performance. The particularly dynamic shift characteristics, and the shorter reaction time when selecting gears manually, enhance the emotional experience for the driver. The AMG RIDE CONTROL performance suspension with variable, electronically controlled damping, includes the "Sport" and "Sport plus" programmes.

Interior with designo Exclusive leather in a diamond pattern

It is not only the exterior design and the engineering of the SLS AMG GT FINAL EDITION that will satisfy the most discerning of tastes, but also the interior: the high-quality ambience is characterised above all by the striking designo Exclusive leather in a diamond pattern that is used to upholster the centre panels of both the seats and the doors. Contrasting topstitching in silver coordinates perfectly with the black leather upholstery, the silver seat belts and the black floor mats edged in silver leather. Carbon-fibre trim comes as standard. 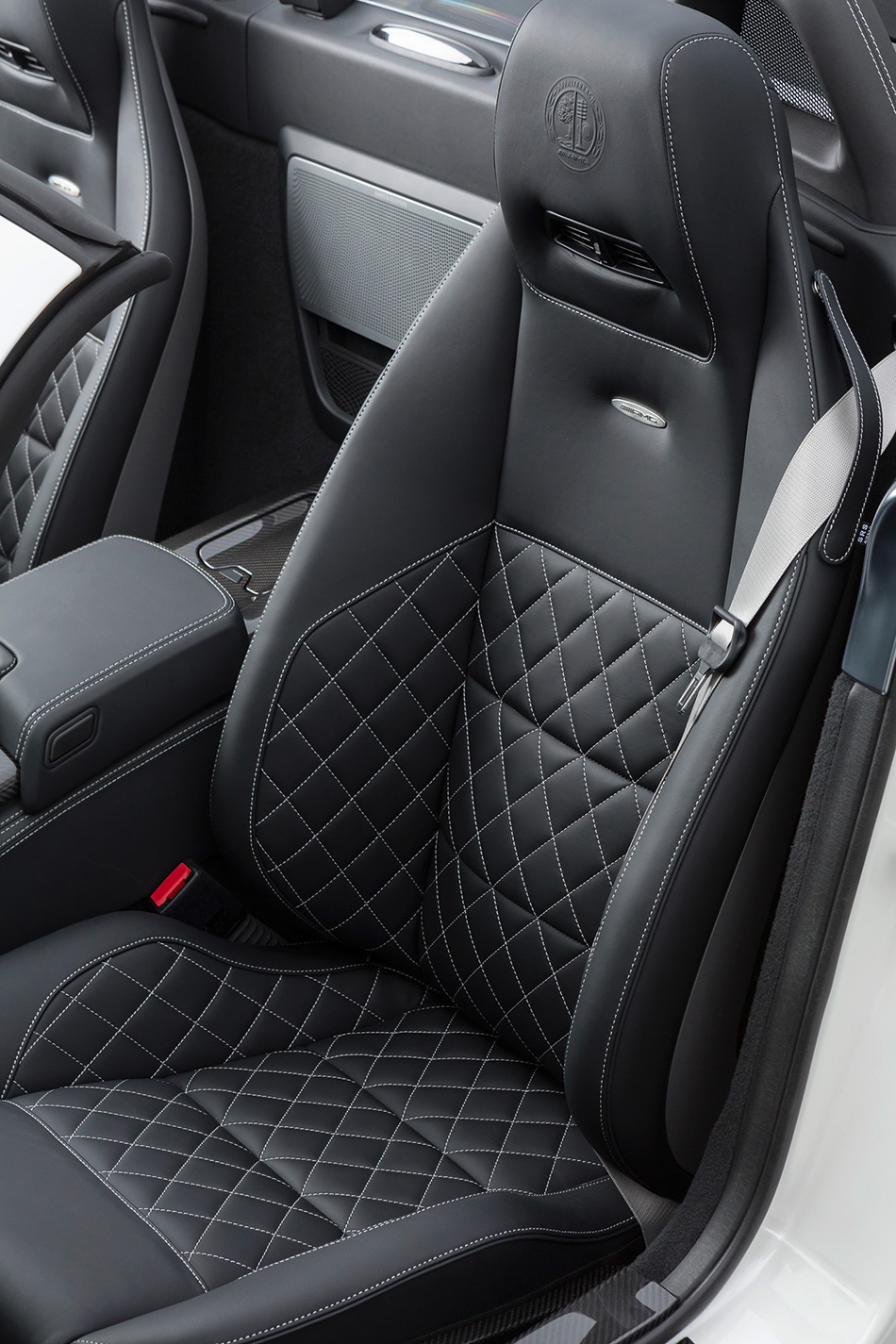 A particularly exclusive detail is the "AMG FINAL EDITION - 1 of 350" badge on the carbon-fibre centre console. A further high-quality feature, both to look at and to feel, is the so-called "3D seam": a fine strip of Alcantara® set into the leather-covered instrument panel demonstrates the attention to detail that is so typical of Mercedes-AMG. Contrasting topstitching skilfully hand-worked in silver adds the finishing touch to the 3D seam, underlining the craftsmanship involved. The AMG Performance steering wheel in Alcantara® with silver 12 o'clock markings all-round and a high-gloss black real metal insert matches the high-gloss black surrounds of the air vents. The sports seats feature an embossed AMG emblem in the head restraints.

The market launch of the SLS AMG GT FINAL EDITION will commence in March 2014.  UK Pricing and Specification is still to be confirmed.