When the Lancer Evolution debuted in North America in 2003, it did something extraordinary: it lived up to the hype. "The Evolution proved that Mitsubishi not only could compete with the best performance cars in the world, but that we could offer something most performance cars don't," said Mike Krebs, vice president of product planning for Mitsubishi Motors North America (MMNA). "And that's value."

Not content to rest on past achievements or awards, Mitsubishi continues to refine one of Japan's most revered - and one of the world's best-handling - competition-derived production cars. Finding room for improvement was no small task, so Mitsubishi turned to one of the world's most powerful automotive microscopes: Nürburgring.

The Nürburgring Nordschleife is notorious for its bumpy and undulating surfaces, twisting corners and changes in surface friction. It was there that engineers discovered one potential area of improvement for the Lancer Evolution. "Better driving quality" became an engineering mantra. The Nürburgring test results brought home the need to deliver every bit of power to the road surface through all four tires; it also showed the need for accurate feedback that gives the driver the highest level of control over where those tires are placed. As the result of years of development focused on ride and handling, Mitsubishi introduces the next level in handling performance: the Lancer Evolution MR Edition. 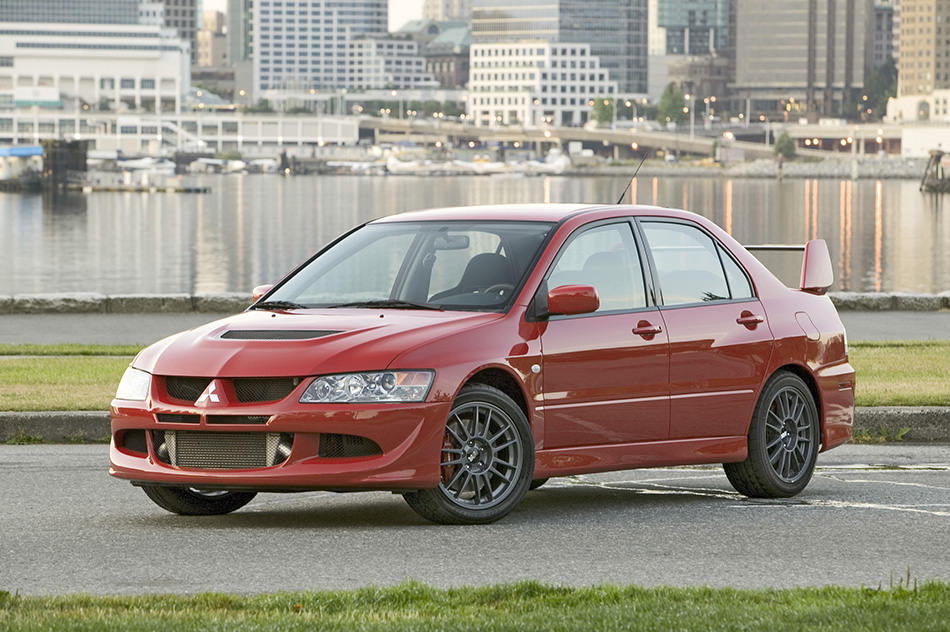 The tradition of the high-performance Mitsubishi Racing moniker dates back to 1970, with the Mitsubishi Galant GTO MR, Mitsubishi's first production car powered by a DOHC engine that boasted 125 horsepower. So while times - and engine outputs - have changed, Mitsubishi's commitment to performance has not.

The Lancer Evolution MR Edition strikes the delicate balance between grace and power. Building on the Lancer Evolution's rally-proven reputation, the MR Edition pushes the performance envelope even further with improvements to the crucial elements that make driving a true pleasure. Engine output was increased, but more power was not the top priority. Although the recent meteoric rise of horsepower figures seems to be the top selling point for many new vehicles, Mitsubishi focused its development efforts on the intricate coordination between engine output and handling performance.

On all Lancer Evolutions, the 2.0-liter inline four-cylinder DOHC intercooled-turbocharged engine is tuned to deliver maximum power over the mid- to high-rev band, generating 286 lb-ft of torque at 3500 rpm. Horsepower also has increased - from 271 to 276 hp, available at 6500 rpm.

As an exclusive for the MR Edition, a six-speed transmission makes the power more accessible. The Evolution's AWD system gains an Active Center Differential (ACD) and front limited-slip, which - combined with Sports ABS - creates a more natural, better-mannered driving feel. Man and machine have never been so intimately linked.

Compared to the five-speed Lancer Evolution, the new Lancer Evolution MR Edition is distinguished by the addition of an exclusive new color called Graphite Gray. Named after a carbon compound that implies lightweight and strength, Graphite Gray complements other dark color tones and reflects the Lancer Evolution's extensive use of carbon, aluminum and other high-tech materials. The color also accentuates the model's no-frill functional aesthetics. The outboard faces of the rear-deck spoiler plates use a dark gray finish close to the color of the carbon wing, replacing the body color-keyed treatment on the other colors.

At the trailing edge of the MR Edition's roof, a vortex generator creates small vortices that reduce drag and increase the down force generated by the rear-deck spoiler. The generator vanes are finished in the same dark gray as the outer panels of the spoiler.

The MR Edition's sport meter gauge kit is made up of a three-ring gauge cluster located in the center stack. The gauges display boost, voltage and oil pressure. Another unique feature for the MR Edition: a stainless steel plate embossed with the "Lancer Evolution MR" name badge. As with the trunk lid emblem, the "MR" designation is finished in red to stamp its presence more vividly on the interior.

On all Lancer Evolutions, an ACD indicator is located on the combination meter, inside the tachometer display. The switch itself (Tarmac/Gravel/Snow) is located on the dash just to the left of the steering column. An optional 315-watt Infinity audio system includes a trunk-mounted subwoofer. (This option is not available on the MR Edition or the RS.) Larger cup holders are added to the console. 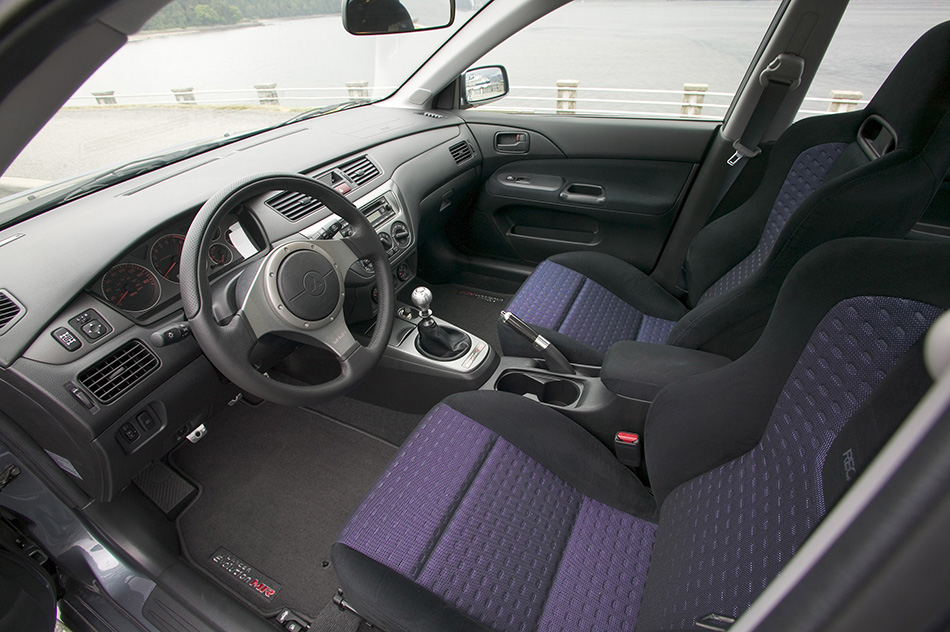 THE EVOLUTION AND JENNY CRAIG

For the new MR Edition, Mitsubishi extracted weight from the already lean Evolution without sacrificing strength or durability. In fact, in total 27.6 lbs (12.5 kg) of mass was taken out by replacing steel parts in favor of high-strength aluminum.

A lightweight aluminum roof and lightweight, high-strength aluminum door impact bars lower the center of gravity and reduce roll moment. The aluminum impact bars (shared with all Evolutions) account for a reduction of 7.7 lbs (3.5 kg) per car, and the MR Edition and RS's aluminum roof saves another 8.8 lbs (4.0 kg).

The front door side impact bars have been changed from steel to high-strength aluminum, reducing weight nearly 8 lbs (3.5 kg) while providing the same level of impact safety. The new door impact bars are used in the entire Lancer Evolution line, while the aluminum roof is offered only on the MR Edition and RS.

The same engine modifications that help the MR Edition achieve its higher output also make their way into the entire Lancer Evolution lineup, as do the additions of the Active Center Differential and front helical Limited Slip Differential. To moderate input on the drivetrain and reduce the load on the clutch, the engine is set to not climb above 5000 rpm when the car is still or when the clutch pedal is pressed.

The track-ready Evolution RS also receives one body panel from the MR Edition: its roof, which is made of lightweight aluminum for lower weight and a lower center of gravity. The RS also receives thin trunk-lid sheet metal to decrease weight.

For Lancer Evolutions equipped with the five-speed transmission, changes to the shape of the select return spring make it easier to feel the neutral position. A Teflon liner on the shift selector cable improves the precision of the shift knob positioning.

The Lancer Evolution stands for more than pure driving performance. Audio performance has been upgraded with an optional high-powered Infinity amplifier that delivers 45 watts through each of seven channels, for a total of 315 watts. Two 19-millimeter tweets are mounted on the A-pillar, four 16-centimeter full range speakers are mounted on the front doors and rear shelf, and a 20-centimeter subwoofer is integrated in a 20-liter enclosure that's mounted on the right side of the trunk. The Infinity audio system is available only on the Lancer Evolution.