Possessing eye-catching styling whether its top is up or down, a vast selection of high-end luxury-oriented features and accessories included at no additional cost to the consumer and offering a driving experience on a par with infinitely more expensive, open-top grand touring machines, the sub-$30,000 introductory MSRP 2011 Mitsubishi Eclipse Spyder is a mid-size convertible sports car that leaves its rivals in its well-healed dust.

Available in two trim lines - a remarkably refined and well-equipped "base" model Eclipse Spyder GS Sport with an able 4-cylinder engine and the even more plush and powerful V-6-equipped Eclipse Spyder GT - this good-looking and very fun-to-drive soft top is the ideal choice for the consumer who enjoys their time behind the wheel of a spirited sporting machine while letting the unobstructed sun shine in. 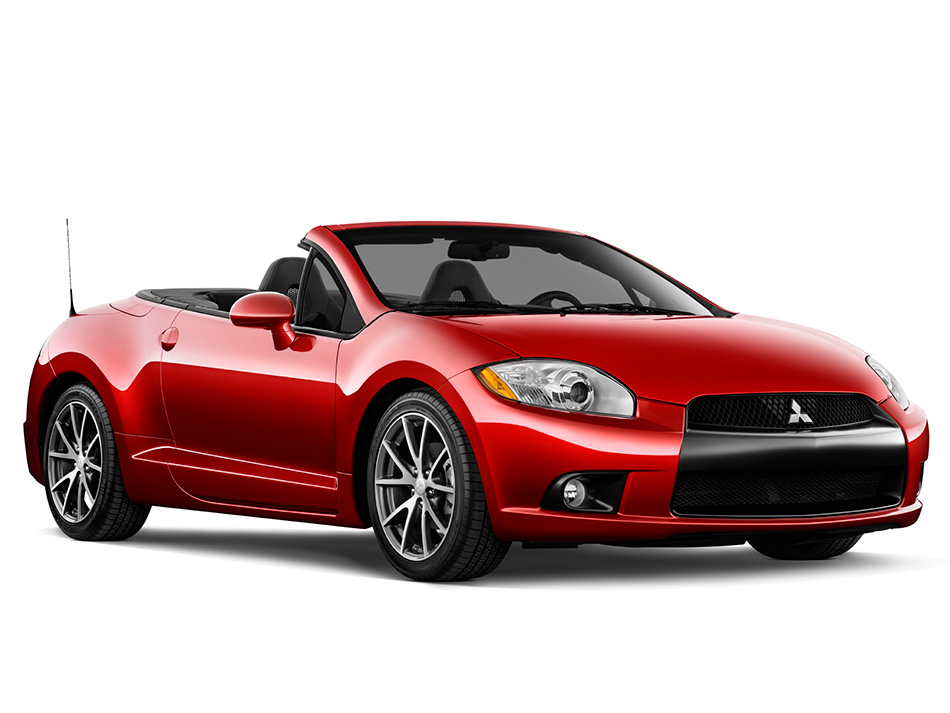 New for the 2011 Mitsubishi Eclipse Spyder

Both the 2011 Mitsubishi Eclipse Spyder GS Sport and GT models now feature a ride height that has been lowered by 0.6 in. (15 mm). This not only infuses the handsome and sporty 2+2 convertible with a more aggressive look but also improves the car's aerodynamics.

A convenient new included on every 2011 Mitsubishi Eclipse Spyder is the addition of a 12V accessory power outlet. Located on the center console, it provides an ideal location for accessing and/or conveniently powering/recharging popular portable electronic devices including an iPod® or a GPS navigation system.

Along Came a Spyder

Many convertible cars in the sub-$30,000 price category skimp on design details when it comes to materials associated with their soft tops in the name of cost-cutting, but this is certainly not the case with the 2011 Mitsubishi Eclipse Spyder.

From the get go, Mitsubishi engineers designed the Eclipse platform for both enclosed coupe and open-top convertible configurations, so the top-down version includes all of the essential chassis reinforcements to maintain the vehicle's structural integrity - the Spyder feels just as solid as the coupe when out on the open road.

With the top up, the cabin remains surprisingly quiet, thanks to a high-quality, multi-layer cloth top (not cheap vinyl like some class competitor's convertible tops) with a headliner that looks identical to that found in the closed-top coupe.

The Eclipse Spyder's power top folds quickly and completely out of view beneath a flush-fitting, hard shell tonneau cover in only about 19 seconds. The top's rear window is composed of glass and features a defroster - no flimsy plastic window here. And while wind buffeting is minimal in the Eclipse Spyder GS Sport, it is reduced even further in the top-of-the-line Eclipse Spyder GT, thanks to an included removable wind deflector.

Every 2011 Mitsubishi Eclipse Spyder GS Sport is equipped with a normally-aspirated 2.4-liter (2378 cc) SOHC 16-valve 4-cylinder engine that features a sturdy cast iron block and a lightweight aluminum cylinder head. With a bore and stroke of 3.43 x 3.94 in. (87.0 x 100.0 mm) and a compression ratio of 9.5:1, this engine produces its maximum power output of 162 horsepower at 6,000 rpm and its peak torque of 162 lb.-ft. at a much lower 4,000 rpm. Additional cost savings to the consumer is achieved thanks to this engine's ability to run on regular unleaded gasoline.

To make the most of the fun handling capabilities of this top-down sports car, all of the top-tier 2011 Mitsubishi Eclipse Spyder GT models are powered by an engine that produces more than 100 horsepower over that of the 4-cylinder powerplant in the Eclipse Spyder GS Sport. The potent engine propelling the GT is a rev-happy, normally-aspirated 3.8-liter (3828 cc) SOHC 24-valve V-6 engine that, like the 4-cylinder unit, is composed of a high-strength cast iron block topped off by aluminum-alloy cylinder heads. With a higher compression ratio than the 4-cylinder engine and a bore and stroke measuring 3.74 x 3.54 in. (95.0 x 90.0 mm), this highly-capable V-6 is a joy to put through its paces with a full 265 horsepower on tap at 5,750 rpm and 262 lb.-ft. of torque produced at 4,500 rpm.

To achieve optimal power, low emissions and maximize fuel efficiency, both the I-4 and V-6 engines include Mitsubishi Innovative Valve timing Electronic Control (MIVEC) variable valve-timing system. Each engine's rpm redline threshold is reached at 6,500 on the tachometer.

Matching the sumptuous ride offered by the Eclipse Spyder's rock-solid chassis and smooth-operating engines are a pair of automatic transmissions more than up to the task. The 4-cylinder-powered Eclipse GS Sport features an effortlessly-shifting 4-speed automatic transmission while the Eclipse GT adds an additional cog to its 5-speed automatic gearbox. Both units feature Mitsubishi's Sportronic® transmission technology that allows the driver to make quick manual gear changes by pushing forward or pulling back on the gearshift lever.

If the 2011 Mitsubishi Eclipse Spyder's deluxe open air driving experience isn't enough to satiate its owner's desire for an upscale ride, then perhaps the car's very long list of included lavish features and appointments will do the trick.

Every 2011 Mitsubishi Eclipse Spyder includes numerous ingenious safety design features and technologies incorporated into this convertible 2+2. Among these are an advanced dual front air bag supplemental restraint system (SRS) including dual action inflator with crash zone and seat position and occupant sensors; both head and thorax side air bags; energy-absorbing front and rear crumple zones and side impact door protection. Advanced electronic driver aids that help the driver to control the vehicle in adverse traction situations include anti-lock brakes (ABS) with Electronic Brake-force Distribution (EBD); Active Stability Control (ASC) and Traction Control Logic (TCL). A Tire Pressure Monitoring System (TPMS) that can alert the driver should a tire's air pressure fall below a safe level is also included at no charge.