At the rear of the car, where the giant wing is attached, you can see the words "Nissan LEAF". For the powertrain of this machine, the same high performance lithium ion battery and motor are used as in the world's first mass-produced electric car, the Nissan LEAF. Despite the differences such as the rear doors, rear seat, boot, audio, navigation systems and carpet, you can tell at a glance that this car is related to the Nissan LEAF. However, the similarities between the mass-produced Nissan LEAF and the Nissan LEAF Nismo RC end there. The initials RC, which stand for Racing Competition, this car was developed specially to give a new meaning to the term "Racing Green".

Released for European sale in 2011, the Nissan LEAF is already a world leader in the zero emission vehicle market. Now, as a way to draw attention the future possibilities of electric cars, Nissan has turned their attention to the world of competition. 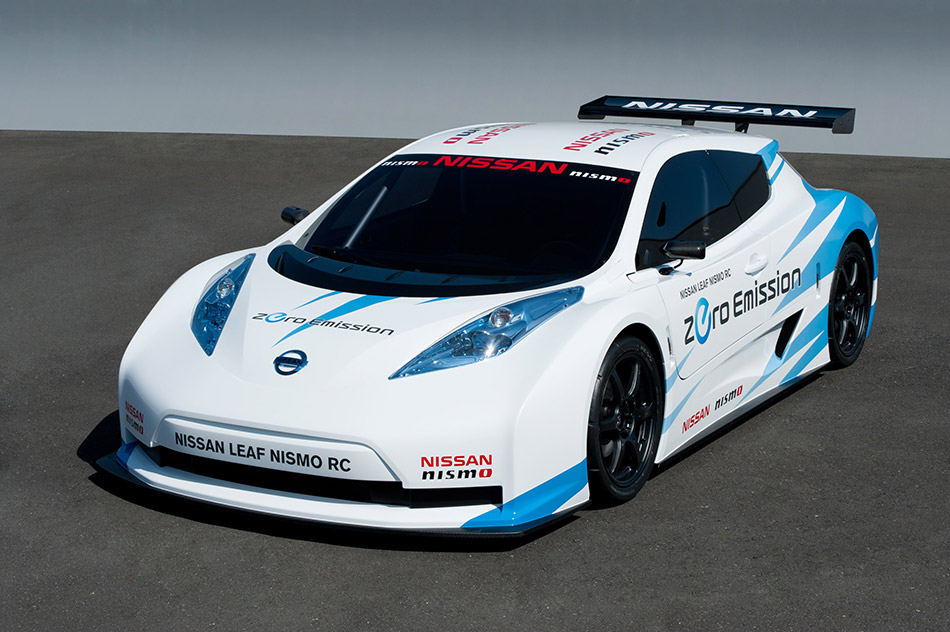 The Nissan LEAF Nismo RC combines the strengths of Nismo, Nissan's world-renowned motorsports company, and the engineers that support the GT-R in its races in the Super GT series and the FIA GT1 World Championship. It functions as a platform for further advancement in "green" motorsports by being a "driving laboratory" in electric vehicle technology and aerodynamics.

The Nissan LEAF Nismo RC uses a full carbonfibre monocoque chassis and is designed and built as a bona fide racing vehicle. The three-part body allows for the front and rear sections to be detached. In addition, fixed position windows and LED front and rear lights are employed. This 2-door race-spec model was designed at the Nissan Global Design Center beginning with the exterior of the production Nissan LEAF as its base. Its look is topped off with solid white and a blue Nismo/Zero Emission logo.

The Nissan LEAF Nismo RC's body is 20mm longer, 170mm wider, and has a 99mm shorter wheelbase than the road Nissan LEAF. The biggest difference is the 350mm drop in height. While the production model has 160mm of ground clearance, the Nismo RC has 60mm. Also, the vehicle's weight has been reduced by approximately 40%.

The internal layout of the Nissan LEAF Nismo RC also differs greatly from the vehicle it is derived from. The battery pack, motor and inverter have been moved to the middle of the vehicle and the drivetrain changed from front-to rear-wheel drive. Also, the suspension employs both a front and rear double wishbone configuration and the driver is able to adjust the brake balance. Bridgestone P225/40R18 racing tyres give tread to the Nissan LEAF Nismo RC.

In June 2011, the Nissan LEAF Nismo RC made an appearance at the Circuit de la Sarthe prior to the 24 Hours of Le Mans in France and conducted demo laps of the 13.6km course. The following month, it traveled to England and had a go at the hillclimb at the Goodwood Festival of Speed, renowned as the largest motorsports event on the planet. Most recently it has demonstrated its fearsome potential at the Dubai Autodrome circuit to a group of international journalists.