A look into Datsun's possible future is revealed by a dramatic new concept being given its world premiere at the 12th Delhi Auto Expo 2014 - the Datsun redi-GO CONCEPT.

The name reflects the car's character. It is ready to support potential customers to explore a new day, to challenge new things and to build a way ahead. It also expresses the excitement of "ready to go" before people start their day's journey.

Shiro Nakamura, SVP and Chief Creative Officer, said: "Although Datsun redi-GO CONCEPT is just that – a concept – it shows clearly the way we are thinking. It's an ambitious styling exploration but, being a Datsun, it is a logical design, too". 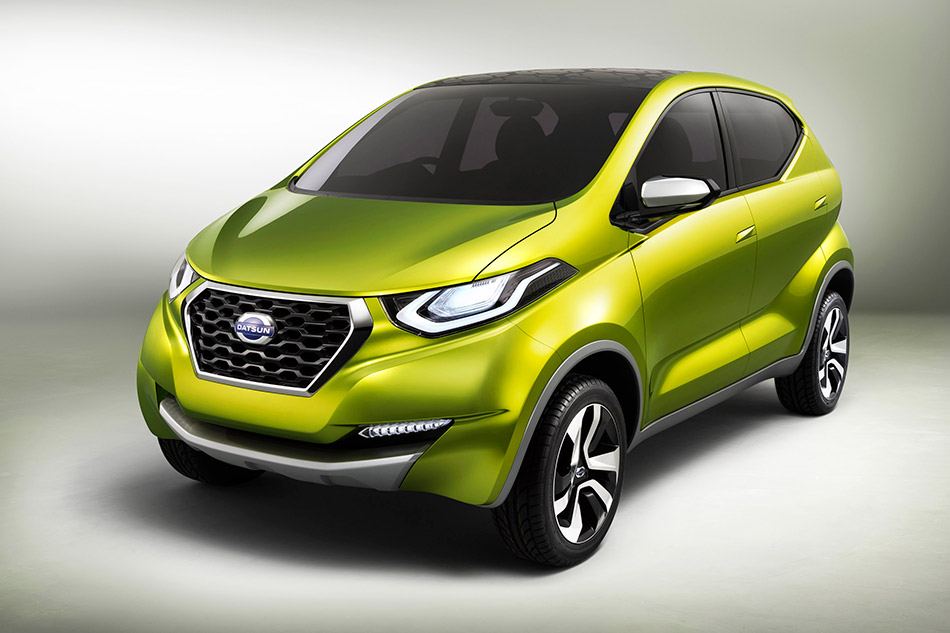 "When we were creating redi-GO CONCEPT we had a few keywords in mind. We wanted a modern and characteristic design that, at the same time, appeared long-lasting and substantial. We feel we have managed to combine these apparent contradictions in the concept," said Koji Nagano, Executive Design Director, who leads the entire Datsun design project.

With its short overhangs and crossover-style raised body, the compact concept has dynamic rising twin character lines running from front to rear which create the solid and strong boned side profile to the car, emphasizing its agility and robustness.

The modern headlights incorporate distinctive, narrow daytime running lights while the rear LED taillights feature an idiosyncratic twist of light to give Datsun redi-GO CONCEPT a unique visual signature when on the move. LED fog lights strips are fully integrated into the front bumper.

The dynamic movement, strong shoulder line, the shapes of the side windows and the grille with gently curving corners framing a large central area echo the style to be introduced at all Datsun models, namely 'D-cut grille'.

The roof is finished in matt black, patterned with a distinctive tessellated formation, showcasing a future personalization opportunity, and giving the impression that the windscreen extends over the cabin and finishes in an extended spoiler.

There are practical benefits of the crossover styling, too. The raised body and large wheel arches offer greater ground clearance allowing the car to cope better with challenging road surfaces, while the commanding driving position gives drivers an enhanced – and therefore safer – view over the traffic ahead.

Although the concept remains a styling study at this stage, were it to be put into production it would be priced to target established compact hatchbacks delivering a compelling mix of modernity, quality and innovation.

"If we were to make a car like Datsun redi-GO CONCEPT it would be a segment creator in India, an aspirational car that at the same time is attainable, a car that would be within reach of the first time buyer. This concept shows how serious we are about reinvigorating the market by catering for the needs of a growing class of Indians who have the chance to own a family car that will enable them to enjoy a new sense of independence. Despite its long and glorious history, Datsun is a young brand ready to make a positive impact in the market, offering buyers a refreshing alternative to existing products and brands" said Vincent Cobee, Global Head of Datsun.

"The Datsun redi-GO CONCEPT represents a statement about our ambitions for the future. We are taking our first steps on a long road that will lead Datsun to a significant presence in this fast-moving market. Datsun will meet the needs of Indian's rising generation thanks to its modern thinking, dedication to quality and outstanding products. It's an exciting time for India and also for Datsun. The Datsun redi-GO CONCEPT reflects that excitement."