Each day, 600,000 New Yorkers hop in the back of a taxi – the iconic yellow cab that is a symbol of New York City around the world. Starting today, the first full vehicle prototype of the Taxi of Tomorrow can be seen by drivers, passengers and owners. The 2014 Nissan NV200 Taxi, New York's Taxi of Tomorrow, will make its global debut tonight at a special event in SoHo with Nissan President and CEO Carlos Ghosn and New York City Mayor Michael R. Bloomberg.

Following the event, the Taxi of Tomorrow is headed to the 2012 New York International Auto Show, where it will be on display for New Yorkers and visitors from around the world. The auto show at the Jacob Javits Center is open to the public April 6-15. 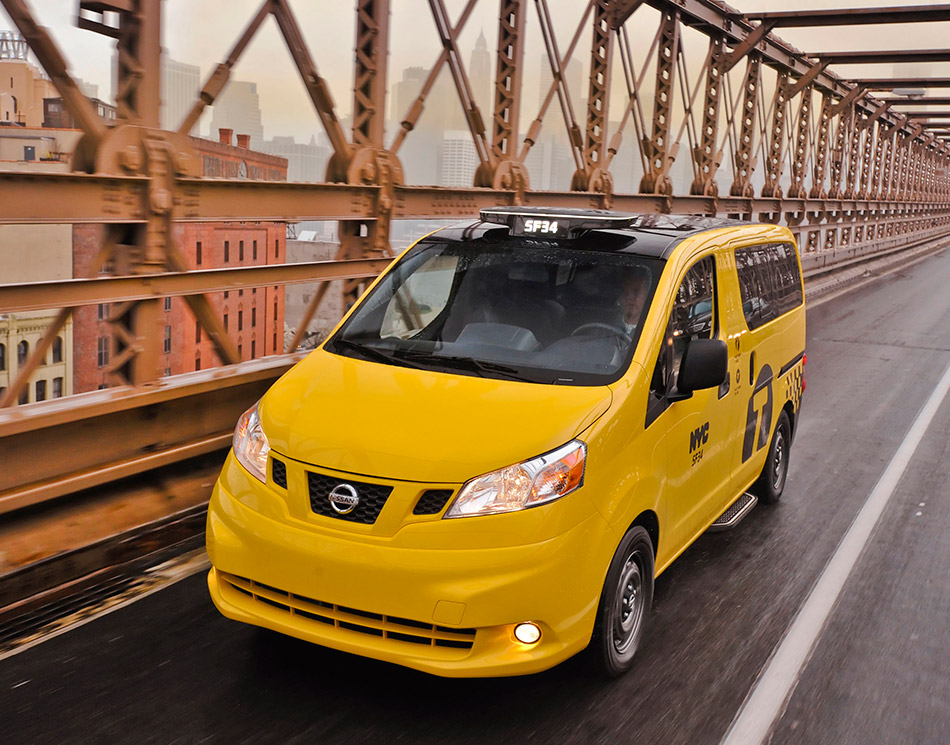 After a rigorous, two-year competitive bid selection process, the New York City Taxi and Limousine Commission (TLC) selected the Nissan NV200 Taxi in May 2011 as the exclusive taxi of New York City beginning in late 2013. The Cooper-Hewitt National Design Museum, the Design Trust for Public Space and Smart Design also have engaged with Nissan and the TLC in the vehicle's design.

"The Nissan NV 200 unveiled today will be the safest, most comfortable and most convenient taxi the City has ever had," said New York City Mayor Michael R. Bloomberg. "New York City cabs have always been iconic, and now they will set a new standard. The 600,000 passengers who use taxis to get around every day deserve the cutting-edge technology and top-of-the-line safety features that this model delivers."

Designed from the inside out, using input from New York taxi drivers, medallion holders, fleets and passengers, standard interior features and passenger amenities include:

Other notable vehicle features are:

In addition, important safety features of the Taxi of Tomorrow include:

With more than 13,000 taxis traveling a cumulative 500 million miles per year, building a taxi with the utmost durability is critical to the development process. Drawing on its full range of commercial vehicle experience – including providing taxis for municipalities around the world – Nissan will conduct significant validation testing for the Nissan NV200 Taxi prior to the vehicle going on sale. Additionally, as acknowledged by Mayor R. Bloomberg during the May 2011 announcement, the Taxi of Tomorrow will be the first New York taxi to be crash-tested with taxi equipment installed, including the partition.

Nissan has also partnered with the Braun Corp., the world leader in automotive mobility products, to develop, engineer and produce a creative solution for a wheelchair-accessible taxi in New York. Drawing on Braun's innovation and experience in the mobility industry, Nissan will offer a mobility solution to New York taxi medallion holders when the taxis go on sale in 2013.

As part of the Taxi of Tomorrow program, Nissan is also working with the City and taxi owners on a pilot program to study the use of zero-emission, electric vehicles as taxis. Nissan will provide six 100-percent electric Nissan LEAFs and three Level 2 charging stations at no charge to taxi owners and New York City to test the electrification of the taxi fleet.
The Nissan NV200 Taxi will be produced in North America at Nissan's manufacturing facility in Cuernavaca, Mexico. Total manufacturer suggested retail price (MSRP) of the vehicle, with all planned standard features, will be approximately $29,700.