It's highly versatile, with a remarkable amount of interior space: the innovative TRIXX small-car concept that Opel is presenting at this year's Geneva Motor Show (March 4 – 14). This ultra-compact city car can carry up to three adults and a child, or as a one-seater various bulky loads. Three electrically powered ‘pantograph' doors, two on the passenger's side and one on the driver's side, enable very easy access and loading. The TRIXX has several other ingenious ideas lined up as well – an inflatable rear seat; a foldaway front passenger's seat; and a roof hatch that opens at the push of a button and carries extra-long objects in an upright position.

A luggage rack at the rear pulls out like a drawer, and carries heavy items or those too dirty to travel inside. The 51 kW (70 hp) 1.3-liter CDTI turbo diesel engine also used in the Corsa and Agila powers the TRIXX. Martin Smith, Executive Director, Design: " The TRIXX shows our vision of an innovative, ultra-compact car in the three-meter-class, that features an expressive, exciting design and meets a variety of mobility requirements with its clever, highly versatile interior concept." 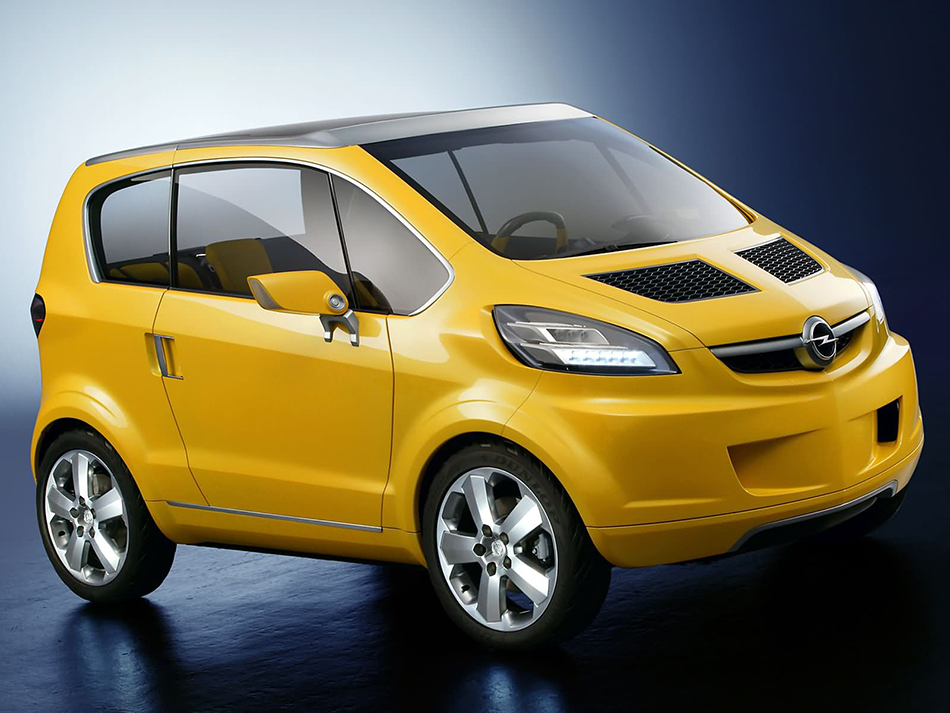 With a typically adaptable interior and compact dimensions (length x width x height: 3.04 x 1.66 x 1.57 meters) the front-wheel drive TRIXX is the ideal transport partner for all city dwellers. Thanks to the practical concept, it is capable of carrying two people and their luggage, three adults and a child, or the driver alone. The front passenger's seat folds away to reveal an unusually large trunk with a volume of 890 liters (VDA). The load-area length of 1.53 meters from rear to instrument panel is enough to carry a fully assembled mountain bike.

The front passenger enjoys a particularly comfortable ride with ample legroom by folding the front seat away and traveling on the couch-like rear seat. This seat too is concealed if not in use, or inflates in a matter of seconds via the on-board air compressor. If a small child is also traveling in the TRIXX, a child's seat folds down behind the driver's seat.

Bulky objects are loaded easily through the pair of electrically operated ‘pantograph' doors that open wide to the front and the rear. These doors have a supporting arm that lets them open parallel to the side of the vehicle, like sliding doors. The TRIXX therefore needs no tailgate, but the rear window lowers for additional access to the interior. In combination with the glass sunroof, the rear half of which slides forward, this provides a load-aperture similar to a pick-up truck. It is large enough to accept objects up to 960 millimeters wide, 430 mm deep and 1400 mm long.

The TRIXX features the bold lines, short overhangs, prominent wheelarch lips and crease in the hood characteristic of the Opel form language. Like the new Astra, the pronounced wedge shaped profile underlines the concept's dynamic appearance.