The 107, which replaces the 106, provides Peugeot's entry offer in the small car segment (B). Overall, this market segment has increased by 32% in ten years due to the many different vehicles offered by a large number of manufacturers. Peugeot has already seen success in this segment with the dynamic 206 and will build on this success with the innovative 1007.

Peugeot's new small car has been developed and built in collaboration between PSA Peugeot Citroën and Toyota Motor Corporation. The 107 is manufactured at the Kolin plant in the Czech Republic, like its "two sister cars" that share the same platform.

Style
For the design of the Peugeot 107, the brief required the use of a shared mechanical specification, the use of an existing platform and the same front windscreen and front doors for all three marques.

The Peugeot Style Centre set out to create a compact car, with an assertive character, versatile in use, but above totally at ease in an urban environment. The car therefore has very small front and rear overhangs, wheels placed "at each corner" and generously curved sections to give it presence. At the front, the 107 naturally exhibits the stylistic traits found on the latest Peugeots, with a youthful and playful face, expressed by a smiling "mouth" and wide eyes. 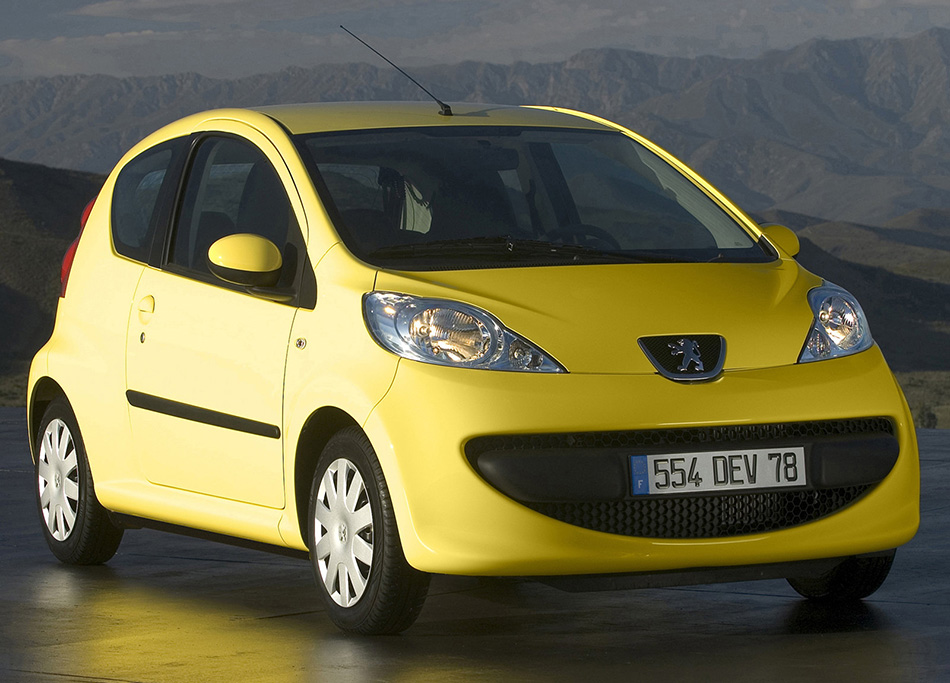 Viewed from the side, the 5-door version achieves a balanced appearance by the use of a "wraparound" rear door that completely covers the rear quarter panels as far as the vertical rear light. Each of these lights extends flute-like from the rear of the roof and descends to the bumper, framing the tailgate formed by the fully glazed rear screen. Inside, the interior layout creates an impression of quality thanks to the vibrancy of its different components, particularly the back-lit central console activated when the lights come on at nightfall. Interior cloth trims specific to each Marque decorate the interior of the car.

A "magnetic" smile
Compact and user-friendly, a mite cheeky but with a genuine smile, the 107 invites you to share its infectious joie de vivre… Its appearance radiates the feline character specific to the Peugeot Marque, with expansive almond-shaped headlamps, a wide mouth, and a large, inclined front windscreen, not forgetting the large, rounded, vertical rear lights that frame an all-glass tailgate.

Its "measured" non-conformism presents a mix of innovative lines, stylistic references and original curves. The lower front panel, featuring body-colour paintwork on all versions, demonstrates that character and simplicity are not mutually exclusive. Far from being the entry point to the Peugeot range, the young and sparkling 107 is, on the contrary, a breath of fresh air.

Attuned to the city Its preferred playground is the city. Those who commute there, who park there, who while away the time there – often dreaming of escaping from its clutches – will be very appreciative of its smile, its roguishness and its versatility, features that are prominent on both the 3- and 5-door versions.

The 107 equals 3.43 m of city delight!
Being 25 cm shorter than a 106, the 107 is one of the most compact 4-seater saloons on the market. Its width of 1.63 m easily accommodates its occupants, while at the same time allowing them to thread in and out of traffic. Its height of 1.465 m contributes to the overall stylistic balance, whilst ensuring excellent headroom.

Thanks to a generous wheelbase of 2.34 m, the driver's seat is placed well forward, offering good all-round visibility enhanced by the microscopic overhang and the "four-corner" wheels. Rear-view vision is good too, thanks to a generous rear screen with a rear windscreen wiper as standard and large door mirrors, adjustable from the interior, that allow the driver to keep an eye on following traffic.

Handling
A small car with reduced overhang, the 107 benefits from a turning circle of less than 10 m. This easy urban manoeuvrability, combined with the flexibility of electric power steering, makes the 107 particularly easy to handle.

Tailor-made engineering …
Well able to thread its way down a narrow street, make light of traffic jams, saunter at low speed or make a dash for the countryside, the 107 comes with three power trains ideally suited to these requirements. Placing emphasis on dynamic performance and the ability to negotiate traffic, they also perform well on the open road, whilst reducing fuel consumption and CO2 emissions to a minimum.