The Alpine A110 was unveiled at the Paris Motor Show in 1962.  The new vehicle featured the steel backbone frame, glass-fiber polyester bodywork and offset rear-mounted engine of its illustrious predecessor. It also used parts from Renault production models, particularly the R8. It was thus a powerful and efficient model, featuring all the improvements made to Alpine models over the years. The Alpine A110 did, however, feature one innovation: the 4-cylinder Renault engine with 5 bearings. To make room for it, the rear end of the vehicle had to be made bigger. This gave the A110 an "aggressive" style that remained its hallmark. 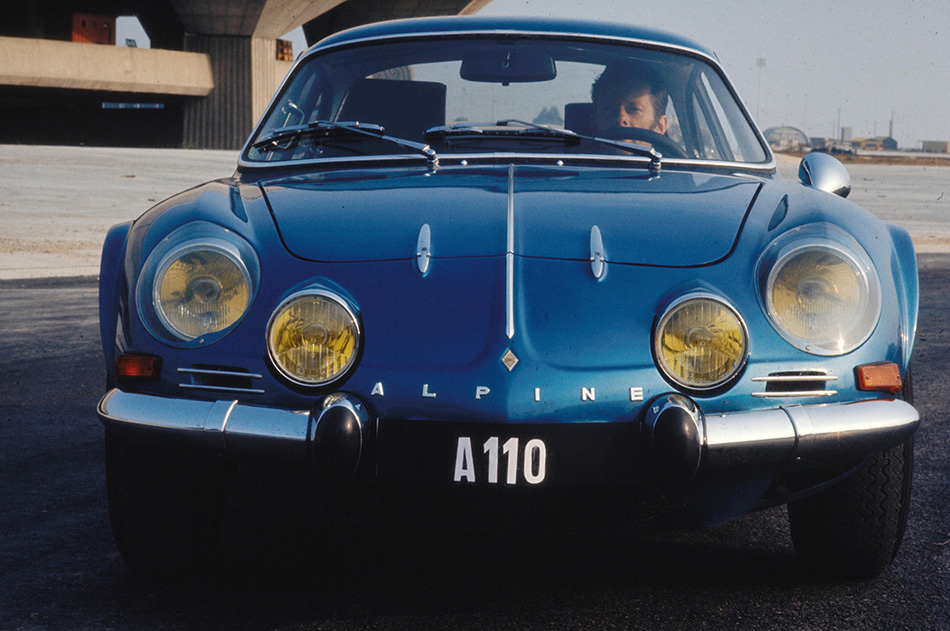 The A110 was a motorsports vehicle that was also available to amateur drivers looking for thrills. Even so, there was no question of adapting the new Alpine to urban or family use. Drivers, be they professionals or amateurs, had to shoehorn themselves into the minuscule cabin and squeeze their legs into the tunnel as best they could. Only then could they experience the joys of driving this lively sports model!

The A110 made its mark in international events right from its debut. In 1970, Alpine dropped endurance and Formula 3 racing to focus exclusively on road events. This proved to be the right decision. In 1973, the A110 was at the height of its powers, dominating the World Rally Championship in 8 events out of 13. It even notched up 2 one-two-three victories, at the Monte Carlo Rally and the Tour de Corse in Corsica!
It has to be said that with its successive engines, each one feistier than the last, the A110 could easily reach a top speed of 220 kph. The car's performance and competitive edge were continuously honed throughout its career. In 1975, the Alpine A110 1800 (again designed for motorsports) was the last upgrade to come off the lines at the Dieppe plant. The Alpine A310 was already waiting in the wings.