Renault unveils an innovative approach to compact cars with a world-first at the 74th Geneva Motor Show. The MODUS show car previews the vehicle Renault plans to launch in autumn 2004 as an alternative to the traditional B-segment hatchback, and a complement to Twingo and Clio. Similar in size to Clio, MODUS boasts a surprising amount of cabin space for such a compact car and a pleasing personality that is hard to resist. Its roominess and equipment will position MODUS just above Clio. Its main characteristics are its one-box architecture and innovative functions and features, previously reserved for higher segments, with improvements to safety and driving pleasure in particular. This versatile car is as much at home around town as on the open road.

A distinctive and likeable personality

MODUS' design clearly sets it apart from Twingo and Clio. Its exterior is modern and original, with a cheery front and streamlined profile. The vast glazed area immediately hints at the exceptionally roomy interior. The flush-fitted 17-inch wheels and accentuated arches denote sturdiness and stability. As for colour, MODUS comes in a unique Ice Blue with body-coloured front and rear bumpers.

The line that runs along the side of the car from the door mirrors to the door handles and as far as the tail lights emphasizes MODUS' flowing silhouette. The rounded bonnet along with the seamless transition from the top of the wing to the A pillar and up to the roof add to the one-box feel. 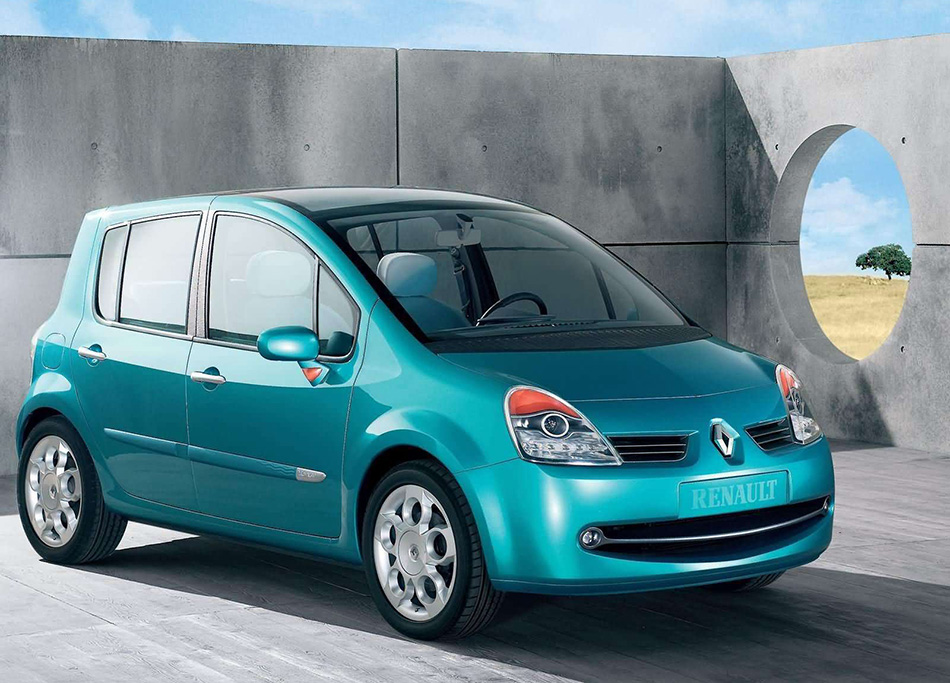 The Renault brand identity is clearly in evidence thanks to the vertically positioned logo, set into the radiator grille. At the rear of the car, the logo is centrally positioned above the MODUS badge.

A subdued and welcoming interior

MODUS' interior confirms the airiness suggested by its exterior. The translucent roof and cab-forward windscreen accentuate the feeling of space. The vast glazed area means MODUS' interior is as bright as that of a higher-segment MPV.

MODUS invites passengers into a welcoming atmosphere. The design team paid particular attention to the choice of materials, fabrics, colours and mating surfaces, and to how each element fits into the overall environment. Softness prevails, from the leather-covered instrument panel to the soft-touch paint finish of the central facade. The interior plays on contrasting moods and colours: the bottom of the instrument panel and the door interiors are covered with a light grey leather, while the dashboard cowl and the gear lever knob have a stronger medium grey leather.

This landscape stretches over every centimetre of MODUS' upholstery from the start of the seat cushion to the top of the head restraint. A smooth transition from seat to floor is ensured as the pattern on the cushion "overflows" onto the mottled carpet. In a similar vein, the translucent roof acts as a continuation of the sky print on the head restraints. MODUS' occupants travel with their heads in the clouds and their feet on the ground! This visual effect continues on the door panels to add to the sensation of cabin space and the panoramic view. This, and the translucent roof, imply an openness to the outside world.

The "shared" instrument panel can be seen by all occupants. Its streamlined design contrasts with the sometimes overloaded instrument panels of classic hatchbacks. Its flowing curves reinforce the welcoming warmth of the interior as a whole while information is centrally concentrated around the smooth dash cowl. Technology is sober and discreet; the LCD display lights up in blue against a black background to echo the Ice Blue bodywork and also for maximum clarity. The satin-finish chrome dial surround echoes the steering wheel finish, the rim around the gear lever bellows, the door handles inside and out, the handbrake knob and the vent controls. The automatic climate control, central-locking control and 4x40W CD player are clustered together in the lower section of the instrument panel.

Exceptional living space for such a compact car

The sensation of space inside MODUS is surprising given its seemingly compact exterior. At 3,792mm long, MODUS rivals with classic B-segment hatchbacks and provides a record amount of cabin space for its category: best-in-class head room in both front and back, 226mm knee room in the back and rear elbow room of 1,345mm.

MODUS proves it needn't always be a struggle getting into compact cars. Its 1,589mm tall one-box architecture plus the narrow centre pillar and optimized door width make for easy ingress and egress.

MODUS sets a new standard in comfort and ease of use by enabling occupants to personalize their cabin space.

The main innovation is the "Triptic" split-fold sliding rear bench seat with a folding middle seat. It slides up to 170mm fore and aft with four possible positions and will accommodate two or three passengers as required. The two-seater configuration offers a choice of all four positions; in a three-seater configuration two positions are available. The switch from two to three seats happens in the third position: using the handle under the right-hand side of the seat, the two seats are separated and the central cushion folds down to form the third seat.

The side head restraints, which are wider than the central one, support occupants' heads in all configurations so that children and adults can adjust their seating position to suit their height and weight. This also adds boot space, just as the 60/40 split function and tilt and fold rear bench seat add to the roominess of this versatile interior.

Thanks to the split-opening tailgate the entire tailgate or simply the lower half can be opened; a practical solution when accessing the boot in confined spaces such as roadside parking when another vehicle has pulled up too close behind. This split-opening system is also useful when transporting smaller objects for which a fully-opened boot isn't necessary.

MODUS comes with "Velofix", its own specially-designed bike rack that is fitted and removed in just minutes. Folded away, it slips into the boot whatever the rear-seat configuration. Its attachment system is built into the rear bumper and chassis. "Velofix" will carry two adult bikes weighing up to 30 kilos.

More than anything, a one-box vehicle is expected to provide space and functions that will make life easier and more enjoyable for its occupants. MODUS goes further still by proposing key functions that until now were reserved for the higher segments. Its bright, welcoming and spacious interior and 115bhp 1.6 16V engine are an invitation to travel in town and on the open road.

MODUS aims to set a new standard for safety in its category. It guarantees excellent visibility both day and night and whatever the road conditions. The cornering lamps are an unprecedented innovation in this segment; a fixed lamp lights each bend to give increased peripheral vision. The self-adjusting double distance xenon lamps extend the driver's field of vision by gradually turning up the dipped beam to complement the high beam. Further equipment includes dual-reversing front wipers, a 1.32 sq. m. panoramic windscreen, and off-set door-mounted mirrors for increased forward visibility.

MODUS heralds Renault's offensive on the B segment

Renault is a key player in the European B segment, as shown by the popularity and appeal of its models. The launch of MODUS will extend Renault's B-segment range with an innovative car that is roomier than Clio and more versatile than Twingo. Its additional functions and bigger cabin space mean MODUS will be positioned slightly above Clio. MODUS will be instrumental to achieving Renault's B-segment objective to offer a car to match every customer's needs.