Renault Duster, a strong and reliable 4x4 with genuine off-road ability, will be on display at the Cairo Motor Show, Egypt, in June.

Renault Duster is a particularly versatile vehicle which combines a spacious interior with saloon-car comfort, while its compact footprint and high ground clearance ensure that it is as at home in and about town as it is on country roads or off the beaten track.

Renault Duster can be ordered with a 1.6 16V 105 petrol engine or a dCi 85 diesel powerplant, both of which have already showcased their qualities under the bonnet of numerous other Renault models. Both boast particularly thrifty fuel consumption:

Both the 4x2 and 4x4 versions of Renault Duster benefit from an affordable price tag, and the model will be available from June 2010 in Ukraine, the Middle East (Jordan, Syria, Lebanon and Egypt) and certain African countries. In terms of its markets and production sites, Duster has a global calling. Like Logan and Sandero, it will be available with either Renault or Dacia badging as a function of its different markets. 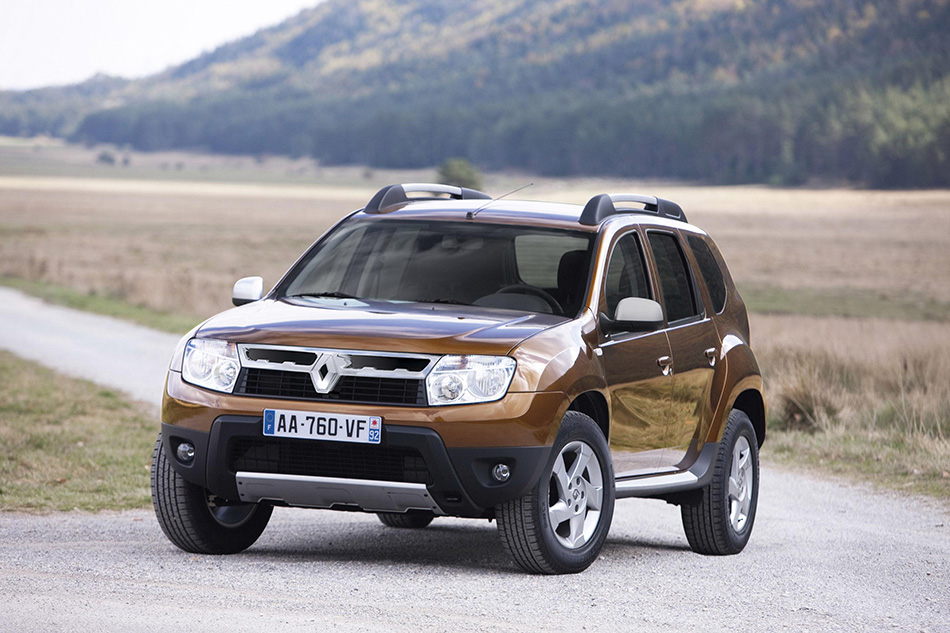 Renault Duster is unmistakably a 4x4. From the front, it exudes an impression of toughness: the wide wheelarches, the imposing lines of the chrome grille and the sump guard clearly emphasise the 4x4 DNA of Renault Duster. Seen from the side, the high ground clearance, clearly defined wheelarches and protective mouldings encourage the driver to tackle even the toughest roads and tracks.

Inside, the dashboard is modern, uncluttered and functional. Its design varies according to version, and several areas can be modified with different colours or surface finishes. Renault Duster introduces a new Brown trim, while a Leather Pack (seats, steering wheel, gear lever knob) is also available. Particular attention has been paid to its ergonomics to ensure that the controls are conveniently positioned and that driving data is easy to read: the well-placed, intuitive 4x4 control button is a perfect example of this.

Renault Duster was designed to cope with all types of road and track, all over the world. In order to meet these wide-ranging needs, Renault Duster will be available in both 4x4 and 4x2 form. The 4x2 version has been designed for customers who want good ground clearance and a reassuring elevated driving position, as well as loose-surface ability, but who don't have a real need for allwheel drive.

The strengthened underside of Renault Duster is suitable for loose-surfaces and all-terrain use thanks to:

Renault Duster is built on the B0/Logan platform which is widely acclaimed for its strength, reliability and durability.
At the front, the pseudo MacPherson-type suspension with wishbones is identical to the layout employed by Logan and Sandero, although strengthened for off-road use. At the rear, the 4x4 version's rear multi-arm arrangement was specifically developed for Renault Duster, while the programmed-deflection flexible H-beam favoured for the 4x2 versions is strong and permits a large boot, which is a key consideration for our customers. Both solutions deliver a comfortable ride and allow high ground clearance. To confirm Renault Duster's strength and reliability, Renault Duster covered the equivalent of four million kilometres in a wide range of climates and in particularly punishing conditions.

Renault Duster 4x4 is equipped with a new six-speed gearbox with a short first ratio (5.79kph per 1,000 rpm) which allows the vehicle to travel at very slow speed on uneven terrain, and improves performance as you pull away from standstill with heavy loads or on steep slopes. This simple, efficient and economical solution was favoured in order to meet the needs of Renault Duster customers.
The TL8 gearbox offers:

The 4x4 control located on the lower part of the centre console allows drivers of Renault Duster 4x4 to easily adapt the vehicle's configuration to their needs. This control permits three modes:

Renault Duster was designed to be as versatile as possible and to provide the driver and occupants with the same reassuring ride when it is driven in and about town, on trunk roads and motorways, or when taken off-road. Renault Duster also boasts a spacious, comfortable interior and a high standard of safety.

Despite its compact footprint, Renault Duster is a very spacious car, with five people able to travel in total comfort. Rear passenger headroom (seat cushion to roof) is 895mm, kneeroom is 183mm and elbow room amounts to 1,438mm, enabling it to comfortably seat three adults at the rear, where there is also ample space to fit child seats. Renault Duster's front and rear passengers benefit from the same amount of space as they do onboard Renault Logan. 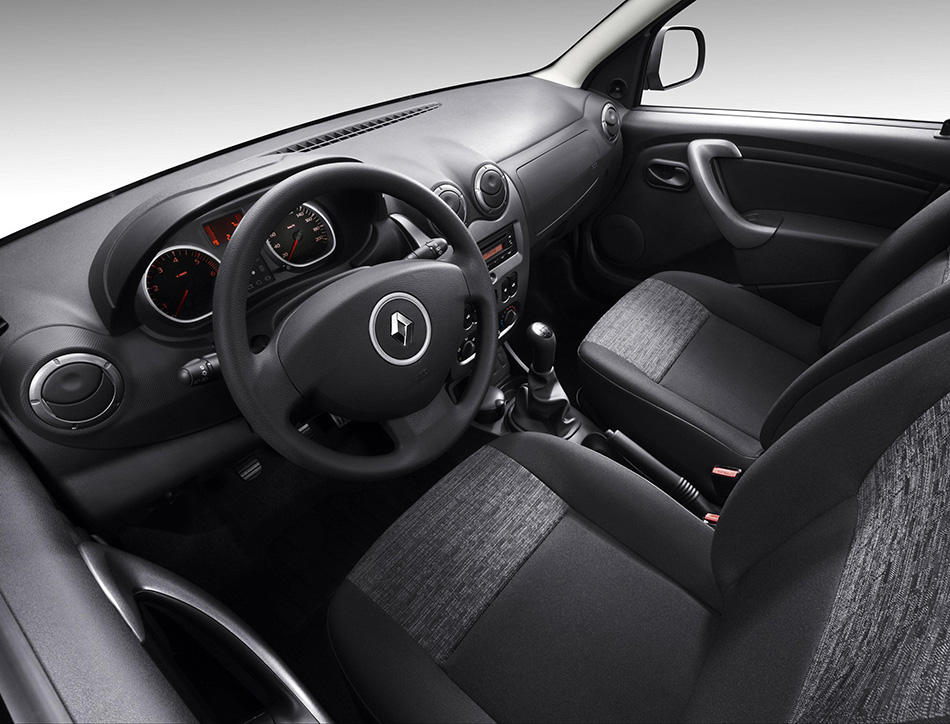 Depending on version, Renault Duster benefits from up to 475dm³ VDA of boot space, which is also very competitive. The practical, modular interior includes a folding rear benchseat, with a 60/40-split function available on certain versions. With the rear benchseat fully folded, carrying capacity is extended to up to 1,636dm³ VDA (depending on version).

Renault Duster's occupants will appreciate the high standard of travelling comfort it provides, whatever the type of road or terrain, thanks to its high ride-height (205mm in 4x2 version and 210mm in 4x' version) and specific work on its suspension (damper travel, springs and calibration). Comfort is further enhanced by Duster's long wheelbase (2.67m) and big 16-inch wheels.

Drivers enjoy a reassuring, high-up seating position which gives them better visibility of potential hazard situations, while most versions are equipped with safe, precise power steering that delivers a good standard of driving pleasure. Depending on version, the driver's seat comes with height adjustability to help find the ideal position. Drivers are also pampered by the height-adjustable steering wheel (depending on version) and user-friendly steering wheel-mounted controls.

Thermal comfort has been engineered to meet the challenge of the world's most punishing climates. Particular care has been taken with the routing of ducts to ensure fast warm-up after starting in both extreme heat and extreme cold.

Renault Duster benefits from Renault's acclaimed expertise in the area of safety.

The 4x2 and 4x4 versions of Renault Duster can be ordered with either the dCi 85 diesel engine or the 1.6 16V 105 petrol engine, both of which have already proven themselves under the bonnet of numerous other models produced by the Renault group.
The two engines deliver the low running costs, strength and easy maintenance our customers seek.

Reliability and strength in the conception

Like all the vehicles based on the B0/Logan platform, Duster has been engineered to deliver the Renault brand's hallmark strength and reliability.
Particular attention has been paid to anti-corrosion protection thanks to several measures:

The 4x4 running gear uses tried and tested components, sourced from the Alliance (Nissan rear axle and coupling, new six-speed TL8 gearbox derived from the TL4 gearbox that has been wellproven in the Renault and Nissan ranges).

In order to underline its high build quality, Renault Duster is backed up by a warranty of up to three years or 100,000km in many of its markets.