The new Opel Astra GTC´s sculpted shapes with precise accents and dramatic proportions make it the ultimate expression of Opel´s design language. And on the road, all Astra GTC versions benefit from a premium front axle layout with HiPerStrut – High Performance Strut – that ideally combines with the clever Opel patented Watt's link rear axle to provide unmatched stability and the sharpest driving precision. Other innovations in the new Astra GTC include driver assistance systems based on the second generation Opel Eye front camera with expanded functionality and the new, fourth generation Bi-Xenon Advanced Forward Lighting (AFL+).

Unlike many three-door versions of existing compact hatches, the GTC will be a standalone model in Opel's range and the ultimate Astra in design and driving dynamics. It does not share any exterior element with other members of the Astra family, except for the outside rear view mirror housing and the rod antenna. Six of the seven 17- to 20-inch wheel designs on offer are also GTC-only features. 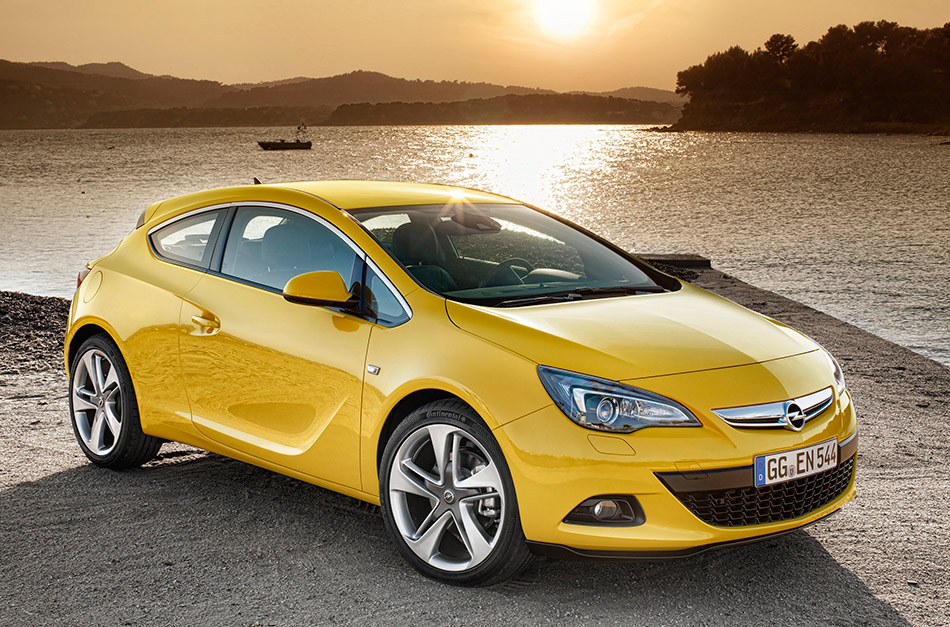 Also exclusive for the new Astra GTC is the panoramic windscreen. For the unique feature, which successfully made its production debut 2006 in the previous Astra GTC generation, Opel engineers filed a total of 11 patents during its development. The large panoramic windshield extends seamlessly from the hood up into the roof as far as the B-pillar. With no cross-member to spoil the view, it offers driver and passengers a unique driving experience and a completely new sense of space and visibility with an almost unlimited field of vision, similar to the view from a jetplane cockpit.

"We wanted the Astra GTC to be the ultimate expression of Opel's design language ‘sculptural artistry meets German precision' and to embody our passion for the automobile," says Mark Adams, Vice President, Opel/Vauxhall Design. "However, we did not want emotion to overshadow functionality: the Astra GTC is a clever and affordable dream car."

In profile, the designers have maximized drama by limiting the amount of lines: just three create tension and sculpt the shape of the Astra GTC. A fine, crisp line that sweeps downward from the front door to the bottom of the rear fender and energizes the body side, the Opel signature blade is introduced in the same direction as in the Insignia. A second line encapsulates the door handle and stretches to the rear, emphasizing the GTC's dramatic stance by spreading the surfaces to a fine undercut and a broad shoulder. The third line following the clean, sporty silhouette of the roof is finished in chrome and accentuates the window graphic, which guides the eye to the sharply integrated spoiler.

The clean front features Opel's typical centerline crease and is accented by intense, slim eagle-eye designed headlamps featuring "wing-shaped" daytime running light graphics. These act as parentheses around the refined chrome emblem bar and the separate, dramatic trapezoidal grille, which is placed lower for a race track feel that hints at a sporty character.

The shoulder section is the most dramatic area of the Astra GTC. Its powerful design gives the car imposing proportions and a very purposeful road presence in highlighting its low, wide road-holding stance. The line from the C-pillar slides into the tail and curls around into the rear spoiler, which is ingeniously integrated into the continuing roof line. Optional LEDs highlight the stretched "wing-shaped" motif of the tail lamps.

Much of the development centered around the introduction of Opel's HiPerStrut to the GTC, a first for an Astra model. Ideally adapted to the compact coupé, it offers improved handling characteristics and more direct steering response as preferred by sports car drivers. Based on the system currently seen on the Insignia OPC, the HiPerStrut uses the Astra's existing pick-up points, but reduces the kingpin inclination angle by 44 percent and shortens the spindle length (kingpin offset) by 46 percent versus the MacPherson strut-equipped models. This helps prevent torque steer – a trait of many powerful front-wheel-drive cars – allowing drivers to make more use of the GTC's performance without the steering being corrupted.

Adding the HiPerStrut has also reduced the amount of camber change on the GTC's front wheels during cornering, improving grip. Steering feel is enhanced, too, helped by a reduction in the steering system's friction levels. The geometry changes brought by the HiPerStruts also mean that the GTC can be fitted with wheels up to 20 inches in diameter.

The Astra's GTC compound crank/Watt's link rear suspension system has also been revised, with bespoke roll-stiffness and roll-center height settings for this application. The system has many advantages over a modern multi-link design, including improved packaging, greater wheel camber stiffness and reduced suspension friction. The Watt's link also ensures that lateral stability is maintained at all times.

The Watt's link is carried on a small cross-member attached to the underside of the car, just behind the rear wheel center line. It comprises a short, pivoting center link with a ball joint at each end, to which the lateral links from the wheels are bolted.

In a straight line, the set up ensures excellent stability, but during cornering it minimizes lateral deflection in the same way a modern multi-link system would do. The linkage absorbs around 80 percent of all lateral loadings on the rear suspension. In addition, the Watt's link allows for softer bushings, which no longer have to compensate for toe changes at the rear of the car, and thus provide greater compliance and ride comfort from the rear axle.

Precision, Feedback & Confidence. These were the three target elements for the GTC's tailored steering program. The challenge was to maintain the system's ease of use at lower speeds, but dial in a greater degree of involvement and slightly more effort at higher speeds. The Astra GTC uses a rack-and-pinion steering system with speed sensitive assistance. But in order to provide drivers with more steering feedback, the system's electric motor is mounted directly on the steering rack, as opposed to the base of the steering column.

The key benefits of using electric power steering (EPS) are well known. At low speeds, the level of power assistance is increased to minimize steering effort. At higher speeds, assistance is automatically reduced to ensure a high degree of steering feel for the driver. The second important benefit is that, because it does not require an energy consuming hydraulic pump and responds directly to the amount of power needed at any speed, fuel consumption is also reduced.

The upgraded 2.0 CDTI common-rail turbo diesel engine with output raised to 121 kW/165 hp is fitted with a diesel particulate filter and a six-speed manual transmission. Opel's new Start/Stop technology which reduces fuel consumption in urban stop and go traffic is standard equipment. The 2.0 CDTI combines excellent performance with high efficiency. It delivers up to 380 Nm of torque thanks to an overboost function and allows the Astra GTC to reach 100 km/h in 8.9 seconds. Top speed is 210 km/h. The combined fuel consumption does not exceed 4.8 liters of diesel per 100 km and CO2 emissions are 127 g/km. With its 56-liter fuel tank, the Astra GTC 2.0 CDTI can cover over 1,100 km.

All engines come standard with six-speed manual transmissions. Six-speed automatic transmissions will be available with the 1.4 turbo gasoline engine and the 2.0 CDTI common-rail turbo diesel as of early 2012.

The new Astra GTC is also in the top compact coupé league when it comes to driver assistance systems. The second-generation Opel Eye front camera with expanded functionality available for the Edition and Innovation versions plays a key role here. The enhanced Traffic Sign Recognition can identify even more of the traffic signs used in the EU and can now also recognize rectangular signs, e.g. Autobahn, traffic-restricted zones and speed limit-related add-on signs. In addition to the familiar Lane Departure Warning (LDW), the camera now also supports a new Following Distance Indication function (FDI) that visually informs the driver about the distance to the vehicle ahead.

The new, fourth-generation Bi-Xenon Advanced Forward Lighting (AFL+) has been fitted to the Astra GTC. In addition to the nine functions from AFL+ – which include a High Beam Assist that switches the high beams on and off depending on the presence of other vehicles – it can be enhanced with an Intelligent Light Ranging system (ILR) that uses the front camera from the Opel Eye to measure the distance from the vehicle ahead and adjust the headlamp low beam pattern. This allows it to continuously optimize roadway illumination without blinding. With these ten functions, the Astra GTC features the best lighting package in the segment.

Compared to its competitors, the Astra GTC does not compromise on functionality despite its coupé-like design. It does not only accommodate five persons in its cockpit, its flexible luggage compartment also provides 380 to 1,165 liters of space – over 100 liters more than the competition. The storage volume in the cockpit has been improved by 50% over the previous generation GTC, also thanks to the electric park brake that frees up space in the center console – exactly where storage is the most accessible.

The design of the Astra GTC high quality cockpit combines sculptured shapes and dynamic lines, and its distinct sporty character is enhanced by new fabrics, colors and decors on both the Edition and Innovation executions. The standard sport steering wheel with enhanced grips also highlights the GTC's exciting character.

To fit all kinds of drivers, the front seats in the Astra GTC offer the widest range of adjustments in the segment. Ergonomically enhanced front seats with eight-way adjustments, four-way lumbar and upper leg extension, certified by the independent back health experts from the AGR organization (Aktion Gesunder Rücken - Action for Healthy Backs) are an accessible option.