The cross-channel trip that took place on July 26th, 2006 from the British port of Dover to the French town of Sangatte was certainly an adventure. It was also the fastest ever crossing of the world's busiest waterway by hydrofoil car. In the time of 193 min 47 sec, pilot Frank M. Rinderknecht, boss of the Swiss design company Rinspeed set a new world record. "It was like a giant slalom on an alpine mogul piste. The only difference was that it was not flexible poles we had to get round but enormous tankers and container vessels," said Rinderknecht, thrilled at getting into the Guinness Book of Records. A hard hit of a big wave in the first third of the journey caused a yet unknown defect which considerably slowed down the top speed fort he rest of the passage. But to give up was not an option, the cross and get to France was the determined goal". 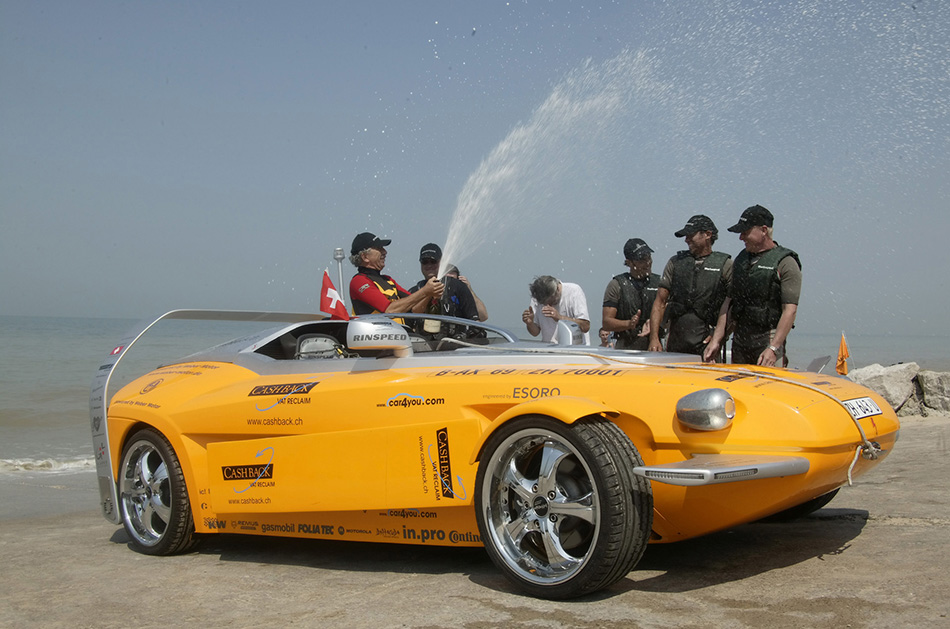 The world record was broken in the Rinspeed "Splash" - a completely new concept in amphibious vehicles which had already caused a sensation at the Geneva Motor Show in 2004. Whereas "normal" amphibious cars displace the water like a boat and therefore bear some resemblance to a bathtub, the "Splash" skims over the water on extendable wings like a hydrofoil. Rinderknecht: "We crossed the busiest waterway in the world as if on a surfboard."

Thanks to the generous support of Cash Back, the specialist for the simple recovery of foreign VAT on travel or show related expenses, foreign supplier bills and inter company expenses the ambitious project was prepared over a period of almost two years.

It took a great deal of effort to convert the original "Splash" into the present offshore version, so Rinspeed took on board the Swiss engineering specialists, Esoro, and one of the world's biggest plastics producers, Bayer MaterialScience. With their extensive materials know-how, the experts helped Rinspeed get the "Splash" fit for the high seas. The main design modification involved the wings, which had to be reinforced. To guarantee dimensional stability, the molds were cut from molded polyurethane foam.

The successful record ride over the waves was a tough ordeal not only for the pilot but also for the material. The 140 bhp, 750 ccm Weber Motor engine can take the "Splash" up to 80 kph, and at that speed even small waves feel as hard as rock. To supply enough power for the maiden voyage, WeberMotor supplied a brand-new version of its lightweight, low-consumption, environmentally friendly two-cylinder engine. This extremely compact power package produces 140 bhp/103 kW at 7000 rpm, and generates maximum torque of 150 Nm at just 3'500 rpm.

In theory, the 36 km or so between Dover and Sangatte would have taken just under half an hour but, says Rinderknecht, "I may be able to drive at that speed at home in Switzerland on Lake Zurich with no wind and the surface as smooth as glass, but not on one of the most difficult stretches of water in the world. But safety was always the prime concern."

With his arrival at the French town of Sangatte, he captured his entry in the Guinness Book of Records. Frank M. Rinderknecht was overjoyed: "We Swiss are not just good at making the tastiest chocolate; we can also build the fastest hydrofoil vehicle in the world – even though we're not exactly a seafaring nation …"