The 100EX is the first Experimental Car to be produced by Rolls-Royce Motor Cars since BMW Group became the custodians of the marque in 1998 and launched the all-new Phantom at the company's new home in Goodwood in January 2003.

Based on a lightweight aluminium space-frame, this open-top, four-seat, two-door drophead has been designed and produced to celebrate the 100-year anniversary of Rolls-Royce, which falls in May 2004. There is no plan to produce it as a series model.

Experimental models have long been a feature of Rolls-Royce, particularly between 1919 and 1957 when a number of motor cars were given the ?EX? name. Unlike a concept car, an experimental car functions more fully and was originally used by Rolls-Royce to test and evaluate new systems, components and features.

While the design of the 100EX and the choice of its special construction materials resonate strongly with Rolls-Royce tradition, both its aesthetic qualities and its technological content place it squarely in the 21st century. A strong nautical theme runs throughout, with bleached teak decking featuring both inside and outside the car. Polished aluminium also features heavily, particularly on the bonnet and windscreen surround, while the composite body is finished in Dark Curzon. 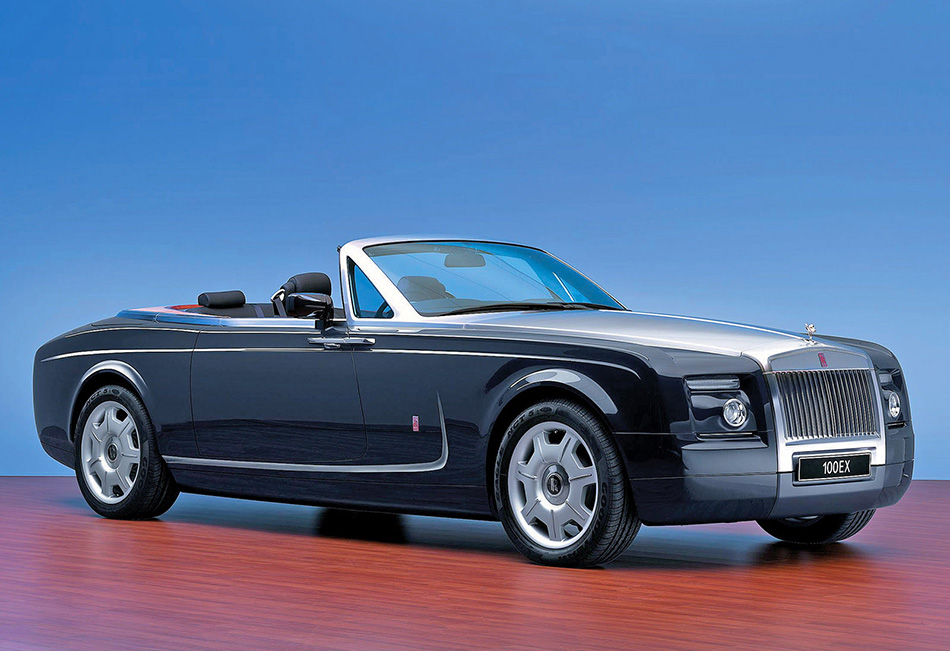 The design team that shaped the new Experimental Car was based in Southern California, at BMW Group's studio, Designworks, an entirely natural setting for a luxurious convertible. Here research was conducted into the Rolls-Royce design language specific to open-top motoring.

"The historical models proved to be truly inspiring," said Ian Cameron, Chief Designer for Rolls-Royce. "However, our search was for a design route which combined the brand's wonderful heritage with a cutting-edge 21st century character."

A number of designs were proposed with the ultimate choices progressing to the clay stage. After final selection, the build process began, this time at BMW's specialist design and build facilities in Munich.

Shorter than the Phantom by 165 mm (6.5 in) and 71 mm (3 in) lower, the 100EX has a graceful side profile with a characteristic dynamic rise in the waistline over the rear wheels and lines that sweep upwards towards the front of the motor car.

"We intended the silhouette to express the performance potential, yet reflect the effortless composure typical of Rolls-Royce design rather than the aggressive, forward-wedged stance of most modern performance cars," explained Exterior Designer, Marek Djordjevic. "Visually we wanted to build on the Rolls-Royce tradition of 'waftability', the sense that 100EX has the power to whisk its passengers swiftly to maximum speed in a truly relaxed manner."

To emphasise the bodylines, a polished aluminium waist rail surrounds the passenger compartment. Hand crafted, bleached teak decking has been chosen to feature both inside and outside the car, forming part of a strong maritime theme that runs throughout. On the exterior it forms a tonneau cover for the folded hood and features as an inlay in the polished aluminium door cappings. "The overall impression is intended to be of an elegant motor yacht at speed", adds Djordjevic.

At the front, a solid silver Spirit of Ecstasy sits on a progressively rakish version of the traditional Rolls-Royce grille, blending into the dramatic bonnet which has been milled from a single aluminium block and brushed to a high sheen. The windscreen surround and A-pillar, triangulated for exceptional strength, is also machined from solid aluminium.

The two coach doors of 100EX demonstrate the marriage of form and function throughout the car. They are large enough to allow exceptional access for rear-seat passengers, hinged at the rear in the style of many exceptional pre-war touring cars and like the rear doors of the new Phantom.

The tailored soft top is made from an advanced material that incorporates woven wire strands offering strength and all weather protection. The inside of the hood is lined with a wool/cashmere blend fabric. Painstaking design of the folding mechanism means the hood can be concealed in an extremely small storage area, keeping intrusion into the luggage space to a minimum.

The rear of the motor car tapers in a boat-tail style and the 'countryman' boot lid is split to give a drop-down lower tailgate. Teak decking extends across the boot floor, providing a table-like surface.

Interior Designer Charles Coldham explains, "We drew from the design of contemporary and classic yachts. The result is a thoroughly modern interior with an unmistakable nautical influence."

The chosen interior wood veneer is figured mahogany. Upholstery and trim are in rich Dark Curzon leather, while the flooring features the same bleached teak decking as the tonneau cover for the folded hood. 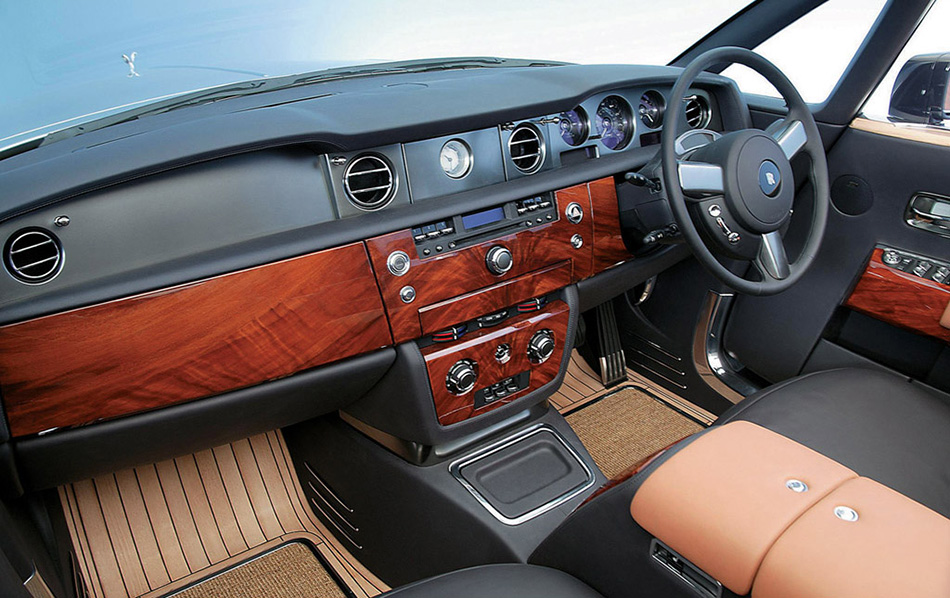 Specially-designed front seats are included, which are ultra-supportive but slender, allowing good legroom for rear passengers. The rear seat itself, while more intimate than that in the Phantom, is extremely accommodating for two people, with generous space devoted to passenger comfort, helped by the neat and space-efficient folding roof mechanism.

The team wanted to create a motor car that gave a 'shared experience', not something that was solely driver focused. "The cabin of the 100EX is as much a social environment as the new Rolls-Royce Phantom, but rather than shutting out the elements, they are embraced", explains Coldham.

As an experimental car, the 100EX is developed to a far higher level of engineering than a typical concept car. The body structure is a development of the new Phantom's aluminium space-frame, adapted to the different proportions of the 100EX, which is similar in width to the Phantom, but 165 mm (6.5 in) shorter and 71 mm (3 in) lower. The wheelbase is 100 mm (4 in) shorter.

The structure gives the 100EX immense strength and rigidity, something which is clearly vital for an open-top motor car. It also allows for coach doors to be selected, which are integral to the design of the motor car and offer the practical benefit of easing entry and exit. The polished aluminium windscreen surround, with its triangulated A-pillar, is effectively an exposed part of the space-frame structure, which provides excellent roll-over protection.

Suspension and steering geometry are shared with the new Phantom: double wishbone front and multi-link rear axles, with air springs, and rack and pinion steering. Wheels are finished in Meteor Silver, with a 21-inch diameter, and shod with 255/50 tyres at the front and 285/45 at the rear.

100EX is powered by a 9-litre V16, 64-valve engine. Natural aspiration was chosen over turbo or supercharging to give the instant, yet perfectly smooth style of pick-up which has so impressed in the Phantom. Drive is delivered through a six-speed automatic gearbox.

Experimental manufacture of motor cars and engines has long been a Rolls-Royce tradition. In 1919 the 1EX was produced, based on a Silver Ghost chassis. It was the first in a long line of EX cars that spanned almost 40 years, ending with the 45EX in 1958.

It was the larger cars, like the Silver Ghost and the Phantom, which were given the 'EX' denomination while the smaller experimental models were given the letter 'G', standing for Goshawk.

Many notable EX motor cars were made. These include 15, 16 and 17EX, which were based on the Phantom chassis and, in 1927, given to coachbuilders Hooper, Barker and Jarvis, respectively, in a competitive quest to produce a lightweight Phantom sports model.

In 1930 Henry Royce began a project to develop more powerful engines with even greater refinement. He contemplated building a 16 cylinder engine, but settled on V12 configuration, as being half way between a six and 16 cylinder engine which, at the time, he considered the two ends of the possible spectrum for Rolls-Royce motor car application. Up to this point the Phantom I and II were powered by straight six cylinder engines.

It is with these important cars in mind that Rolls-Royce Motor Cars has created a new 'EX' to represent the pinnacle of engineering and coach-building beauty for the 21st century. It is possible that in the future, as was the case the original EX motor cars, elements of the technology featured on the 100EX could be developed for new Rolls-Royce Motor Cars projects.

Throughout 2004 there is a full calendar of events in place to mark the centenary of Rolls-Royce, and the 100EX will appear at many of these as part of the year long celebrations.