101EX is the latest experimental model to come from Rolls-Royce, hand-built to explore a design direction for a modern coupй. Following the same uncompromising approach employed for the Phantom, the new car is an engineering-led design wrapped in a sleek, rakish coupй body.

The 101EX shares its state-of-the-art, lightweight, aluminium space frame chassis technology with the other Rolls-Royce models, albeit in a body that is shorter overall. Power comes from the Phantom's advanced, direct-injection, 6.75-litre V12 engine, which delivers unstressed, effortless performance.

Currently there are no plans for 101EX to be put into production. It is an experimental car that explores future design directions, a showcase for the innovative design and high-tech architecture that pervade the quintessential modern Rolls-Royce car.

The handsome, low-slung body of 101EX has been created by the Rolls-Royce design team under the direction of chief designer Ian Cameron. While the space frame technology has been borrowed from the Phantom, 101EX is shorter and lower than that model: the wheelbase is 250 mm shorter and overall length is down by 240 mm. All body panels, therefore, are new. 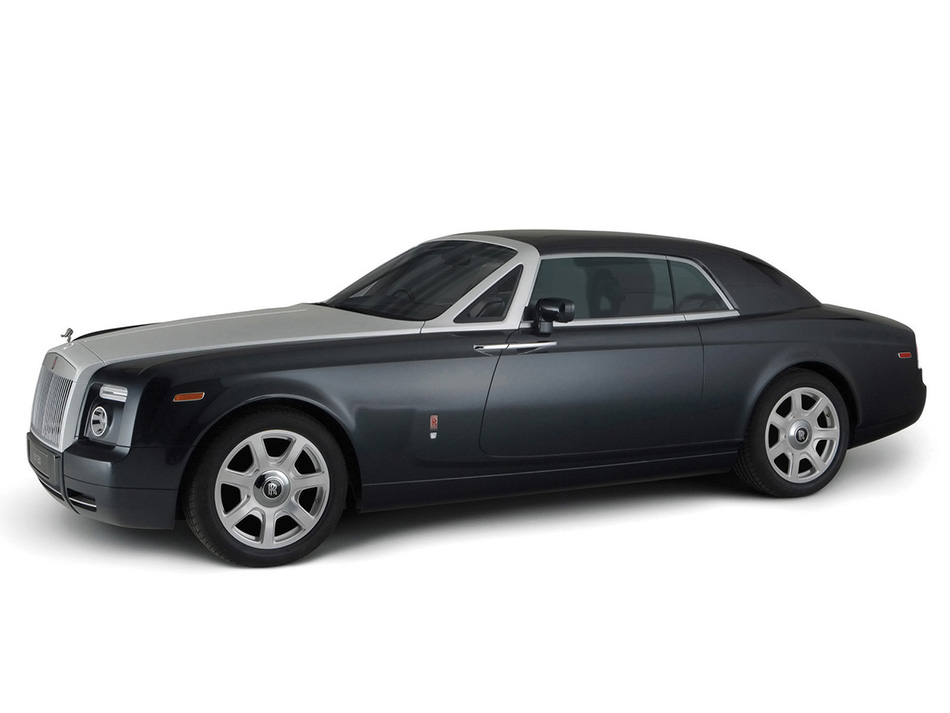 101EX is powered by the same 6.75-litre engine as the Phantom. Using advanced direct fuel injection with variable valve lift and timing, the V12 combines power with outstanding combustion efficiency. Designed to develop massive low-down torque, it delivers 75 per cent of its maximum pulling power at just 1000 rpm, giving the smooth, unstressed performance associated with Rolls-Royce.

The unique exterior design features a discreet, streamlined grille, complete with Spirit of Ecstasy mascot, that flows seamlessly back into the aluminium bonnet and windscreen surround. LED sidelight and direction indicators complement the round xenon driving lights.

Long, elegant coach doors, hinged at the rear, allow easier access to the 101EX interior than conventional front-hinged doors and add considerably to the handsome profile. Each door closes at the touch of a button.

New seven-spoke, 21-inch, forged aluminium wheels are used on the car, making them as tough and as lightest as possible.

The cosseting 101EX interior has been designed for elegance and maximum comfort for all of its occupants, featuring machined aluminium, the finest leather and exquisite rosewood and red oak veneers. Even the side and rear windows have wood surrounds.

"The interior uses traditional materials in a modern way," says Alan Sheppard who, together with Charles Coldham, was responsible for the car's interior design. Front slim-line, bucket-style seats offer outstanding comfort. Rear seating is exceptionally spacious for a coupй, with privacy ensured by the sweeping C-pillars.

"101EX is a response to the interest expressed by current and potential Rolls-Royce clients in a coupй," says Rolls-Royce chairman and CEO Ian Robertson. "It is an experimental car only, but one designed and engineered to a high standard. It radiates refinement, performance and presence."

It is the company's second experimental car in 24 months, following 100EX, which was seen at Geneva in 2004 and marked the company's Centenary. "It shows that Rolls-Royce continues to operate from a position of strength, and that we are keen to explore new directions for the brand," adds Robertson.

Rolls-Royce's first experimental car, 1EX, was built in 1919 and based on the Silver Ghost.

The styling of 101EX is more driver-focused than that of the longer Phantom. According to Ian Cameron, "It is a less formal car, more streamlined, more about the individual."

"The Phantom is an awesome driver's car, a vehicle that has amazing performance and handling with exceptional refinement, whilst the styling accentuates the spacious cabin - it is a luxury saloon, after all. 101EX is dominated by its long bonnet and the inherent power of the V12 lurking beneath. The cabin, although still spacious, is more intimate and the exterior styling reflects this," explains Cameron.

"It is a very modern car, a 21st century design that respectfully nods to the past but focuses indisputably on the future."

The roofline is lower than the Phantom's and the glass area shallower. The streamlined styling extends to the famous grille, which is discreet and slightly reclined. "The whole shape is dynamic. It sits low to the ground and has tight proportions," says Cameron.

In contrast to production Rolls-Royce cars, 101EX's body is made of carbon-fibre composite, albeit over the same lightweight aluminium construction seen in the Phantom. The bonnet and windscreen surround are finished in brushed aluminium, while the door handles and large, oval exhaust tail pipes are hewn from solid aluminium.

The elegant, rear-hinged coach doors are unique to Rolls-Royce. The driver and passengers step in rather than fall in backwards, as demanded in a conventional two-door coupй. The doors close automatically at the touch of a button. Grab handles are ideally placed in the rear to assist exit.

For a contemporary look, straight-grained rosewood and red oak veneers are used. This handsome polished wood is also used to frame the windows in a modern interpretation of a coach-built tradition.

The waistline of the car is high, accentuating the cocoon-like nature of the cabin and the car's strength and safety, yet the frameless doors and pillarless body give excellent visibility. The four seats are elegant and simple. Front bucket seats are leather-upholstered, richly padded but slim. They are noticeably contoured to offer superb support.In the rear is a cosier interpretation of the Phantom's lounge seat, a curved sofa that Sheppard describes as "intimate for two yet superbly comfortable on long journeys".

Phantom-derived ‘boulevard lighting' provides a hospitable glow at night. In addition, the extraordinary ‘Starlight headliner' uses fibre optics embedded in the leather headlining to give the impression of a star-filled night sky. Controlled by a dimmer, it can exude a soft glow or be raised to reading-light levels.

"The car is a technological tour de force, reflecting the extraordinary engineering offered in the production Phantom," says Ian Cameron. "Yet, as with the Phantom, there is a real sense of the human involvement - the hand-crafted nature of every Rolls-Royce which gives each one a personality of its own."

Like the Rolls-Royce Phantom, 101EX uses state-of-the-art technology. It is a no-compromise, engineering-led vehicle, developed to a much higher level than a typical concept car

"Only the finest systems, materials and engineering ideas can go into a Rolls-Royce car," says Helmut Riedl, Rolls-Royce director of engineering. "This is the philosophy behind all of our products."

Accordingly, 101EX abounds in examples of engineering excellence. The space frame chassis offers an unmatched combination of high strength and minimum weight. The Rolls-Royce coach-door philosophy facilitates graceful entry and exit. In addition, the space between 101EX's double floors allows for the wiring harness and other components to be routed away from the cabin, improving insulation and refinement.

The V12 engine is made from aluminium. It uses four valves per cylinder and twin camshafts per cylinder bank, and features fully variable valve-lift control and variable valve timing. This most advanced of V12 engines also employs direct fuel injection, to improve performance and fuel efficiency. At 1000 rpm, the engine is already producing just over 75 per cent of its peak torque figure.

The electronically-controlled, six-speed automatic transmission features ‘shift by wire' technology, so there is no mechanical linkage to the gear selector.

The front suspension uses double wishbones; at the rear there is a multi-link system. Air springs offer unmatched comfort and automatically adjust according to the vehicle's load.

"Exactly the same engineering attitude that was behind the innovative Phantom has been used for 101EX," says Ian Robertson. "It is a no-compromise approach using what is ideal, not what is convenient. In 101EX you will find a marvellous blend of high technology and craftsmanship - of engineering and personality. A blend that has put Rolls-Royce Motor Cars back at the pinnacle of motoring."