With the Swift, Suzuki began the first phase of its world strategy and gave undiluted form to the attribute that was the theme of the first phase: sportiness.

The Swift won awards around the world by virtue of its superior dynamics and design. Suzuki subsequently pursued sportiness in the Grand Vitara and SX4, and both cars enjoy enormous success.

The Splash is making its world debut at the 2007 Frankfurt show and will become the first model in the second phase of Suzuki's world strategy. In this phase, the theme is families. Having focused on sportiness in the first phase, enhancing Suzuki's image in the process, Suzuki is now building upon what they have already achieved while refocusing on its main traditional strength: family-oriented user-friendliness. The next model coming after the Splash is the next-generation Alto, which combines environmental compatibility with agility.

The D-segment initiative which is now being revealed represents the beginning of the third phase of the world strategy. The main objective of this phase is status. The brand has developed to such an extent that it's able to communicate status, and Suzuki has overcome the great challenge ofmaking cars that give their owners a feeling of status. 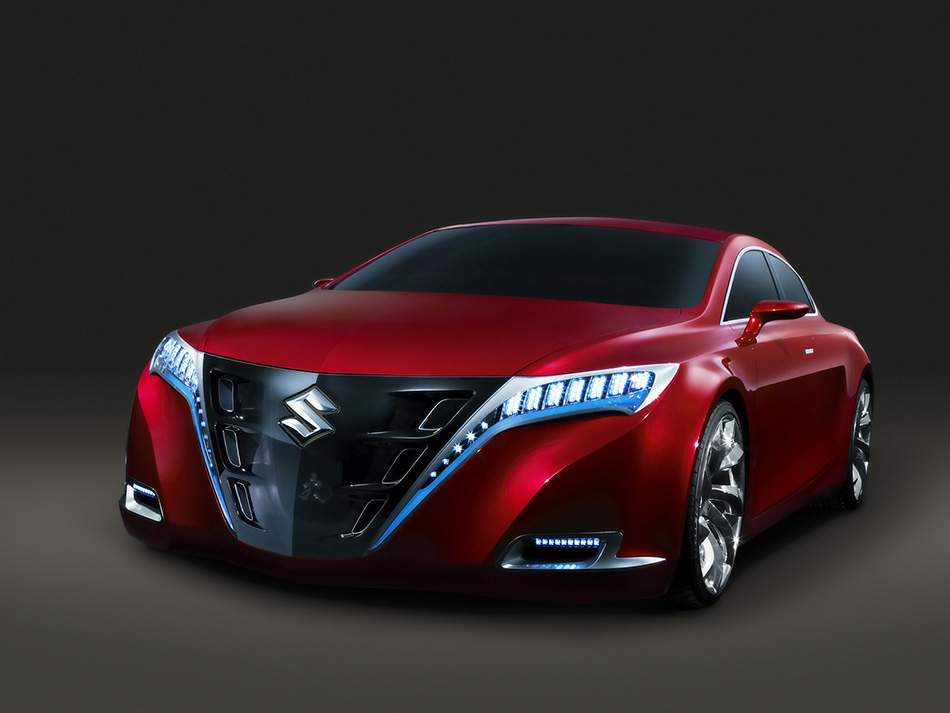 Why is Suzuki Entering the D-Segment?

Under the mid-term five-year plan, Suzuki is targeting sales of 3 million units in fiscal 2009 (the last year of the plan). The Japanese carmaker achieved consolidated sales of 3 trillion yen in fiscal 2007, meaning that the company is close to a mid-ranking position in the worldwide motor industry.

But despite the progress, Suzuki has not been able to accommodate many of the customers who have expressed a desire to stay with the automaker when purchasing subsequent, larger cars. Suzuki has entirely owed its customers for the growth since its founding in 1909. The carmaker feels obliged to respond to increasing expectations and is convinced that it's essential to offer a wider product range in order to accommodate customers' diverse lifestyles. Consequently, Suzuki has decided to expand its lineup to cover all segments from A to D in the next few years. Suzuki's first-ever D-segment car will stand at the top of the range.

Another major factor behind the D-segment entry is to more fully exploit the high level of Suzuki's technological competence and thus enhance its brand image.

Suzuki realizes that there's no point in entering the D-segment unless it can offer new value that can't be given by any of the existing brands.

Suzuki paid close attention to the fact that the D-segment is broadly divided into two parts. In one part, there are family-oriented cars that are relatively large and reflect an emphasis on cabin roominess. In the other part, there are entry luxury cars that reflect an emphasis on performance, are relatively compact, and offer relatively high levels of quality and prestige. The new value that Suzuki intends to provide will not belong to either group.

Suzuki's Way of Life! brand slogan is based on five elements: straightforward, value, sporty, spirit, and excitement. The words straightforward and value reflect Suzuki's ability to offer products that are sensible and worthwhile. The words sporty and spirit reflect the emotional appeal of its products. And the word excitement expresses the core factor that Suzuki delivers to customers through all products. Among these factors, value (in other words, a level of customer satisfaction higher than the expected from products' prices), is an inherent virtue of Suzuki cars.

It might be argued that all existing D-segment cars whose affordability is a selling point are chosen by customers because they offer a good balance of pricing on one hand and the rational factors of equipment, driving performance, and cabin roominess on the other. But the Suzuki D-segment car will be different.

For sportiness, the car's dimensions need to reflect a priority on performance. So while ensuring the cabin roominess that is essential in the D-segment, the car is as lean as possible. And with regard to design, Suzuki has thoroughly studied the nature of sporty, exciting styling in the D-segment and has concluded that the design of the new car should have two themes: grace and dynamism.

Since the overall theme of the third phase of Suzuki's world strategy is status, the expressions of dynamism should not be brash expressions of power. Rather, they aim for styling that's rich in character and conveys a passionate spirit.

The sportiness that Suzuki wants to deliver in the D-segment will perhaps be most directly expressed by the car's dynamics. The kind of dynamics creates a sense of refinement. Suzuki's engineers are striving to devise ways to maximize the quality of the dynamics not only in performance but also in terms of motion that stirs people's emotions. This effort is vital because the kind of sportiness is measured not in terms of times and performance figures but in terms of how it makes people feel. Suzuki has already given form to this thinking in the Swift Sport. Now, they plan to carry it forward and further develop it for the D-segment.

In order to achieve its goals, Suzuki is taking a typically Suzuki-like technological approach. The methodology is to combine and apply proven technologies, thoroughly refining them in user-centred ways rather than pursuing features using spectacular new techniques.

This approach is actually one of the greatest benefits Suzuki has gained from its company's motorcycle business (Suzuki is one of only a handful of companies that produce both cars and motorcycles). With a motorcycle where the man-machine interface is even more crucial than it is with a car establishing the dynamics based on data alone is impossible. 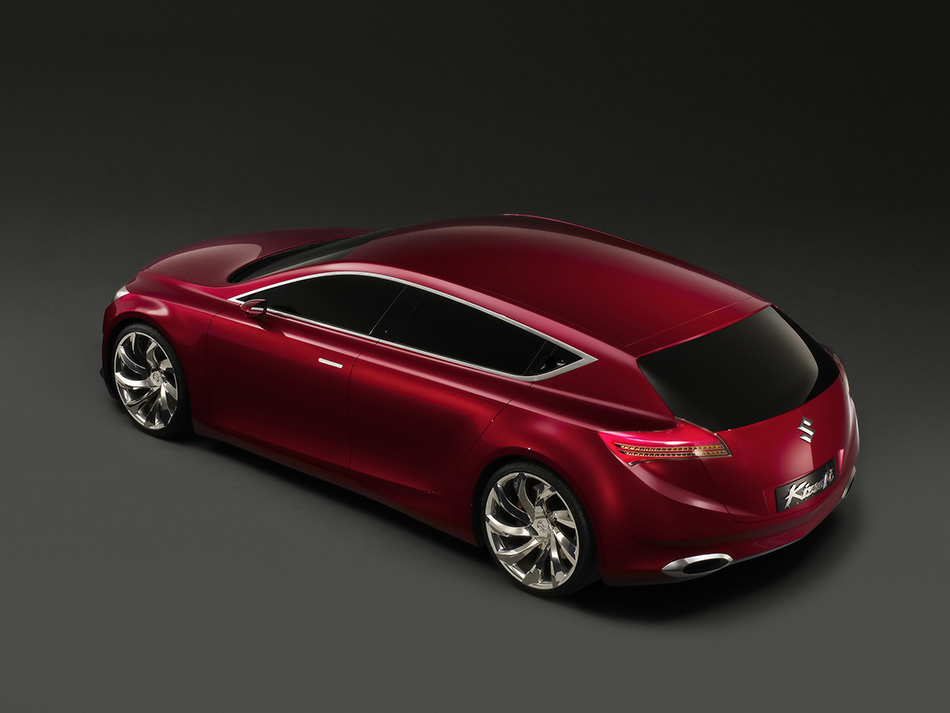 Rather, it's essential to conduct numerous road tests, verifying and interpreting each and every comment from testers and feeding the results back into the design. This method may appear outdated in an industry where virtual-reality technology has become mainstream. Since Suzuki's engineers worked on the Swift, they have been convinced that it's the best way to dramatically heighten the dynamic performance of Suzuki's cars and stir the emotions of users. These factors are behind our focus on delivering a D-segment car that's spirited.

At the same time, Suzuki is conscious of the great demand for environmental compatibility in the D-segment. The main response to this demand is the development of a hybrid car. Its goal is to use a hybrid arrangement (an internal combustion engine provides the main propulsion, and an electric motor provides assistance whenever extra power is needed) to achieve environmental compatibility without sacrificing an emotionally appealing engine feel.

Suzuki is planning to use all-wheel drive (AWD; a technology that Suzuki has refined over many years) to further heighten the car's refined dynamics. For an even better combination of environmental compatibility and dynamic performance, the AWD development targets include the lowest CO2 emissions of any D-segment AWD passenger car.

Suzuki unveils the progress of the new project, a concept car called the Concept Kizashi, at the 2007 IAA Frankfurt show.

Kizashi is a Japanese word meaning prelude or foretaste. The name symbolizes the change within Suzuki.

The Concept Kizashi represents Suzuki's passion for challenges (this is a major aspect of Suzuki's corporate culture), its future direction, and the competitive strengths that are unique to Suzuki.

To fulfill this mission, the design theme for the Concept Kizashi is a dynamic athlete in motion. This is because its D-segment ideals are summed up by the attributes of a great athlete: dedication to sporting challenges, physical strength that comes from hard daily training, a honed physique with no superfluous weight, and the presence and dignity of a champion.