Featuring vastly improved performance, overall refinement, and a larger, restyled design, the RAV4 will redefine a segment it created nearly 10 years ago. The RAV4, which first launched in January 1996, revolutionized the SUV market as the first SUV developed on a uni-body passenger-car platform instead of a traditional ladder-frame truck platform. The success of the first RAV4 spawned the development of the car-based compact SUV, which now commands nearly 79 percent of the small SUV market.

"The arrival of the new RAV4, nearly 10 years after pioneering the compact SUV segment, receives an extreme makeover for 2006," said Jim Lentz, Toyota Division group vice president and general manager. "Completely re-styled, the new RAV4 is larger and more powerful to provide the necessary utility and performance for active singles and the comfort, versatility and convenience to meet the demands of young couples, with and without children."

The 2006 RAV4 is offered in three distinct grades in two- and four-wheel-drive. They include the standard grade, a new performance-driven Sport grade, and the top-of-the-line Limited. All grades will offer an all-new class-leading 3.5-liter V6 engine paired to a gated-shift five-speed automatic transmission. 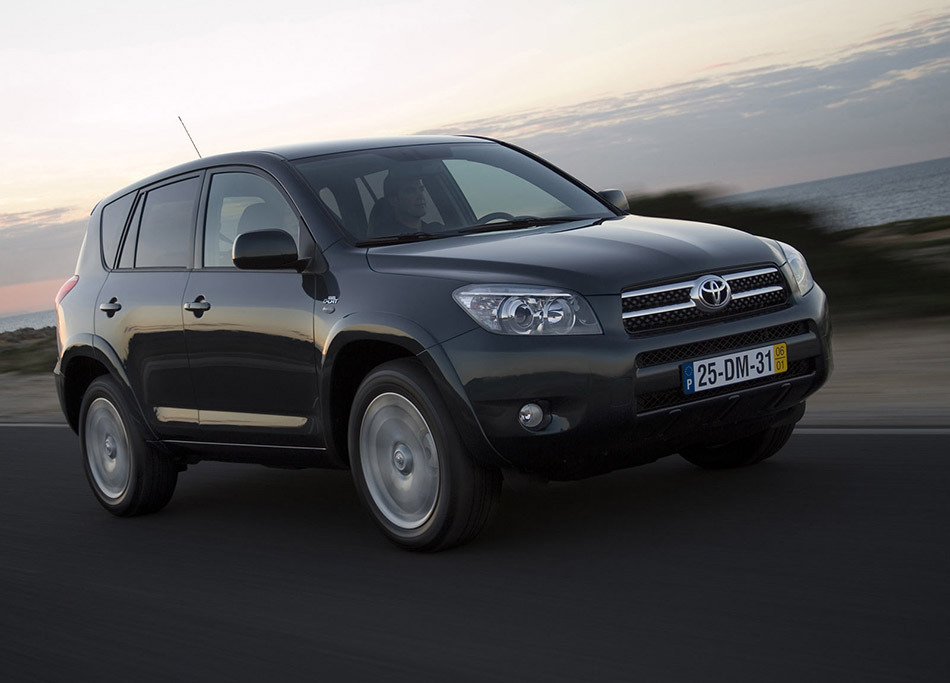 The V6-equipped RAV4 can effortlessly accelerate from zero-to-60 mph in under seven seconds while achieving an impressive estimated preliminary EPA fuel economy mpg rating of 20 city/28 highway for 4x2 models and 20 city/27 highway for 4x4 grades.

The standard powertrain will be an upgraded 2.4-liter four-cylinder engine with VVT-i equipped with a gated-shift four-speed automatic. The engine will deliver 166 horsepower (an increase of five hp) with 165 lbs.-ft of torque @ 4,000 RPM, making it one of the most powerful four-cylinder engines in the small SUV segment and close in horsepower to some competitor V6's. The additional horsepower is matched with improved fuel efficiency with EPA preliminary mpg estimates of 24 city/29 highway on 4x2 configurations and 23 city/27 highway on 4x4 models.

In addition to improvements in power and fuel efficiency, both the V6 and four-cylinder engines are expected to be EPA certified as an Ultra Low Emission Vehicle II (ULEV2).

With an increased length of more than 14-inches over the previous generation, a new seating design features second row seating for three and optional third row seating, a first in the small SUV segment. The larger dimensions create a larger cabin, increasing shoulder room for all passengers, and additional head clearance and legroom for second row passengers, allowing for overall greater passenger comfort.

The vast improvements in the all-new RAV4 will be matched with pricing that is very competitive within the compact segment, making the RAV4 an excellent all-around value.